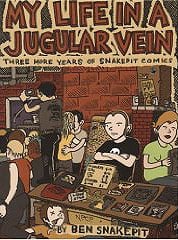 Ben Snakepit chronicles three more years of his life (1/1/04 – 12/31/06) in a three-frame comic-per-day format.  My complaint with his first book was that a mundane, repetitive life makes for a mundane, repetitive comic strip.   Of course, we’re now living in the world of pervasive blogging, Facebook, and Twitter, where mundane narcissism isn’t just accepted but the new gestalt.

Not that Mr. Snakepit’s intentions are philosophical; he views his work as a fun (if sometimes obligational) excersize.   Like his first book, the typical day/comic follows this pattern:  1) I woke up, 2) I went to work, 3) I got drunk/went to a show or party/and-or watched tv.   This second book has some more interesting blips (mainly involving touring),  and his artwork and narrative continues to be cutesy and charming.  Any thoughtful commentary, though, continues to be absent.

This compilation struck me as particularly depressing.  What’s depressing isn’t so much his life’s patterns – I mean, most of us have lives of routine.  It’s more that his life isn’t progressing or even has any substance beyond the superficial, and he might not recognize this even though he’s the one documenting it.   You can flip randomly between comics in his two books, over years and years of his life, and they would be interchangeable.

Not that Ben paints his life as sad or in need of meaning.   He’s happy-go-lucky as ever and perpetually 15 years old.   But his lack of insight is insightful itself, and makes me hope he does have a broad view of his life and can find some meaning in it.

All that said, this book does pass the time nicely on a lengthy commute. 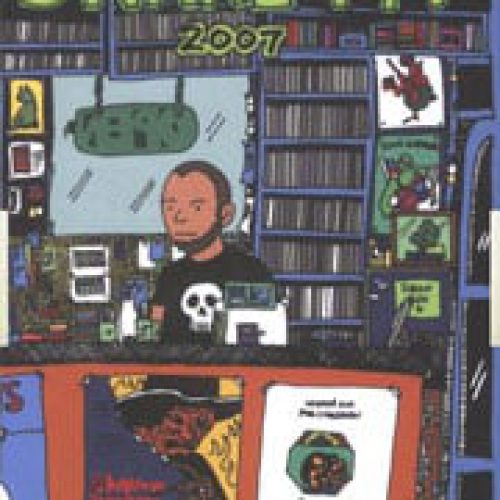