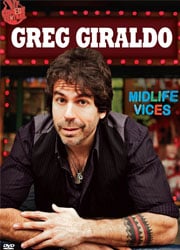 Known for heckling celebrities on the Comedy Central Roasts, Greg Giraldo is a hilarious comedian who never had a one hour TV special before. He’s had a Comedy Central Presents episode though. Midlife Vices is his first hour long stand-up special, which is available on both DVD and CD (uncensored and extended might I add)!

Giraldo was also a frequent guest on Tough Crowd with Colin Quinn, where I first found out about him. He was probably one of the funniest guests on there so I’ve always liked his style of comedy. You can read an old ReadJunk.com interview with him here. His style is sarcastic (what comedian isn’t?) and sometimes takes a bit of time to get to the punch line but in the end, it’s usually worth it. He discusses many things like his divorce, fat children, and politics. He covers a lot of topics in an hour.

At one point in the broadcast, Greg picks out a “fan” for sleeping during his act. Its one thing to sleep during a stand-up act but it’s another thing entirely to sleep during a taping! That’s usually the worst thing you can do at a comedy show because that comedian will pick on you for the rest of the night. Even if you weren’t sleeping and got picked on, they will continue to pick you on. Believe me, I know from experience. But this moron decided to sleep during the performance which it fun to watch! It’s the spontaneous, unexpected things like that, that make live concerts great.

Besides the 1 hour stand-up, the DVD includes the Comedy Central Presents special and a never before seen pilot for one of his shows “Adult Content,” which obviously didn’t get picked up. Hence the never before seen pilot in the title. I see Greg getting his own show sometime soon, or maybe he’ll go into movies? Who knows, either way he’s a funny man and has great material. Be sure to get this on DVD! If you aren’t a fan of DVDs for some reason; get this on CD then ya weirdo!