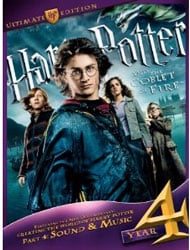 Just like the Prisoner of Azkaban Ultimate Edition DVD, this isn’t an extended edition. Harry Potter and the Goblet of Fire is a good movie, one that has grown on me over the years. If you don’t already own the DVD or Blu-Ray, then this is a suitable option to get.

I already review this movie extensively when the original DVD came out here. But I’ll just write up a quick recap of the movie. Goblet of Fire isn’t your ordinary Harry Potter book/movie. It’s a different year at Hogwarts and the wizarding world. The Quidditch World Cup happens before the school year, which Harry, Hermione, and the Weasleys attend. While there, all this chaos happens as the Death Eaters attack the camps and the Dark Mark is cast in the sky. That means that the Dark Lord, Voldemort is going to return soon. Everyone is cautious but continue on with themselves after that. The kids go to school and find out there’s going to be a special tournament, the Tri-Wizard Tournament. Two other wizard schools attend the tournament. Mad-Eye Moody is the new Defense Against The Dark Arts teacher and begins taking a liking to Harry. When it’s time to cast a vote for the Tri-Wizard Tournament opponents, Harry is forced to participate when someone puts his name in the cup. Harry and the others compete in 3 dangerous games to be the champion. Harry Potter has that going for him that year, as well as the Yule Ball; and that whole Voldemort is going to come back from the dead to kill me thing to worry about.

Goblet of Fire is my favorite book in the series. When I originally saw this movie, I was a little bit annoyed with what they left out. But over time, this movie grew on me and I really like it out of the series. Prisoner of Azkaban I think is the best movie out of the series, but Half-Blood Prince and this one are up there as well. There is something about this whole storyline that I find cool and fascinating, and it’s different than the other books. I liked the introduction to the other wizarding schools (what? No American one?) and loved the Tri-Wizard Tournament stuff. I still have to tell myself that the Mad Eye Moody in the movie (and book) wasn’t the real one. It’s kind of unbelievable that he could be Barty Crouch Jr the entire year but here I am talking about a wizard & witch movie. Goblet of Fire had great special effects, and the younger cast members really grew into their roles with this movie. Not much else to say that I haven’t already say in my other review. It’s Harry Potter and I love all the movies.

Now, since this is called an Ultimate Edition, you’d expect there would be some sort of extended edition. Nope. That’s disappointing to say the least because there’s so much that was cut out from the book. Maybe Mike Newell maybe never filmed a lot of extra stuff? Who knows. The selling point is the Creating The World of Harry Potter Part 4: Sound and Music. An hour documentary featurette about the music of Harry Potter is my kind of featurette! I absolutely love the themes that John Williams has created for the franchise. It’s unforunate he didn’t do all the movies. I think Nicholas Hooper has done a good job with the scores for Order of the Phoenix and Half-Blood Prince. Not really a fan of Patrick Doyle’s score as much as the others. But it was nice to see everyone talking about the film scores and all the sound that’s used for the films as well. It makes me want to be a sound engineer and make sounds for movies. Seems like fun and how you have to get creative to get normal sounds. Besides that, there’s a book, some cards and some fluff behind the scenes piece that aired on TV I think. This also contains the original extras as well.

Harry Potter and the Goblet of Fire is a great movie, but like all the movies in the franchise, aren’t completely flawless. If you don’t already own this one, the Ultimate Edition is worth it if you like to see that excellent piece on the sound and music. Otherwise, stick with the cheaper DVD or Blu-Ray.