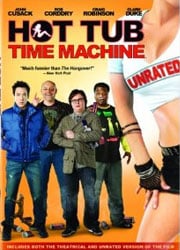 Hot Tub Time Machine is a hilarious comedy that pays tribute to the raunchy 80s comedies, some of which John Cusack himself starred in. If you haven’t taken a trip in the hot tub time machine, you’re missing out!

The movie is about 3 close friends who aren’t doing so well in their adult lives. Adam (John Cusack) is getting divorced and has his geeky nephew (Clark Duke) living in his basement. Lou (Rob Corddry) is a party guy who’s a tremendous asshole and ends up in the hospital after getting drunk and almost dying from carbon monoxide poisoning. And then there’s Nick (Craig Robinson), who was a musician but works at some dog place that’s humiliating. Plus his wife is cheating on him and made HIM change his last name when they got married. To escape for the weekend, they go to a ski resort where they used to love to hang out and party. But this time the place isn’t what it used to be and is kind of a shithole now. They decide to go dip in the hot tub after being magically fixed, and just like the movie title says; it’s a time machine and sends them back to the 1980s. They look like how they looked back then to other people, but really their older selves reliving that particular weekend. They try to make sense of what’s happening and try to find a way back to the present day before they are permanently stuck having to re-live their lives over again.

When I originally saw Hot Tub Time Machine, I thought it was hysterical and one of the funniest movies of the year. I still think that, and think it’s a bit underrated. It came in third at the box office and not as many people saw it but I think it will grow to be a bigger movie on video. It’s going to be one of those movies you’ll always watch when it’s on TV. The cast is great, the story is silly and the dialogue is vulgar as hell. It’s just nice to see John Cusack finally back in a comedy, a place he got his start in. It’s even nice to Chevy Chase in a comedy movie again, even though his part could have been so much better. I think the stand out in HTTM is Rob Corddry, who proved once again he can play a funny asshole (ie. Harold and Kumar 2).

The story was a nice homage to 80s movies, with tons of references to Back to the Future, The Karate Kid, Better Off Dead and loads of other movies. That’s why I like Hot Tub Time Machine so much, because it’s like an 80s raunchy comedy I grew up watching. The soundtrack is a lot of fun too, including the songs Craig Robinson sings towards the end.

The extras for the DVD include a theatrical and unrated version of the movie, deleted scenes and trailers. Honestly, I couldn’t figure out what was unrated about that edition. Everything seemed like I’ve seen it before in theaters. At least add some more scenes in there to not rip off fans that are expecting a little bit more. The deleted/extended scenes were decent. I just liked seeing the actors trying different takes on lines. It was always nice to see a final Chevy Chase in there since that was a gripe I had with the movie. What became of the hot tub repairman?

Overall, Hot Tub Time Machine is really funny and definitely worth watching on DVD and Blu-Ray. If you like 80s comedies, you’ll love this!

Features:
Includes Both The Theatrical And The Unrated Version Of The Film
Deleted Scenes
Theatrical Trailer