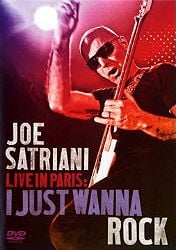 Starring: Joe Satriani
Studio: Epic
Buy On Amazon.com
Joe Satriani is one of the Music’s Guitar Gods and by far is my favorite guitarist of all time, and now fans can check out this live DVD and CD of the Master jamming on the guitar with “Live in Paris: I Just Wanna Rock.” Mixed in with new and classic songs, Satriani always delivers an outstanding performance, unfortunately for this DVD, if you would like a Seizure or develop Motion Sickness, than you might want to stick with just the CD version.

“Live in Paris” was filmed in 2008, during Joe Satriani’s tour in support of his latest record “Professor Satchafunkilus and the Musterion of Rock,” and as usual Joe brought along his talented band mates, Stu Hamm on bass and Jeff Campitelli on Drums. For more than 20 years, Satriani has been performing and releasing music the way he wants to play it. For the most part, that means straight up rocking out and hardly any singing, which isn’t really his forte. Joe Satriani has produced a few big rock songs like “Summer Song” and “Surfing with the Alien,” and new song “Crowd Chant” is fairly popular in Sports Arenas nowadays.

My gripes with this DVD is it’s impossible to watch. Sorry Joe. Whoever you decided to use for this production should never work again on a project like this as far as I am concerned. Poor editing, and cheesy 80s graphics felt like I was being tortured like in “A Clockwork Orange.” If you love having seizures, and Motion Sickness by all means go for it. I am not even kidding. I was watching this DVD at lunch one day and felt like I was going to vomit. I am sure Satriani did not have this intention. Everyone watches his performances for one thing, to watch him play. We don’t want flashy images, crazy strobe lights, and other distracting effects that take away from the genius that is Joe Satriani. His performance on guitar alone is enough for any fan like myself to appreciate. Satriani’s previous DVDs are much better and “Live in San Francisco” is still a favorite of mine. The good thing about this release is that the concert is great, and also available on CD which I highly recommend. Tracks that you wouldn’t normally hear on previous live albums like “Time Machine,” “One Big Thing,” and Joe’s newer songs.

If you can make it through the 2h 15 minutes of Visual torture on your eyes and brain, there is also behind the scenes footage with Joe including concert footage and interviews. I can’t say I can recommend this DVD but definitely the CD version of the concert. It wasn’t a bad concert at all, but watching with all these effects every two seconds, how can you enjoy it for what it is? Joe Satriani is outstanding and some of my favorite albums include “The Extremist,” and “Crystal Planet,” but this is one DVD I won’t keep in my collection.