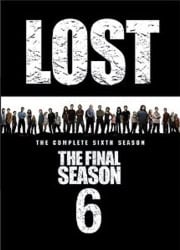 One of my all-time favorite shows is over and it makes me feel a little empty inside. No more reading Lost forums for hours the next day at work, reading stupid, over-analytical Doc Jensen columns on EW. No more discussing with co-workers and friends about theories about what was going to happen next. A show like this only comes around every so often. The hardcore Lost fans have been through the ups and downs of the show, including the talked about series finale. When it comes down to it, you either can accept the finale for what it is or don’t. But you can’t deny that Lost set the bar very high for future drama shows. Even though it didn’t win any Emmys for the final season, I still think Lost is one of the best TV shows in the last 50 years.

Last season was a doozy! Locke ended up not being Locke after all, he tricked Ben into killing Jacob and it turned out that Locke is really the Man In Black. It’s finally confirmed that The Man in Black in actually old Smokie, the Smoke Monster! Meanwhile, did the bomb really go off and work the way the lostaways thought it was going to do? Well they are back in the present, Juliet ends up dying from the fall which puts Sawyer over the edge. The remaining people alive head for the Others temple where Sayid dies and comes back to life. Zombie? With this season, the other important part of the show is the flash-sideways. You see an alternate reality in a way, where flight 815 lands safely in LA, and everyone goes about their own ways. Slowly but surely, each person begins to remember a little bit of something from the Island world. Some have full awakenings, some take a little longer to realize what’s going on…like Jack for instance.

Back in the real world of Lost, we find out that Smoke Monster intends to kill everybody on the island if they don’t join him. His true intention is he needs to kill Jacob’s candidates in order to leave the island, which is what he really wants to do. He wants to go home for some reason. The candidates were hand-picked by Jacob to replace him and take care of the island. One by one, people begin to take sides and either join Smokie, or die, or well, fight him. While that is happening, Charlies Widmore and his crew of mercenary nerds find a way back to the island via the submarine. They plan on taking down the Smoke Monster, and he brought along a secret weapon…you guessed it, Desmond!

Twists and turns happen throughout the show, but when it comes down to, it’s the remaining Lostaways vs The Smoke Monster. No Holds Barred Island Death Match! SUNDAY SUNDAY! Anyway, how do you defeat something that is dead and in the form of smoke you say? Well you’re gonna just have to watch to figure out what happens. But even when you do watch the series, your brain is still contemplating what just happened. With every season of Lost, just as one question is answered, several more pop up. The sad thing is not everything is answered which is why I think a lot of people were pissed off about the finale.

I was honestly disappointed in the finale (at first). I seriously had to watch the last 15 minutes a few times to make sense of it all. I can sort of get what they were going with it but not sure I’m still happy with the way it ended. But then again, most TV shows don’t end the way the viewers want. I wasn’t happy with Sopranos or Seinfeld finales. I was very happy with The Shield’s finale though. That’s a show that got it right. But finale aside, this season had it’s ups and downs but I still felt it was a very strong season. We got answers every episode, which is something nice for a change in the Lost world. I think one of the episodes that stood out the most was “The Candidate.” After seeing what happens in that, its both sad for the characters that perish but also because you know the end is near. I always loved the Desmond episodes, and felt that was a strong episode as well, and liked how he was in the sideways world as well. Giving everybody a light push (well not Locke) in the right direction. Matthew Fox’s Jack had a great season and he finally wasn’t acting like a giant douche. Josh Holloway, Terry O’Quinn, Jorge Garcia and of course Michael Emerson all had wonderful seasons as well. Not sure what I felt about crazy Claire coming back. I kind of wished she was killed off. I found myself shouting at the TV a few times, kill the crazy bitch!

I think another episode that stood out, but in the wrong way was the Jacob flashback episode. I think what hurt it was the teen actors. They were just awful and kind of took me out of the episode. I also think having that particular episode late in the game kind of throws the rhythm off. It would have been better in the middle of the season I think. It was nice to know that the Smoke Monster was Jacob’s twin brother and get a few other details about Jacob and the island. That episode especially was important just because of what happened in the finale. But the kid actors sucked in it. On the other hand, the Richard Alpert centric episode was nicely done. I thought more could have been explained with it but I was happy when I finally got to know more about Richard. As far as the sideways stuff is concerned, originally I was pissed because I felt like all this stuff didn’t matter. Like who cares if Jack has a son that isn’t really real. But once you get a sense of what it’s really about and what the finale explained, it all makes sense to me now. It’s nice to see all the original actors come back that died on the show, and it was a fitting send-off. Everybody was moving on.

The biggest thing I wanted to watch on the DVDs were the special features. More importantly, I was anticipating the 12 minute epilogue which is what happens after the finale. Hurley is the new man in charge, and Ben is running around and fixing things that weren’t right when Jacob ran things. The epilogue is okay, and does explain some things that were left unanswered from the series finale. But in the end, it just makes you want more Lost but that’s probably the idea. Watching the epilogue isn’t necessarily a must-see for people who are still confused, but it’s a must-see if you’re a hardcore Lost fan like myself.

The rest of the bonus features were excellent! The featurettes The End, A Hero’s Journey, On Location were done very well and gave fans a lot of behind the scenes stuff. You see how emotional the cast members and crew got when it was there turn to finish off their characters’ scenes. Hell, I was even getting a little weepy. If you watch anything on the DVD special features, definitely watch those 3 featurettes. Although, the deleted scenes were okay and filled in a few more gaps for character development in the final season. The Lost Bloopers were funny, particularly the scene where Matthew Fox is trying to act serious and has to contend with a rooster that wouldn’t shut up. All in all, good extras and worth watching if you’re a fan!

So Lost is over and I’m a little sad about it. I kind of wish Damon Lindelof and Carlton Cuse would write a Lost movie or TV series or something, but not sure how that would work. It will only be a shell of what the show is and fans don’t want something second rate so it’s best to just leave the show the way it is. Like the show said at the end, it’s time to move on. So sit back, enjoy Lost for what it is on DVD (or Blu-Ray) and see ya in another life, Brotha.

Features:
The New Man In Charge – As One Journey Draws To An End, There Will Always Be Tales Left To Be Told. Go deeper Into The World Of Lost In This Exclusive, New Chapter Of The Island’s Story
The End: Crafting A Final Season – Join The Lost Team Along With Other Producers Of Some Of Television’s Longest Running Shows As They Examine The Challenges Of Ending A Landmark Series.
A Hero’s Journey – What Makes A Hero? Which Survivors Of Oceanic 815 Are True Heroes? These Questions And More Explored
See You In Another Life, Brotha – Unlock The Mysteries Of The Season’s Intriguing Flash Sideways
Lost On Location – Join The Cast And Crew In This Fun, Inside Look Behind The Scenes From The Set In Hawaii
Lost In 8:15 – A Crash Course
Lost Bloopers
Deleted Scenes
Audio Commentaries

Bottom Line: The finale could have been better but Lost is truly one of the best TV series ever!
Running Time: 802 mins
Rating: NR
Extras Rating:
Overall Rating: