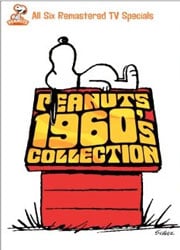 “Peanuts” is now available on DVD in an excellent 1960s DVD collection containing 6 TV specials. While I was never really a fan of Charlie Brown, Snoopy and the rest of the gang; I decided to give “Peanuts” another chance. Maybe I’m just in a different generation, but I still find “Peanuts” boring and sort of depressing.

“Peanuts” was a successful comic strip created by Charles Schulz, and later made into TV specials. It features Charlie Brown, a young depressing kid who seemed minutes away from suicide. Charlie’s pet beagle is Snoopy, who sometimes imagines himself flying his doghouse in WWI. So you got a suicidal boy and a delusional dog. Great cartoon right? Other characters include Linus who carries around his blanket, Lucy the bossy snob of the group, Charlie Brown’s younger sister Sally, who has a crush on Linus. Then there are characters like Peppermint Patty, Schroeder, Pig-Pen, Frieda and more. Usually each cartoon features the kids picking on Charlie Brown and Charlie getting depressed about it.

The first TV special on the DVD is “A Charlie Brown Christmas.” This is the most popular Charlie Brown cartoon, since it’s played more than once every year during the holiday season. For me personally, I never really liked this one. I prefer Rudolph and Snow and Heat Miser. Something that is a little more uplifting and not depressing like Charlie Brown. I find it funny that every year I try to get a Christmas tree and it ends up like the one Charlie Brown picked out. Charlie Brown’s All-Stars is the next special, and it’s about Charlie Brown trying not to suck at baseball. He has to pick whether or not to become an official team get uniforms but has to kick the girls off the team or just be a team that plays unofficially. It’s a good cartoon that shows that Charlie Brown isn’t such a loser after all for sticking up for his female friends. Of course it takes awhile for the girls to realize that. Silly, mean girls.

Like I said above, I’m not really a fan of Charlie Brown cartoons. I think the cartoons are too slow and boring for children. Considering I still feel like a kid when I watch cartoons, I just didn’t find most of these all that interesting. I did appreciate the animation, the characters and the brilliant score from Vince Guaraldi. Jazz isn’t something I usually end up liking but it works for the Peanuts cartoons. It’s something about the music that is soothing to listen to, especially right before bed. I love the theme song to Peanuts! It’s one of the most recognizable themes out there. I like the characters Schroeder and Linus, but the rest kind of always bugged me. Linus always reminded me of myself, since I still carry around blankets. Hey, they are comfy, leave me alone! I don’t care if its 90 degrees, I need to sleep with one of those blankets.

As for Charlie Brown, this character is just so depressing and such a loser. I’m surprised there wasn’t a “Don’t Kill Yourself, Charlie Brown’ TV special. I don’t really know why Snoopy was such a lovable character. The dog is kind of annoying to me. But with that said, I can still sit through the specials and appreciate them for what they are. But they are something I don’t go out of my way to watch.

If you like Peanuts and the score from Guaraldi, you’ll definitely want to check out an excellent featurette on the jazz composer. It’s over a half hour long and has lots of interviews with various musicians and people part of his life. This DVD is a nice set for Peanuts fans. While some specials were fun to watch, I don’t think Peanuts is all that interesting in the end.

Bottom Line: Great set of cartoons but some of them are boring to me
Rating: NR
Running Time: 150 mins
Extras Rating:
Overall Rating: