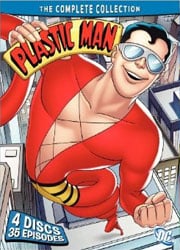 There has been a ton of stretchy superheroes created but the only two that I can think of is Plastic Man and Mr. Fantastic. The “complete” collection of Plastic Man cartoons is available on DVD now from Warner Bros and this should make animation fans happy!

I’m not going to get into the whole background as to why Plastic Man is stretchy and plastic. If you want to know, read the Wikipedia entry. The DVD is a collection of Plastic Man cartoons from The Plastic Man Comedy/Adventure Show. The show featured other non-Plastic Man cartoons as well but sadly, none of those are included on the DVD. The ones not included are: Mighty Man and Yukk, Fangface and Fangpuss, and Rickety Rocket. Plastic Man is a crime fighting superhero that can stretch, turn into various things like a ship, plane, a ball…you name it! Each episode he goes up against funny looking villains like The Clam, Half-Ape, Carrot Man, Doctor Dome, and Doctor Honctoff. Pretty much put a weird object or animal word in front of the word “man” or “guy” or “Doctor” and you got yourself a Plastic Man villain. Along for the ride is Plastic Man’s Polynesian sidekick Hula Hula and future wife Penny. In later episodes, Plastic Man and Penny get married and have Baby Plas, a mini version of Plastic Man. But for some reason, those episodes aren’t included on the set. Everyone hated the little baby on the show but those are the episodes that I remember as a kid. I’ll probably end up hating those episodes if I saw them now.

Other episodes not included on the collection disc were all the other shows part of the Plastic Man Comedy/Adventure Show. Honestly, I love those episodes just as much as Plastic Man. Mighty Man and Yukk was hilarious, and I loved it as a kid. I also loved Fangface and Fangpuss cartoons but I don’t really remember Rickety Rocket. Maybe they will release those cartoons as their own DVD sets? One can only hope since I love Hanna-Barbera cartoons. The Plastic Man cartoons brought back a lot of memories for me since I grew up watching these cartoons live and in syndication. I even remember the live action Plastic Man that would introduce the episodes and segments. I loved coming home from school and watching these episodes, along with Woody Woodpecker, Flintstones and the Jetsons. I also loved napping during these shows too. After watching some Plastic Man cartoons, I realized how similar these cartoons were to Scooby Doo, just minus the laugh track. It has the same style of animation, a lot of familiar voice-over actors, and same style of humor on the show.

When this show came out, were Hawaiians upset over the character of Hula Hula? What a name right? Just as offensive as Injun Joe; you gotta love old cartoons haha. I’m curious who came up with the design of Plastic Man. He’s got white goggles, and red tights that are pretty high up there. I wouldn’t be surprised if his ass cheeks are hanging out of that thing or something a lot worse. He looks like a 70’s porno star. But anyway, the cartoons were enjoyable and fun to watch. I like the variety of villains Plastic Man went up against. The names and characters are a bit ridiculous but it was still funny to see who he went up against in each episode. I don’t know what the point to his sidekicks were, since they didn’t really do much. The voices for the characters are irritating as well.

Obviously, fans of the show will want to get this DVD but beware, the other non-Plastic Man cartoons aren’t included on this set. They were part of the show yes, but they aren’t Plastic Man. Bonus Features included on the DVD set is a retrospective featurette and an unaired pilot episode. Hanna Barbera cartoon fans will want this set to include in their collection!