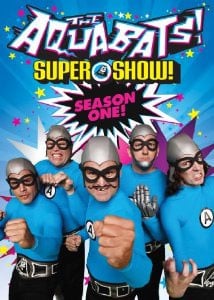 The Aquabats finally have their TV series and it’s a fantastic and super rad! The Aquabats Super Show brings me back to my own childhood and all the TV shows I used to watch. If you have a young one or you’re still young at heart, you’ll get a kick out of the Aquabats! Super Show!

The Aquabats play in a ska band but they also kick-ass superheroes as well. Or at least they like to think so. There’s The MC Bat Commander (Christian Jacobs), who’s the leader of the group who doesn’t have any superpowers but is a good commander. Ricky Fitness (Richard Falomir) can run really fast, Jimmy The Robot (James R. Briggs, Jr.) is a robot that’s smart and can shoot lasers out of his fingertips, EagleBones Falconhawk (Ian Fowles) who shreds the guitar and can summon “The Dude” and then there’s Crash (Chad Larson) who can grow really big when he’s emo. Each episode they fight bad guys, watch random cartoons about themselves and sometimes they just like to rock out.

I’ve been a fan of The Aquabats since their first or second album and have been a fan ever since. In their early days they were more ska but now they are just rock it seems, with influences in surf rock, punk, rock, and other stuff. To this day, the band are still one of my favorite bands to see live. I didn’t know if the TV series would be extremely cheesy and unwatchable. It’s cheesy and campy but it’s done on purpose so it’s all good. I’m actually surprised how much I love this TV series and it brings me back to TV shows I watch when growing up. This series is meant for all ages I think, even though some of the evil characters can be a bit terrifying even in puppet costume form.

Christian Jacobs who is the Bat Commander also co-created Yo Gabba Gabba so he obviously knows how to make an appealing TV series meant for both kids and adults. You can tell there aren’t that many shows like this. The fake commercials that they air in the episodes are hysterical and give Saturday Night Live a run for its money. But not like those commercials are of high standard. The episodes have a quick cartoon or two, one featuring the Aquabats in anime form and then another of the Aqua Bat guy. About the only thing I don’t like is the anime Aquabats in the episodes. I like the idea of a cartoon but not a fan of the anime style animation. Another funny thing that you can see in the episodes is this random guy in a Fox suit running in the background for each episode. It’s a fun trying to find him each episode.

Sadly, this show isn’t available on Blu-Ray yet but I’m hoping it does at some point. I watched the show originally in HD so not sure the reason behind the inferior video format. But in any event, the special events for the DVD include audio commentary with the group on selected episodes, gag reel, the original pilot and some behind the scenes stuff. I like listening to the commentaries because I already saw the episodes and wanted to know more about them. Basically, the guys had no money and a lot of people did favors for them to film or use them in scenes. Sometimes there were fans in the scenes, sometimes it was family members. They did get an occasional special guest like Jon Hader, Lou Diamond Phillips, Matt Chapman of Homestar Runner, Paul Scheer, Samm Levine and Weird Al!

If you want to watch a fun show, check out Aquabats Super Show! Even if you don’t like the band, you might enjoy this. I just wish this was available on Blu-Ray and in Widescreen.