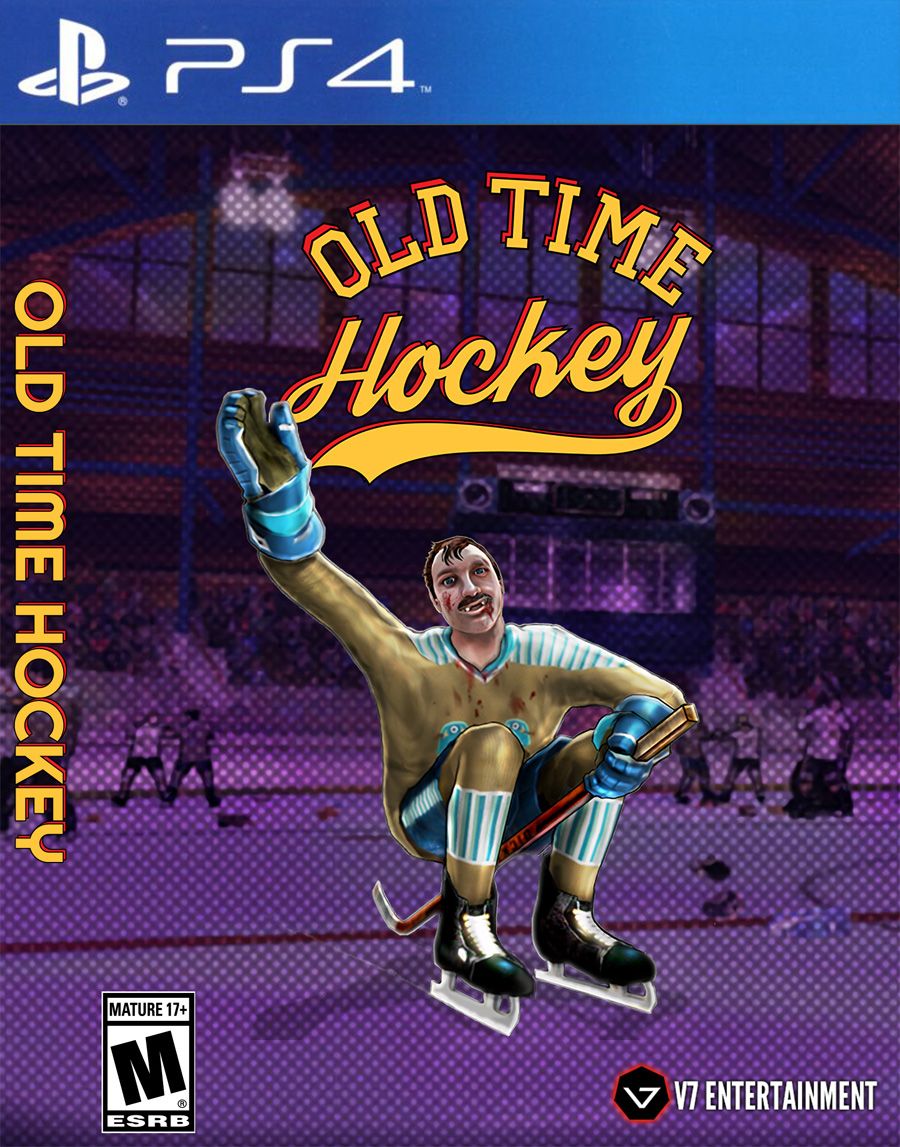 What happens when you take classic 90s arcade hockey and combine it with 70s era Bush League hockey? “Old Time Hockey” is the bastard lovechild of those two combinations.

“Old Time Hockey” mixes together 5-on-5 overhead-style hockey reminiscent of “NHL ‘94” or later games such as the “NHL Breakaway” series with teams and players that you would expect to see in the movie “Slap Shot”. The game steers away from the simulation style play that you’ll see in every current hockey video game, instead aiming for over-the-top arcade fun and violence. There’s bench clearing brawls, bald helmetless players with no teeth, stick fights, referees in orange striped jerseys, head-over-heels hip checks and lots more violence than you’ll ever see in an NHL-endorsed video game.

The story mode follows the Schuylkill Hinto Brews, a failing Bush Hockey League sponsored by a beer company, as they try to make the playoffs against nearly impossible odds. The early parts of the story mode act as the tutorial teaching you how to perform new skills such as poke checks, dekes and puck dumps. I had quite a few technical issues in the early versions of story mode and I got to a point where a particular game crashed each time I was trying to play. Thankfully that was patched early on and I was able to continue. Looking at the story mode from a gameplay perspective, I definitely wasn’t a fan of the setup. I can understand that the team that you play in story mode is supposed to be bad for story purposes but they basically had all of their star-rated skills wiped from them and it felt like I was playing the “Dark Souls” of hockey video games. You also couldn’t perform many necessary skills on the ice until the story mode decided to teach you them. Sometimes it would take four or five games in to learn something such as a poke check.

I felt handcuffed by the teams’ lack of skills more so than I did anything else. Thankfully you don’t actually have to win any of the early games to move on in story mode, which is a good thing since you’re in for quite a losing streak until a win is necessary. There were patches later on that helped with the difficulty of some of the challenges.

There are multiple controller settings for “Old Time Hockey”. The first one that I tried out was the classic two button mode which is an homage retro hockey games like “Blades of Steel”. It was a simple and fun point and click setting that is a breeze for a player of any skill level to learn. There is also a beer mode controller setting in which you can completely play the game with one hand while holding a cold, refreshing beverage in the other one. That mode definitely takes some out of the box thinking to get used to but it was a blast trying to play that way. The final controller setting is the advanced mode. After playing through the story mode and learning the skills through the challenges, I don’t think that I can ever go back to playing any of the other settings. The advanced mode makes use of every button on the PS4 controller and allows you for much more control on offense and defense. Being able to skate backwards, try for the poke check and then slide in to block a shot in front of the net was so much more enjoyable than check, check, check, pass.

I must not forget to mention the games’ soundtrack which consists of a good mix of classic arena organ anthems as well as some damn good songs about hockey. You get the classic “The Hockey Song” by Stompin’ Tom Conners, the Donnybrooks folk/punk ode to hockey and game title track “Old Time Hockey”, the Addams Family theme song and an added surprise for me…Bad Manners version of “Can Can”. Ska and hockey….mmmmmm.

When all is said and done, what impression did “Old Time Hockey” really leave on me? Taking the technical issues and story mode gripes out of the occasion, I found myself going back to story mode to play one or two more games before dinner or repeating a challenge that I may have missed just to be a completionist. I have fond memories of “NHL Breakaway ‘98” on the Nintendo 64 for it’s somewhat arcade feel, simple graphics and multiple game modes. I would consider that game my personal favorite hockey game. With a little more love and care, I can see the “Old Time Hockey” series moving quickly up my list. It truly is a love letter and homage to the early violent days of minor league hockey, the movie “Slap Shot” and retro hockey video games. I appreciated the added flair of the team backgrounds and rivalries in the story mode as well as v7 Entertainment’s dedication to making an arcade hockey game from scratch with fictional players and teams. While the graphics aren’t cutting edge current gen, they don’t have to be. Seeing coaches hanging out on the bench in their letterman jackets and porno mustaches in glorious 64 bit is exactly how it should be.

Maybe you haven’t played the dozens upon dozens of EA NHL video games, maybe you’re not really much of a hockey fan or maybe you are just looking for something out of the ordinary to fill the void of NHL affiliated hockey video games. “Old Time Hockey” is something that you and your friends can pick up and play on the cheap all the while giving you a good laugh along the way. The game is reasonably priced at a measly $12 for a digital download on both Steam and in the Playstation Store. You just cannot find a better deal for a new hockey game than that. Pick it up and support indie game developers. Here’s to hoping that this isn’t the last that we’ve seen of the Bush Hockey League.