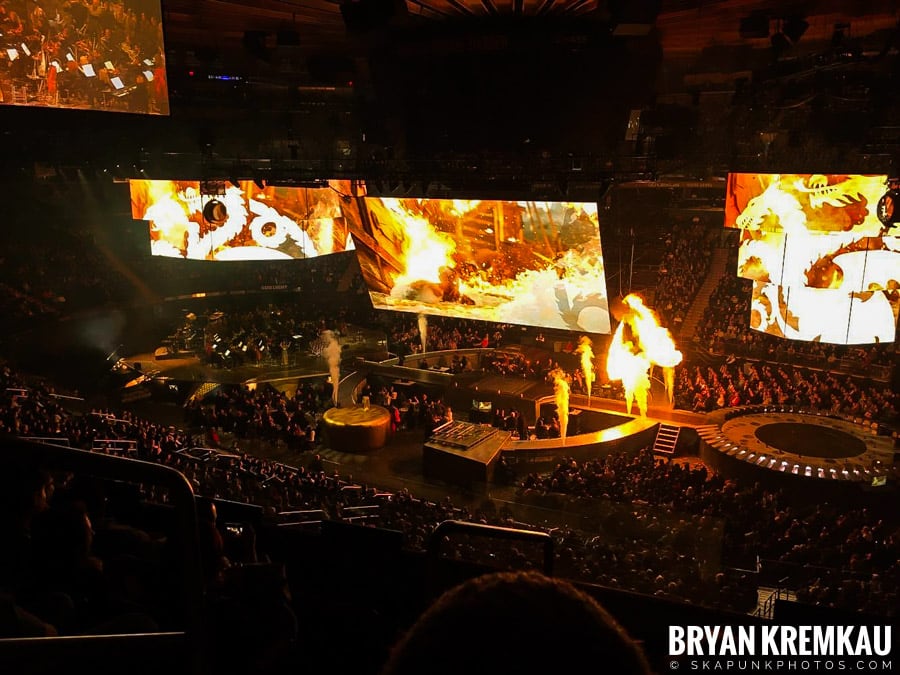 I’ve been wanting something like this for years and it’s finally happened. Composer Ramin Djawadi has brought the fantastic music from Game Of Thrones on a massive tour in stadiums and arenas. The NYC concert was at the World’s Most Famous Arena, Madison Square Garden in New York City! This concert was nerdy good fun and quite epic!

This was the first concert my wife and I went to together since our son was born year and a half ago. So it was definitely nice to get out together for a change. After getting some dinner, we hung out in the lobby and looked at the overpriced merch. That didn’t stop my wife from getting a shirt. I ran into Jon Snow holding up a “Winter is Coming” sign and then we waited for the doors. We thought doors would be open at 7pm, but that wasn’t the case and more like 7:15pm. Guess the concert started at 8:15pm.

Once the countdown clock started, roar from the crowd went up. Then more waiting. We had a guy behind us take our picture, which was nice. There was still a lot of empty seats, which is pretty typical of NYC and of the Garden. It’s kind of annoying that people can’t get to their sets early. Everything filled in halfway through the first set. The stage setup was very impressive; I can’t imagine how much it cost to put this show on. The amount of crew, roadies, orchestra and other touring musicians…no wonder why tickets were expensive but honestly, it was well worth it!

Ramin came out and introduced himself and then went into the Main Title for the show. That got tons of applause because as it’s playing, the Iron Throne appears from the middle of the stage. It was so awesome to hear the Main Title after all these years of watching the show and listening to his music. I thought the sound might have been crappy at the Garden for this type of concert but that wasn’t the case. The sound sounded so good, I thought it might have been pre-recorded. I certainly hope that wasn’t the case haha. After the Main Title, he played a suite of all the different characters and houses. Every time some character came on stage, the crowd would cheer and roar. Or boo in the case of Joffrey and Ramsay. After that, Ramin introduced the touring musicians that played on every date with him. The orchestra and I think the choir were local NY orchestra. Then he said a special guest was here, and it was Bran himself: Isaac Hempstead Wright. If you follow Game of Thrones Instagram, you kind of got spoiled by that special guest announcement.

At this point, we were hearing stuff behind us and apparently the guy who took our photo was being kicked out of the concert. I guess he was sticking his leg in the aisle since the Garden seats are so damn small. The usher bumped his leg and he apologized to the guy. I guess he did it again, he touched the usher or punched him. The usher told him to stop and he said he wasn’t going to be thrown out and to go get security then. Well, security came and kicked him out. I talked to usher later on and asked him about it. I said, who would have thought you would be assaulted at a Game of Thrones concert haha. He’s like, I never get touched or punched at Rangers games. Besides that, there was an annoying couple talking the entire time across the aisle from us. Some people shouldn’t leave the house because they don’t know how to act in a public place. I’m all for people shouting out things if it’s funny though. There was a lot of it and it was hilarious! People throughout the concert would scream “THE KING OF THE NORTH!!” or “SHAME!” OR “MHYSA.” That happened throughout the concert and it was funny every time.

Ok back to the concert, the first set included music of the Greyjoys (“What is Dead May Never Die”), Daenerys, Stannis/Melisandre (“Warrior of Light”), Battle of the Blackwater, some music from the Wall and Jon Snow/Ygritte. Arya’s Needle song was played, where Ramin came out in the middle of the stage to play one of his favorite instruments. I was thoroughly impressed with the touring musicians and setup. We were clearly on the better part of the Garden because we got to see the featured musicians more on our side. The cellist would play and there was this glass section underneath that contained water. Every time he stomped, water would be splashing around. That was awesome! People sat near the stage, wonder if they got splashed on. For Daenerys music, all the percussionists went to the main center stage and played, and that was great to see.

“Rains of Castamere” was played and after Ramin said you know what’s next, and “lock the doors!” They played the clips from Red Wedding, somewhat censored, along with the music from that iconic moment on the series. They played music from the battle at the Wall and that was pretty cool to see because confetti was coming down from the massive rig to make it look like show. One of the guys that played all the flute style instruments, came out with 14 foot long didgeridoo sounding instrument. I always liked hearing that in the score so now I know what is producing that sound. Can’t think of what the instrument is or even if I could pronounce it if I knew. After that, there was intermission which gave time for the crew to clean up the snow and replace instruments and stuff on the stage.

Ramin and the orchestra, choir and touring musicians came back to play a longer second half and just as impressive as the first. I never thought much of the Daenerys music when listening to it, but it was clearly a highlight of the concert. It was the most uplifting, powerful and the choir were singing in full force. As the concert went on, newer music from newer seasons was played. The stuff with Jon Snow getting stabbed and coming back. They played music from The House of Black & White, Sons of the Harpy and when Daenerys takes flight on Drogon, the High sparrow music. The music for when Daenerys is conquering the boats and riding Drogon was epic. Fire rang out of the screens and from the stage. The music from Battle of the Bastards was played. The crowd was booing Ramsay profusely; that was funny. The piece everybody was waiting to hear…”the Light of the Seven” was amazing! As soon as that music played on the show, I wish I could hear it live and that wish came true last night! Ramin appeared from the part of the stage where it features solo musicians. He was playing whatever he was playing so beautifully, then the orchestra kicked in. The screens were all playing that infamous scene and then when the wildfire lit up, all the screens light up green. Smoke and green flames rose from the bottom of the stage and it was very cool to see.

Ramin thanked the crowd after the applause. They played “the Winds of Winter” I think, which gave fans glimpses of the characters of where they were at the end of Season 6. We got a brief teaser for Season 7 in production video at intermission but man, can’t wait for the new season in the Summer time. After seeing this nerdy, epic, amazing concert last night. I want to re-watch the entire series now! Ramin Djawadi is an outstanding composer, and the fact that he is doing this tour every night proves his brilliance. I love seeing classically trained musicians act like rock stars, because last night they certainly were!

If you have a chance to see this tour, DO IT! Valar morghulis.

Seven Kingdoms. One Garden. Sold Out. @thegarden in #nyc 3.7.17 #gameofthroneslive

Here are some crappy cell phone photos I shot from the night: 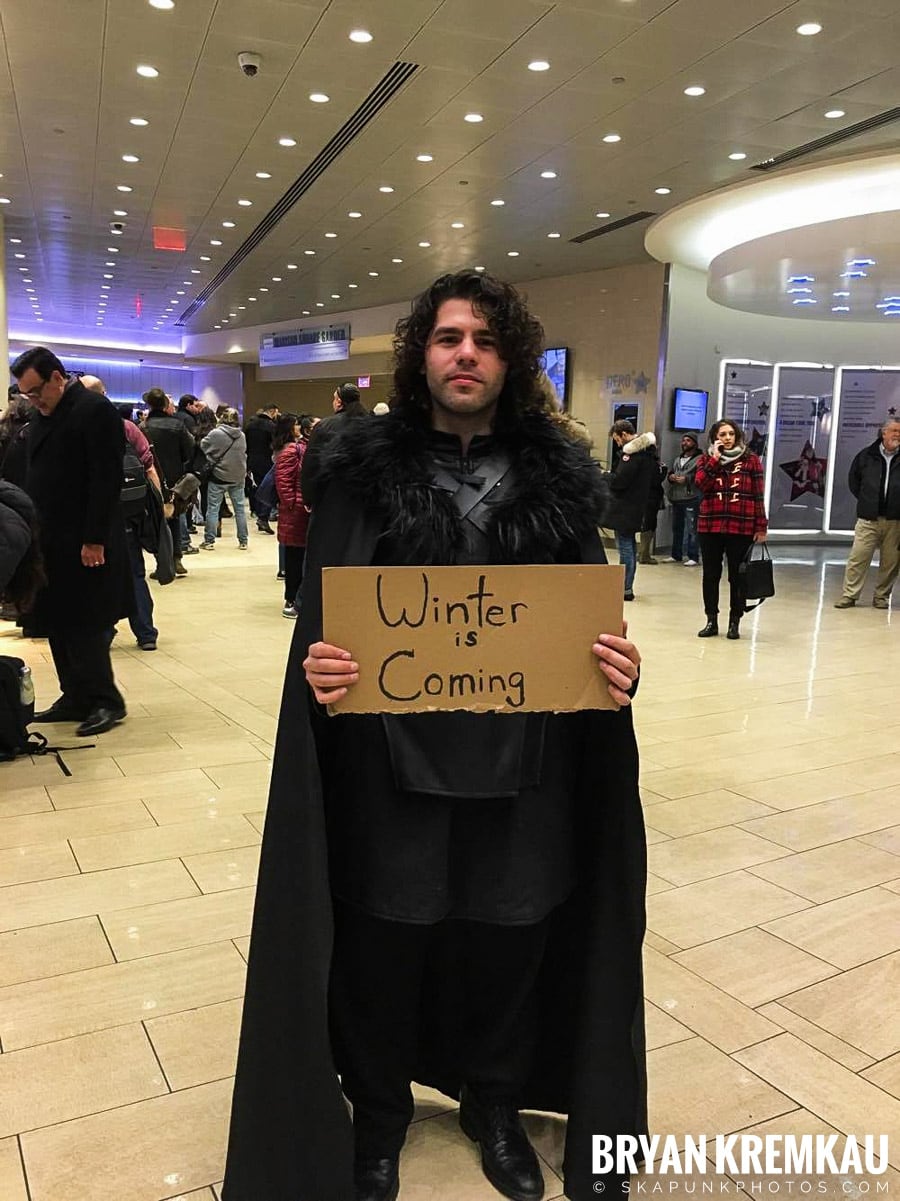 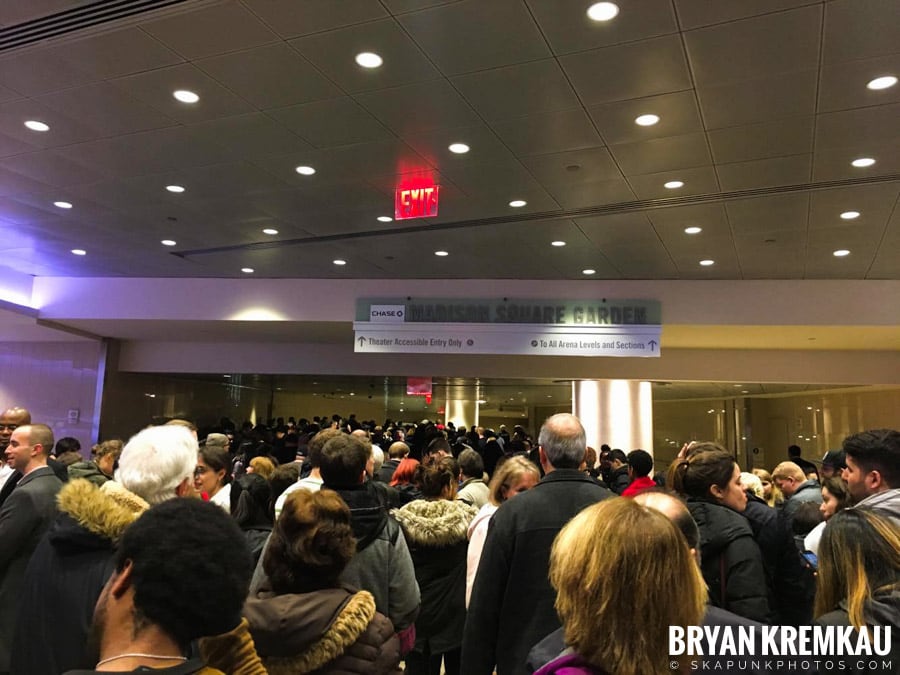 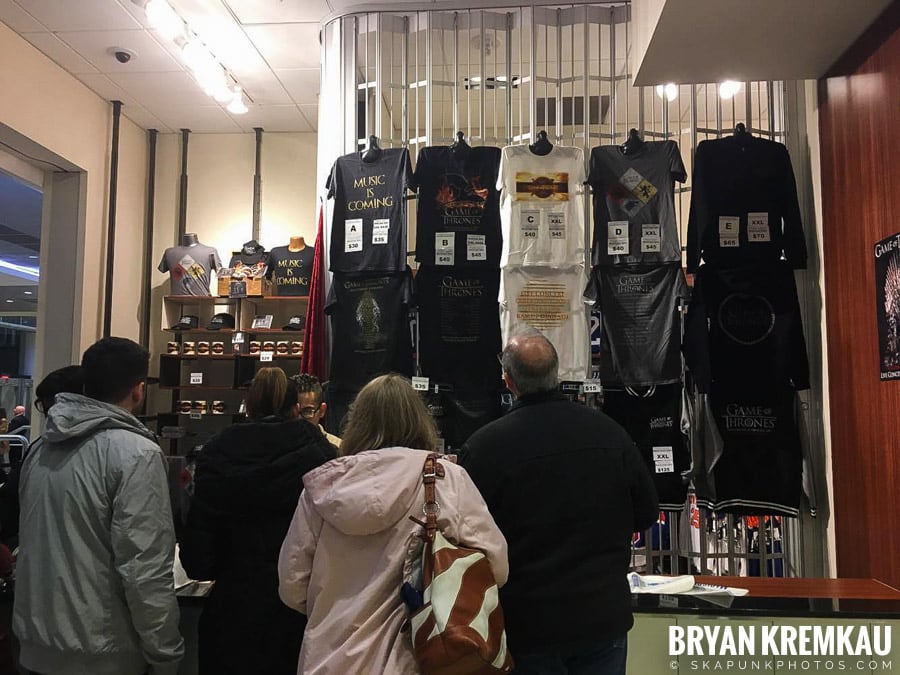 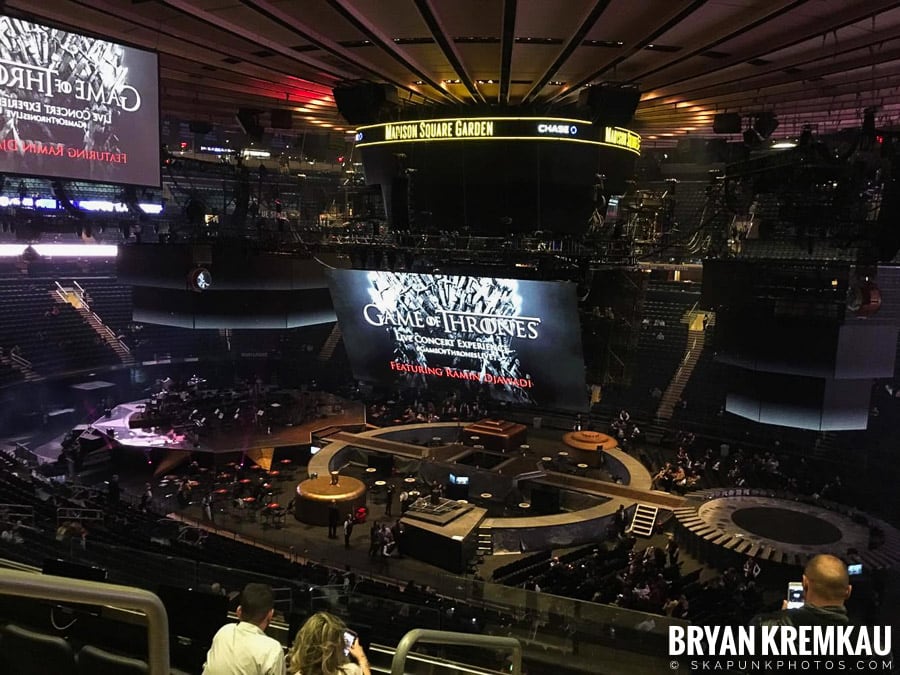 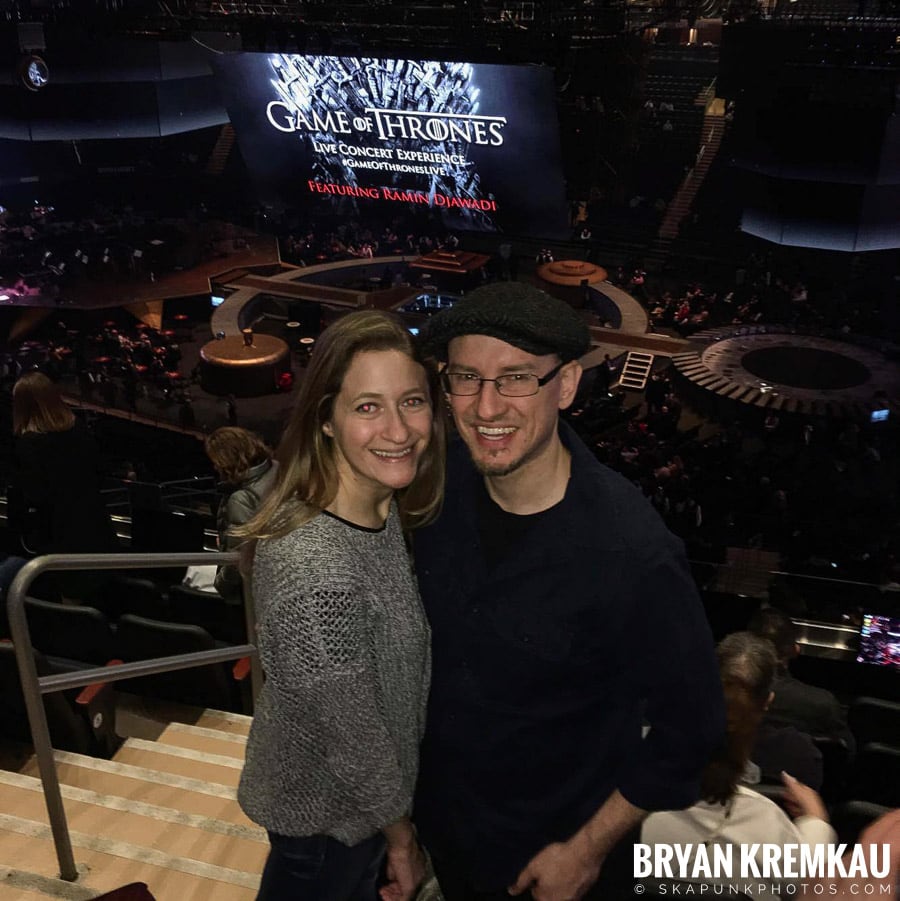 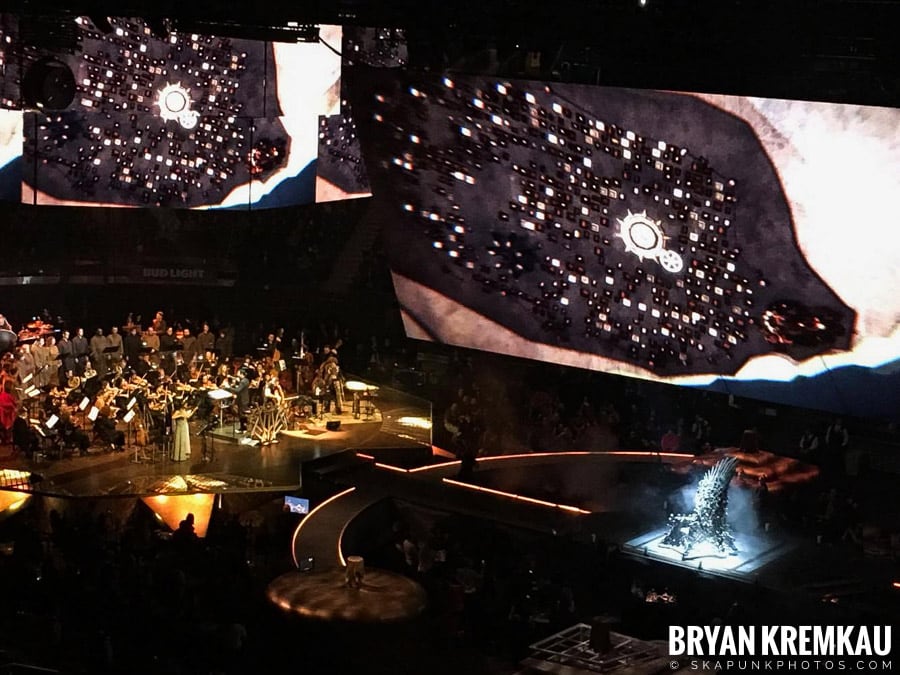 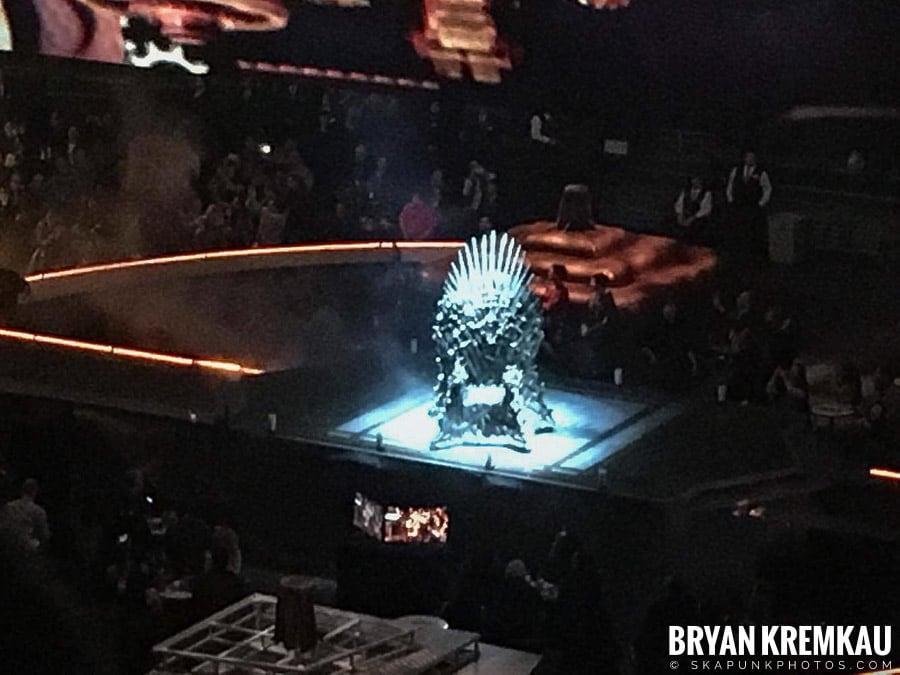 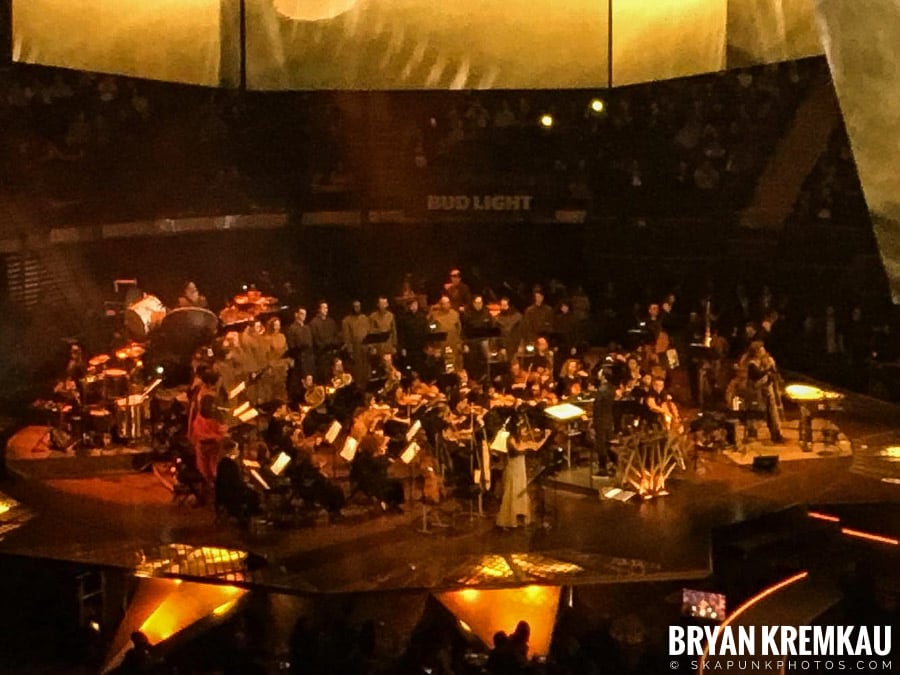 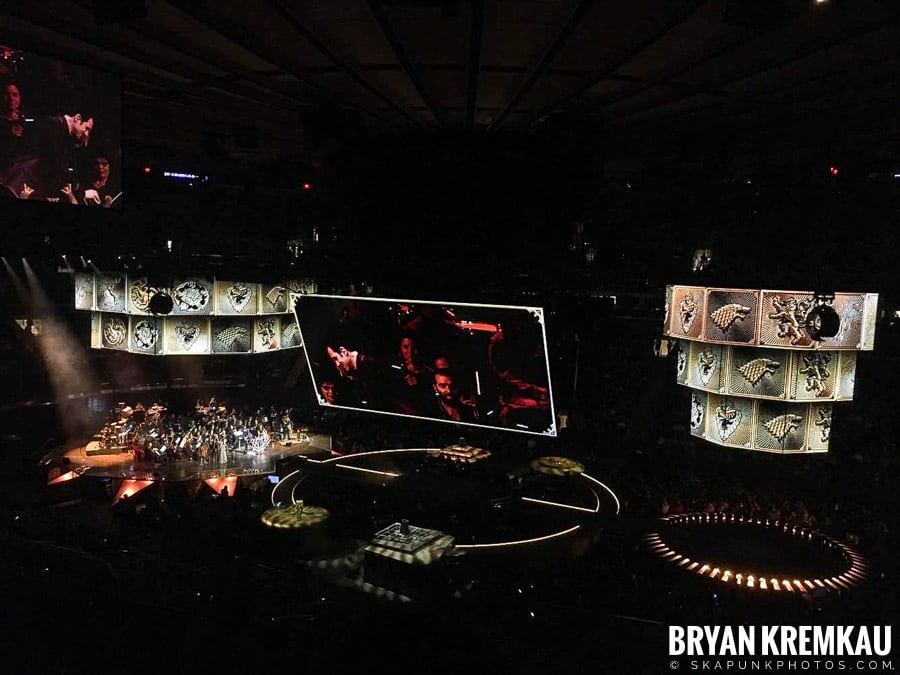 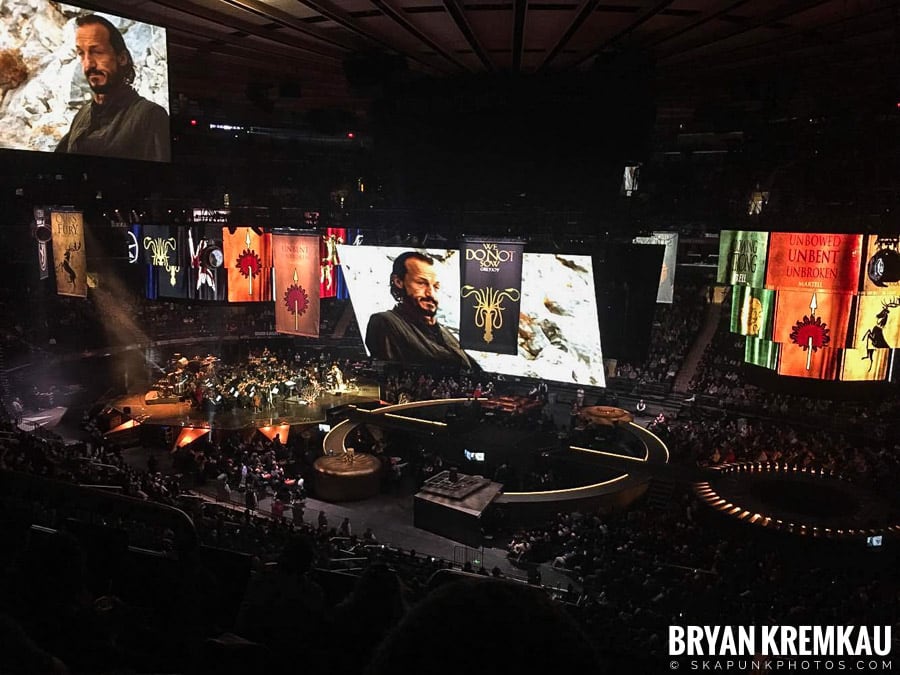 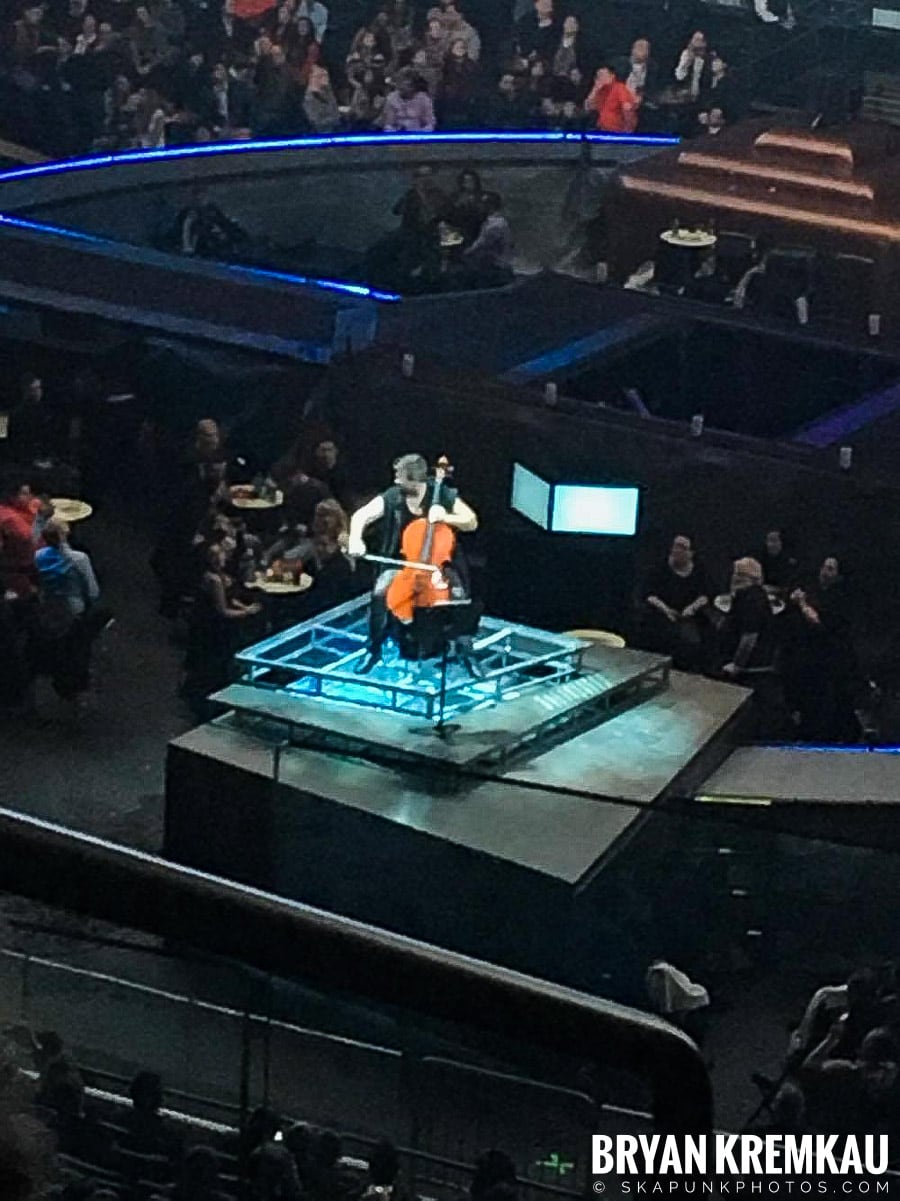 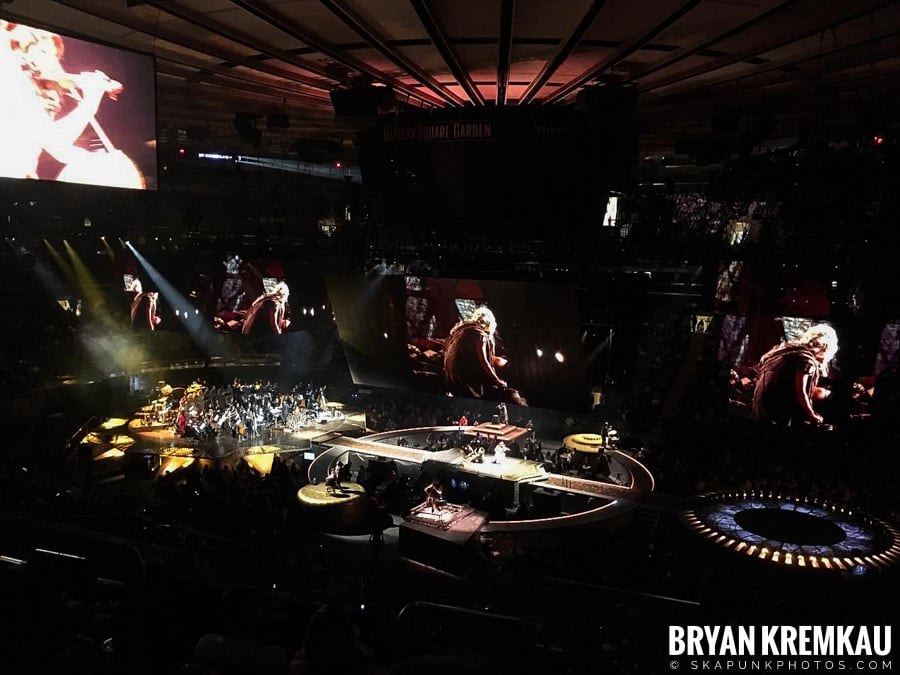 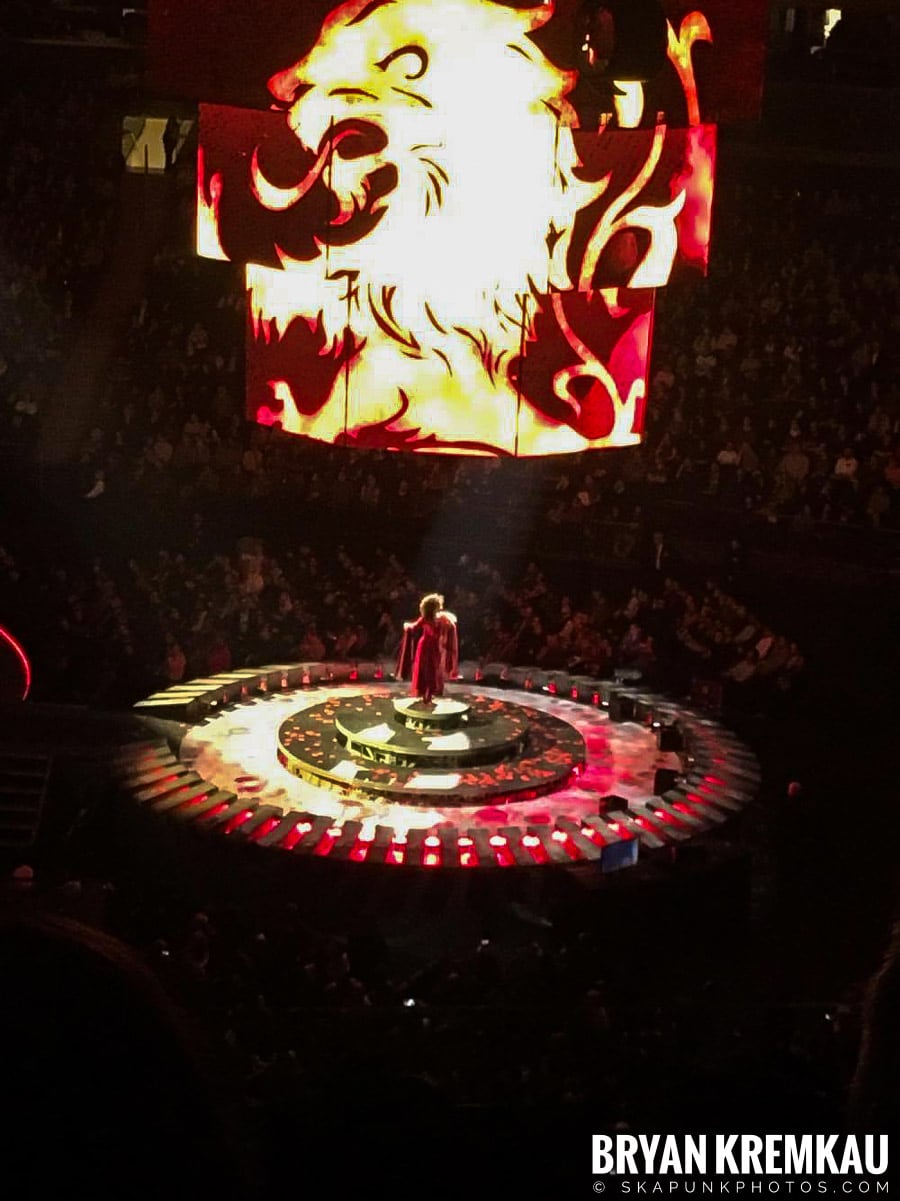 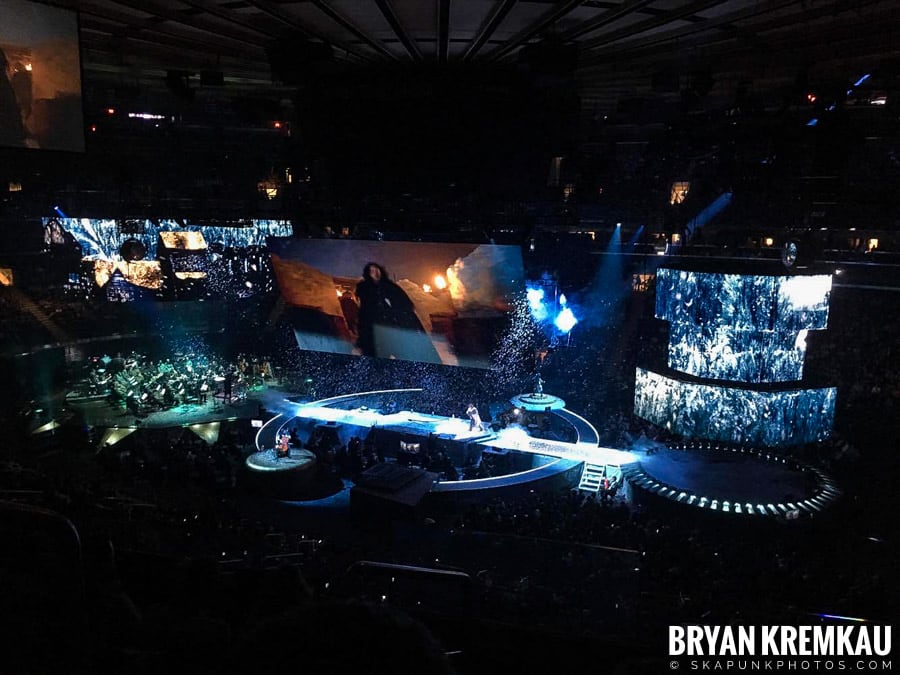 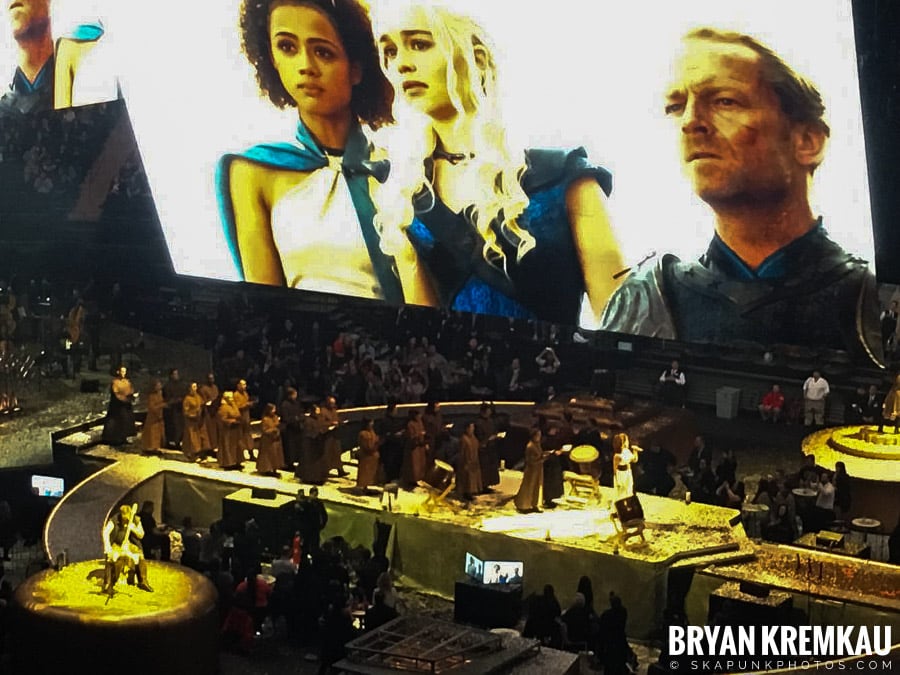 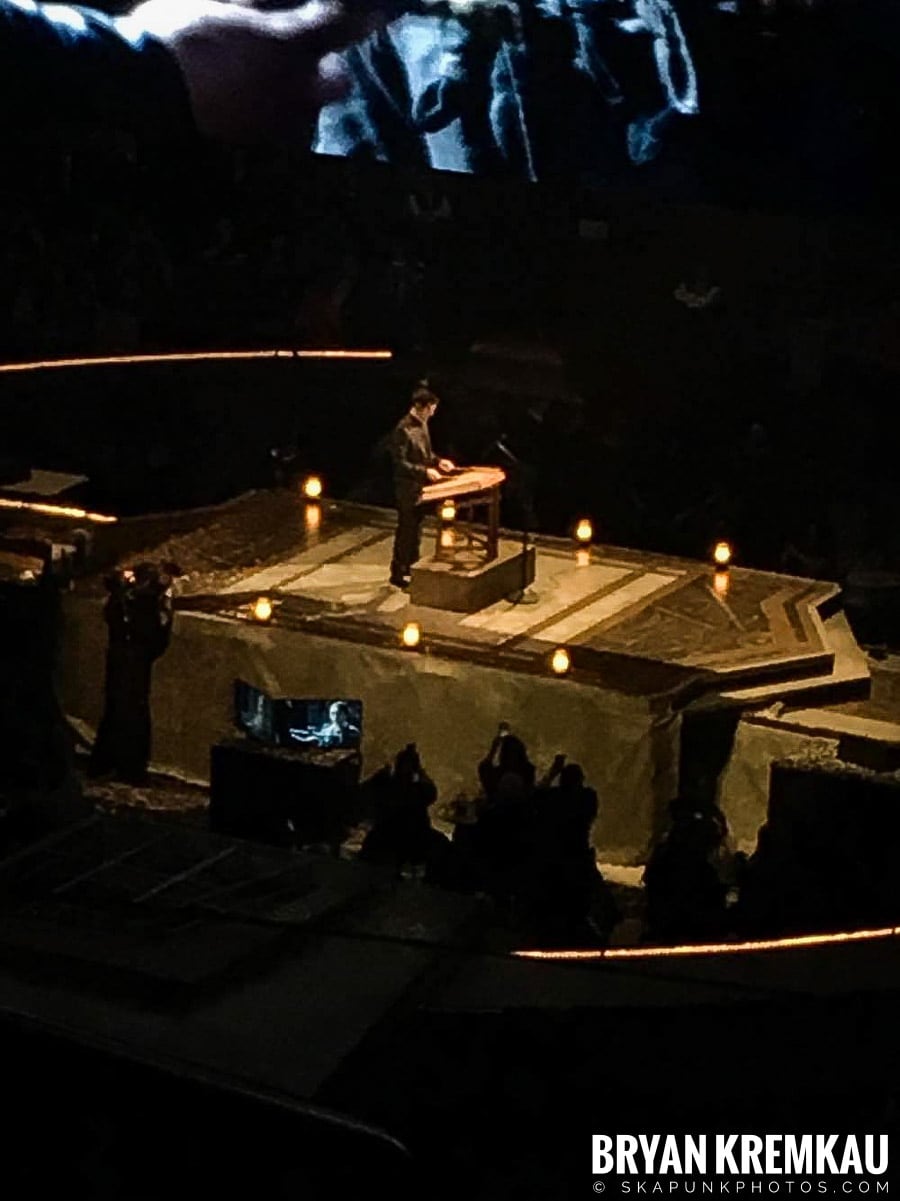 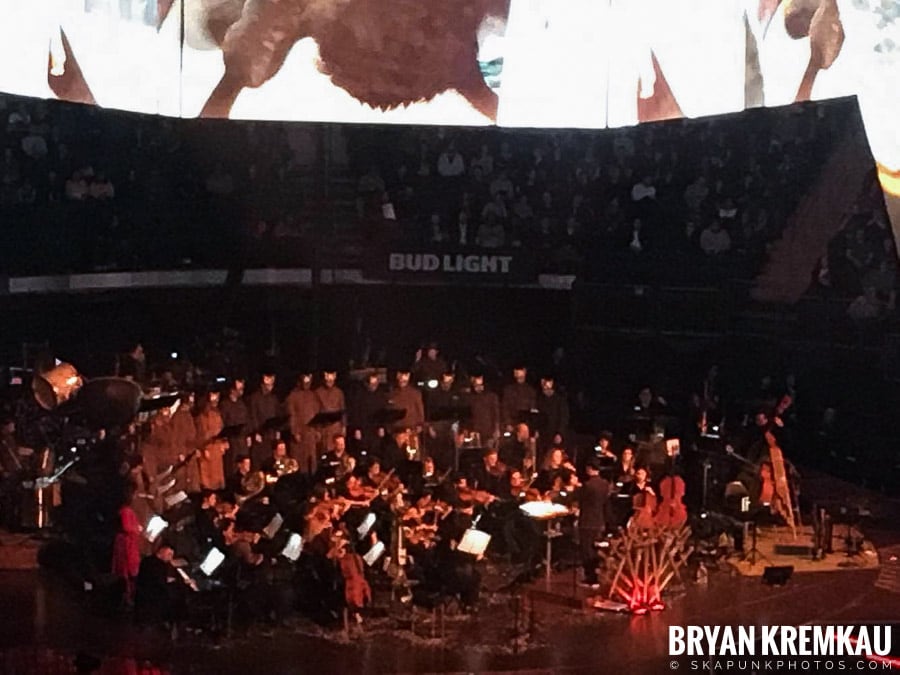 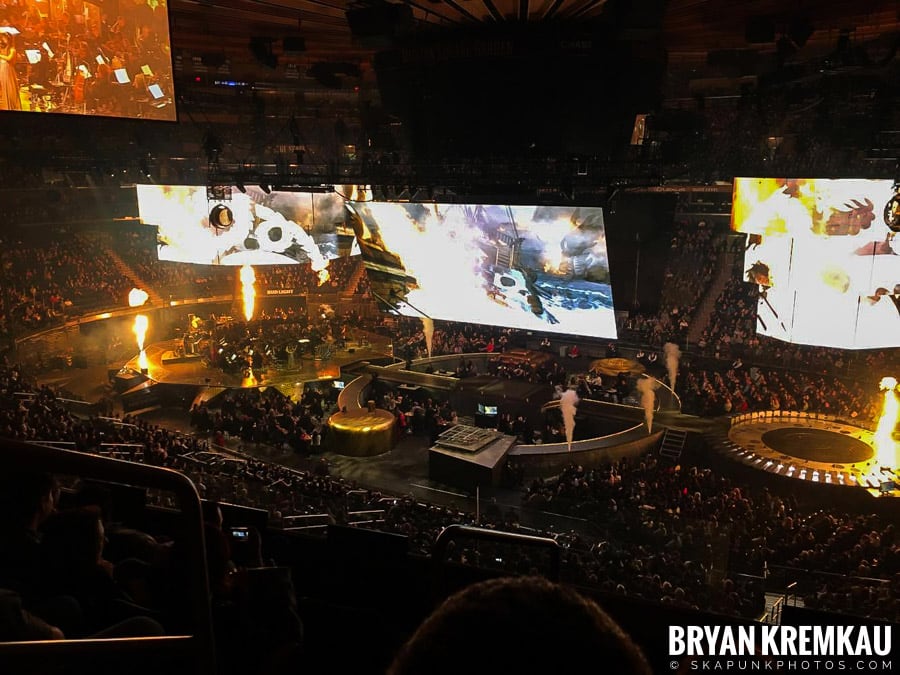 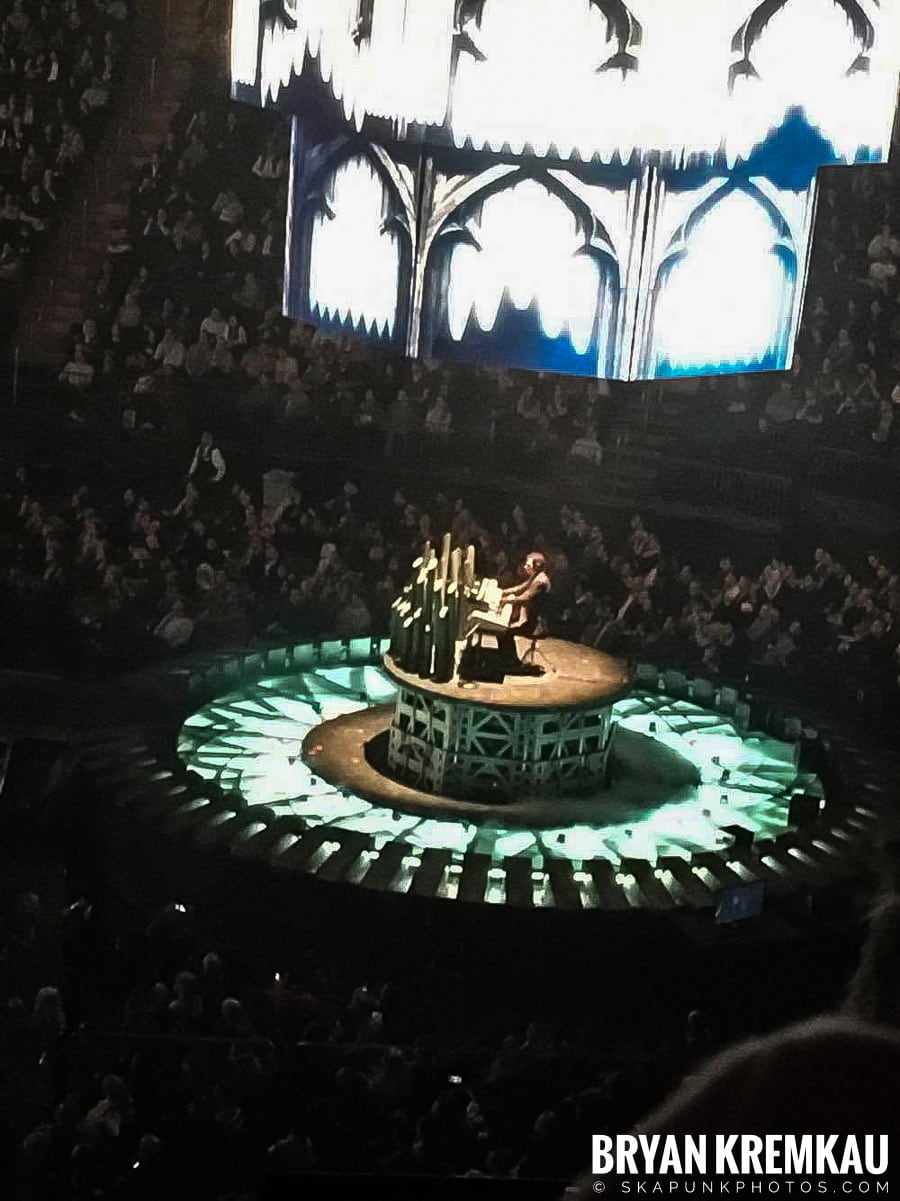 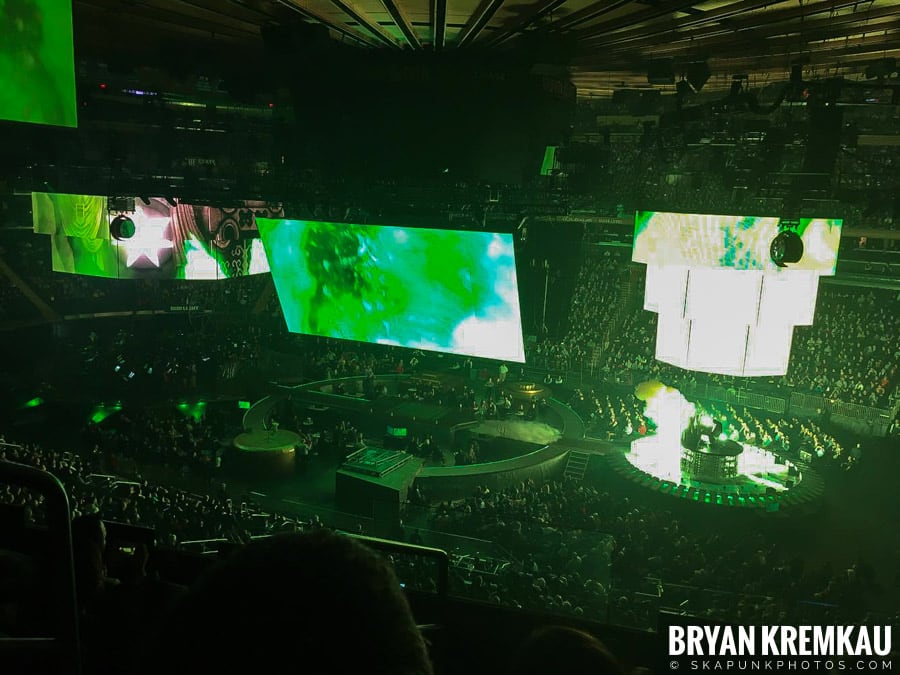 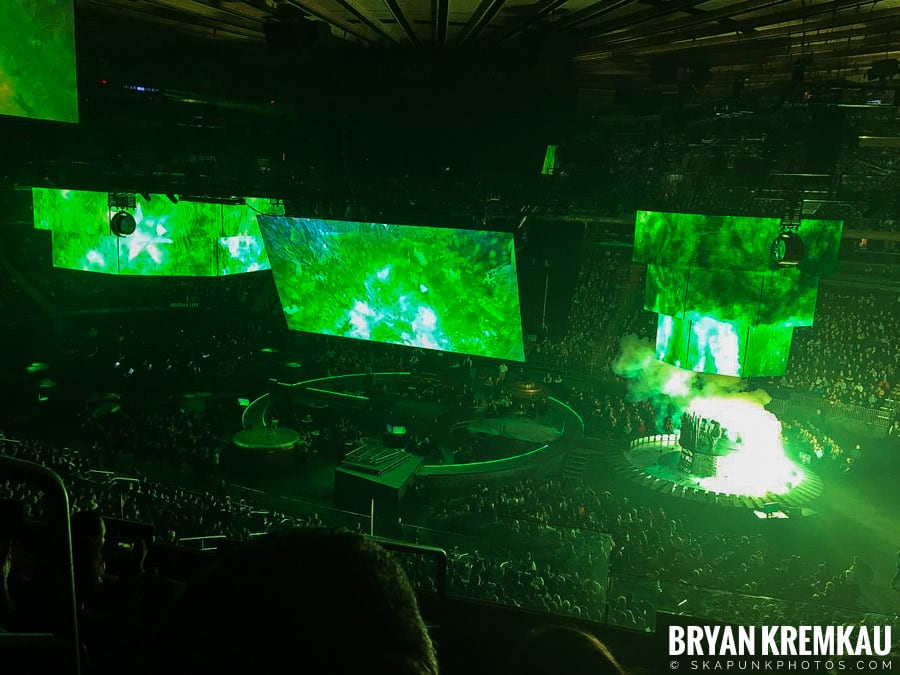 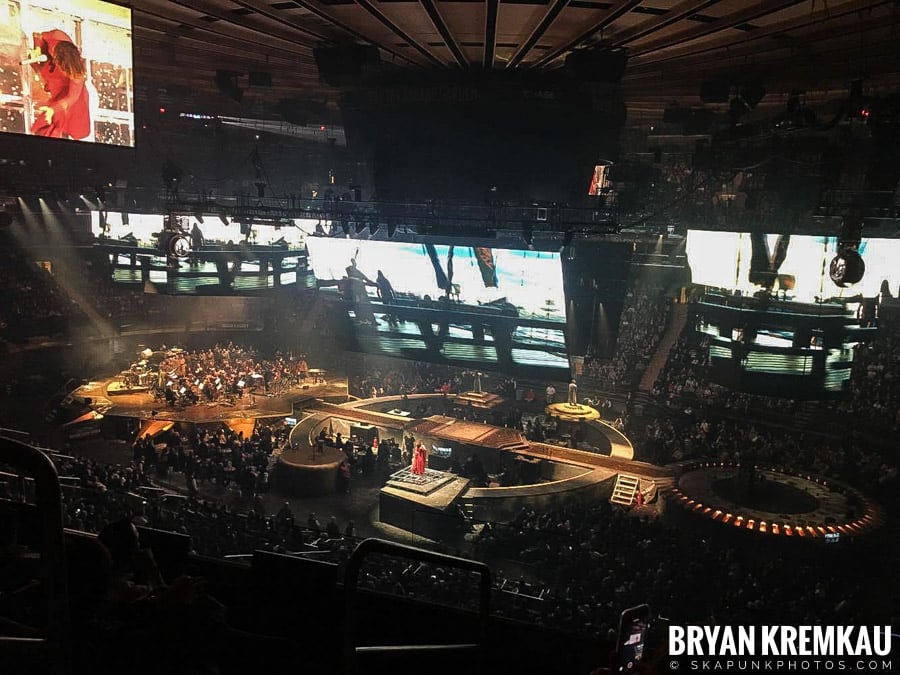