Gaslight Anthem have been making some noise since their debut album ‘Sink or Swim.’ Now they have been attracting even more fans with their hot new release ‘The 59 Sound’ off Side One Dummy. I became a fan of the band with their EP release of ‘Senor and the Queen’ and I hadn’t seen them live until this show. I’ve heard great things about their live show and they certainly didn’t disappoint. If you like their new album, you have to make an effort to go out and see these guys perform!

The opening band of the night was local Scranton punk band The Menzingers, who have an album off of Go Kart Records. I actually saw these guys in my neck of the woods in Circleville, NY at the Big Orange Bonanza. I liked their sound a lot and they sounded even better at Cafe Metropolis. Obviously the audience knew their stuff and went crazy for them. Besides Gaslight Anthem, I liked the Menzingers set the best. Their cover of Straight to Hell is great and even Brian of Gaslight Anthem said so on stage during their set. If you get a chance to see the Menzingers live, check them out.

The next two bands were Polar Bear Club and American Steel. Polar Bear Club hail from Rochester, NY and the singer reminded me of Andy on Sci-Fi’s Ghost Hunters International. Random reference, I know. PBC had a melodic hardcore/rock sound and I dug a few songs. American Steel was the band right before Gaslight Anthem and most of the crowd knew their music. I didn’t, even though I reviewed one of their Fat Wreck albums. I liked their faster songs but I eventually got bored with their set. I think I was just anticipating GA’s set a lot more and wanted to see the band come on already. They seem to go on longer than I wanted them to.

Gaslight Anthem finally came on and just blew me away with their set. I was screaming the words of Great Expectations as they opened with that. There’s just so many excellent songs off ‘the 59 Sound’ album that I was hoping they would play most of them and they did. They might have left off one or two songs from that album? I loved hearing Old White Lincoln, The 59 Sound, Miles Davis and The Cool and The Patient Ferris Wheel. For the most part, the band played many tracks from their new album but they also played songs from their debut album ‘Sink or Swim’ and their ‘Senor and the Queen’ EP. The one song I loved hearing was Blue Jeans And White T-Shirts, which was the song that got me hooked on the band. I was really impressed with Brian Fallon’s singing and his stage presence. He sounds exactly how he sounds on the band’s albums, and that’s a good thing in my mind. The rest of the band is great as well, and add the nice whoas and ohs in the background. After their hour set, they came back to play 3 or 4 more songs. They played Here’s Looking at You Kid, which sounded excellent live. Gaslight Anthem finished off with a few from their older albums.

Gaslight Anthem’s shows reminds me of Against Me’s show because the entire crowd is singing along to every word. Even if you don’t know all the words, people still sing along and it’s a fun time. At one point, someone stage dived and then knocked into one of the lights in the club. Brian told the crowd to not wreck this club because then places like this will close down. He has a point, but the ceiling is pretty low at Cafe Metropolis. For right now, the band seems like they will be just be fine playing smaller clubs like this. But I have a feeling they will get a lot bigger, which will result in them playing bigger clubs. I’m fine with that as long as they don’t change the sound they currently have because these guys are the best thing I’ve heard in a long ass time. 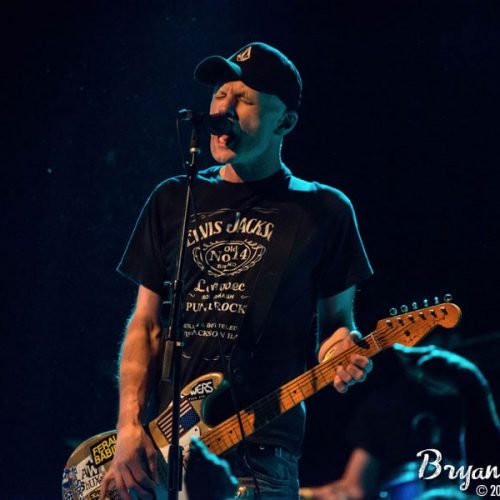