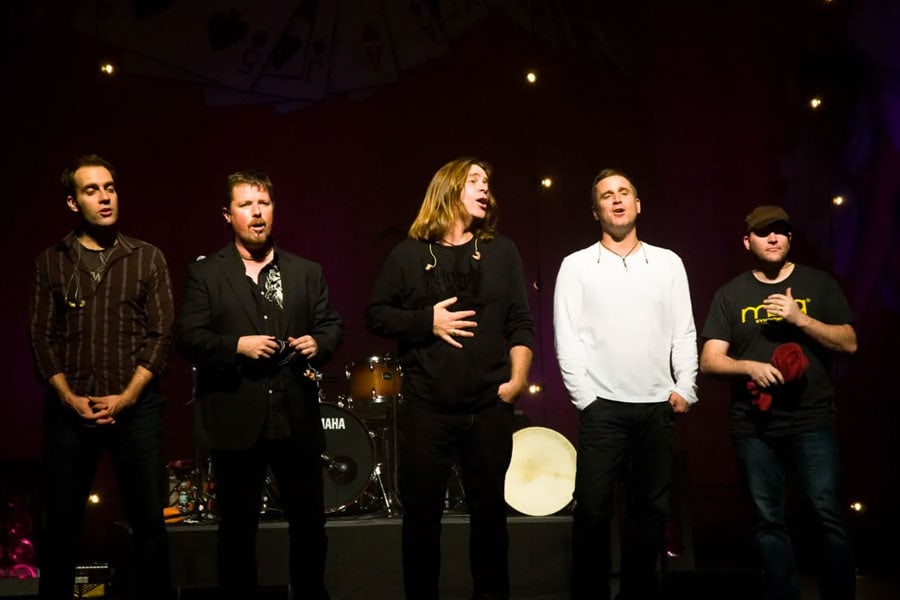 Great Big Sea made a stop in the small town of Tarrytown, NY last night. The night offered fantastic music, lots of hand clapping & dancing and jokes about hot dogs and Rocky Horror Picture Show. The sold out venue was bouncing to the music stopped, and the band were excellent as always.

The evening started off rocky for my girlfriend and I because we were stuck in traffic getting to the venue. First, the Monroe Woodbury Commons had tons of traffic, and then by the Tappan Zee Bridge. The bridge traffic was due to an accident, which resulted in sitting in the same spot for almost an hour. I heard on the radio there were 6 separate accidents on the Thruway in a small stretch of the highway. I was sweating bullets because I didn’t know if I was going to make it to the show on time. I didn’t know how parking was going to be since I never been to the Music Hall before. Luckily, the accident was cleared at the nick of time and we made it to the venue within 15 minutes of the show starting.

I was the only photographer (well besides the crowd) and it was nice to be the only one there. I stay to the sides since I didn’t want to get in the way of the audience, plus I wasn’t allowed to be in front of people. Towards the end I sat on my knees and shot the band from there. I never been to the Music Hall before but it’s still a venue in progress. People volunteer there to make the venue better, and restore it. It’s a decent size place and I think any seat in the house would be fine there. The lighting was terrific, thanks to the Great Big Sea crew. But enough of the techie junk, let’s talk about the actual show!

The band came out and opened with “Donkey Riding,” which they have been opening up with this tour. “Captain Kidd” and “Love Me Tonight” soon followed. Fortune’s Favour came out last year or so, so the band wasn’t out promoting anything. They were just playing the hits from all their albums. I suspect they needed to get back on the road since the band has been on hiatus since the spring. Alan Doyle has been filming the new Robin Hood movie with Ridley Scott and friend Russell Crowe. I can’t wait to see that movie by the way. That’s why Alan is looking like a cross between Russell Crowe and Valient Thorr. I actually think his beard looks great, I wish I could grow one like that. After I sat down in my seat (4th row), Sean sang “The Night Paddy Murphy Died.” I knew from that point on that I wouldn’t be sitting down that much. The crowd was really into it, clapping and dancing in their spots. The crowd was a lot better than last year’s crowd in South Orange, NJ.

The funny banter between the band members was hilarious as usual. Sean was talking about the Rocky Horror Picture show, how Tarrytown has 20 different types of hot dogs, the headless horseman and how sexy Murray is; Random stuff indeed. Other songs they played the first set include the Oysterband cover “When I’m Up (I Can’t Get Down),” “Jack Hinks,” “England,” “Boat Like Gideon Brown,” and “Here and Now.” At one point, Sean sang a new song called “Good People(?)” that they have been testing out. It was a folk, alt-country style song and I liked it. Who knows what the rest of the crowd thought but I thought it was a good song. It’s a tad different than what they have been doing lately. I’m really glad they played “Here and Now” again since that’s one of my favorite songs off the new album. Towards the end of the set, they played a series of covers ranging from I Fought The Law, 500 Miles, Phantom of the Opera, and Bohemian Rhapsody. The crowd was really into that and sang every line back to Alan; the group was quite impressed. They finished the first set off with the cover of “Run Runaway.”

They came back and continued to rock the house with an instrumental tune, and then went into the crowd favorite “Lukey.” The mixing of slow tunes and fast songs was nice, especially since my legs were killing me that night. But it wasn’t long before everyone was up standing and clapping along again. “When I am King,” “Scolding Wife” and one of my favorites “Penelope” were played after “Chemical Worker’s Song (Process Man).” I absolutely loved it when they started off the opening notes of Penelope, considering I haven’t heard it played live yet. This was my 3rd time seeing the band and they have yet to play that. Last show they played a lot of songs from Fortune’s Favour, which is fine by me. And even after the 3rd time, I’m just amazed at how fast Sean can sing “Mari-Mac.” He’s definitely the best person to sing that song from all the bands that have covered it. Finishing off the set was “Helmethead,” “Consequence Free” and “Ordinary Day.”

The loud cheering from the crowd made Great Big Sea come back to do an encore. Sean sang a song I wasn’t familiar with. Apparently it’s a folk song, made famous by Led Zeppelin song called “Gallows Pole.” “Excursions Around the Bay” was one of the sea shanties played in the encore. But the 3 song encore wasn’t the end of the set; the band came back for more. It was Saturday night, there was a sold out crowd cheering like crazy, and it was also the tail end of their tour; so Great Big Sea came back for some more songs. “Old Black Rum” was played last and finished the show off perfectly. Seeing Great Big Sea every year is too sporadic for me. I need them to play NY every 6 months at least. They put on one of the best shows around! Even if you don’t know their music, I guarantee you’ll have a great time at one of their shows.