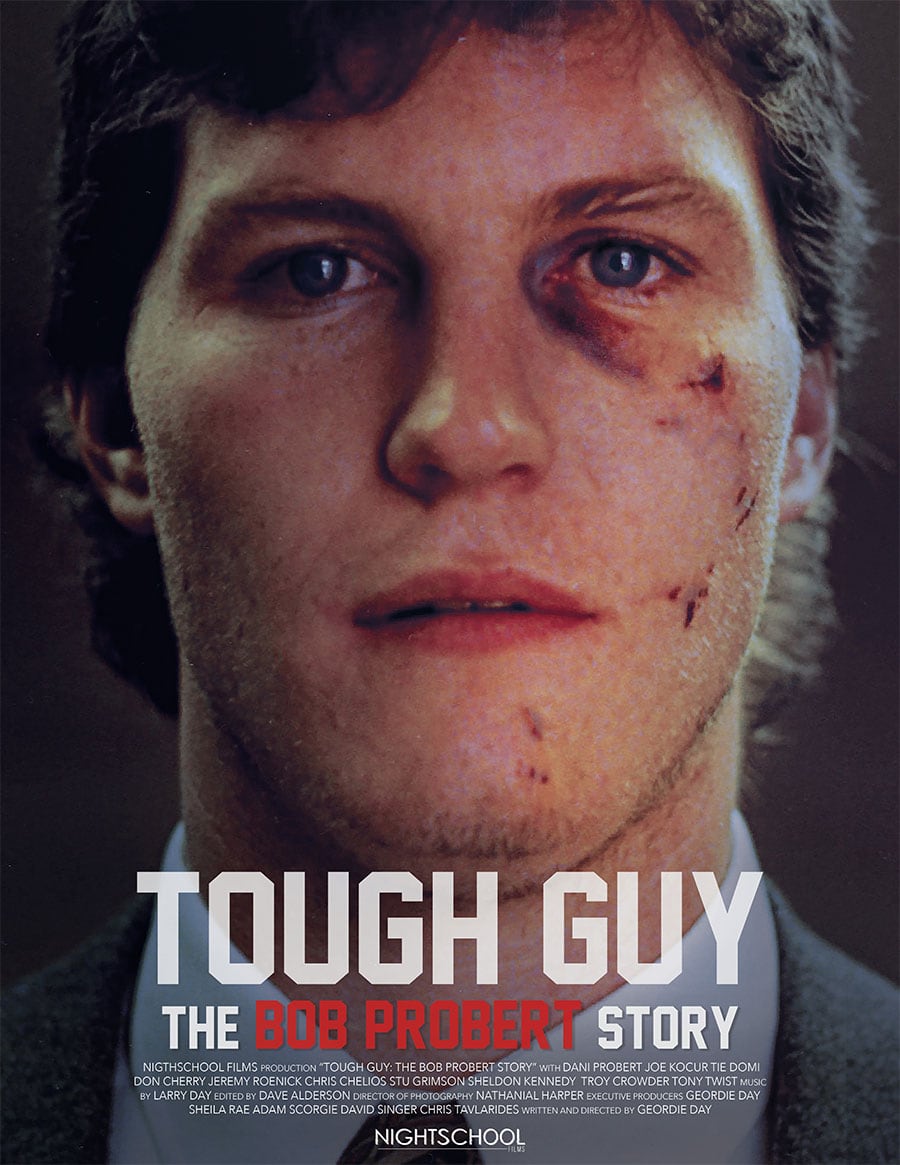 Tough Guy: Bob Probert Story is great documentary about one of the toughest hockey players of all-time. If you’re a hockey or sports fan, this is something to watch if you can because it shows his roller coaster of a career, and his post-hockey life as well. It’s hard to defend fighting in hockey after this that’s for sure.

Bob Probert was one of the fiercest, strongest hockey fighters ever. He was known for being a fighter and enforcer for Detroit Red Wings and then Chicago Blackhawks. Players were afraid to play against him because he was just out of control on the ice, and well off the ice as well. He would get into fights with other bruisers, but also would target goalies and other teams’ best players. He could also score goals as well, so he wasn’t always just a fighter. Since joining the Red Wings, he had issues with cocaine and drinking, like most players did. But Probert took it to the max, and had to go into rehab a few times. To say his life and hockey career was a roller coaster is an understatement.

The movie opens with the classic Probert vs Domi fights which happened over a few games for the Rangers. I remember those games vividly because I was watching Rangers games back then. I used to watch Probert fighting all the time because he was praised and highlighted by Don Cherry and his Rock Em Sock VHS compilation tapes. My brother also watched the Red Wings as well as the Rangers since I knew about Probert on the ice. I knew he had some issues later on but back then, I didn’t really follow that stuff. Didn’t know he was in and out of rehab, getting stopped at the border and all that stuff. I’ve been a hardcore hockey fan but forgot when Bob retired or when he was forced to retire. His later career, the players were getting bigger and stronger so it was harder for him to keep up. He was shooting up steroids to get stronger but just got heavier and slower. Sadly, he passed away in 2010 after taking Oxycontin from so much back pain and died on vacation with his family.

The movie shows a side of Probert I never knew. I knew he was probably a family man, but didn’t know he had 4 children. His wife was very much taking care of them as he wasn’t always there and out partying. The documentary uses lots of archived footage, home videos and audio of Bob Probert re-telling things, which makes it more effective than someone telling stories about him. Better to have the words coming right from his own mouth. There were interviews with former players & coaches like Joey Kocur, Tie Domi, Troy Crowder, Chris Chelios, Jeremy Roenick, Colin Campbell and others. It was interesting to hear from Tie because he’s had plenty of fights and knows his head probably isn’t well. He knows what’s probably wrong but afraid to find out, but at least he’s aware of it. Most of these fighters don’t know until it’s too late. For the most part, the interviews and recounting of stories came from Probert’s wife Dani and his mom, who wrote a book about him as well. They wanted to get this story out about him and think they have done a good job at that. When Dani and their daughters were recounting the story of when Bob died, man, that was tough to watch.

Tough Guy: The Bob Probert Story will be airing on Super Channel in Canada December 14th with a U.S release expected next year. It’s a must-see documentary for hockey fans, especially ones that knew of Bob Probert. Behind the big, scary guy on the ice, was a man with many skeletons in his closet but he was also a family man. This doc shows the human side of him, and I wish he had a chance to clean up & get things in order before it was too late on his body. Definitely check this one out though.

Bottom Line: Rough to watch at the end but an excellent documentary about one of the toughest players to ever play hockey.
Running Time: 94 mins
Rating: NR
Overall Rating: