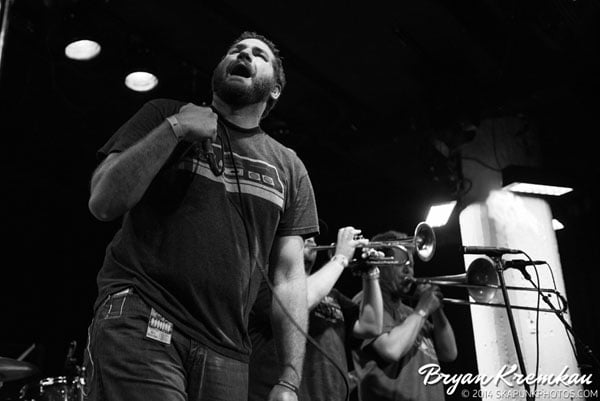 Mrs. Skannotto is a ska band out of Rochester, New York who has been together for 15 years. 2012 was a huge year for the band and 2013 has seen them gaining even more steam as major players in the US Ska Scene. I had the chance to ask the band a few questions and got some really great insights into the band and their philosophy. Enjoy!

This latest tour has had you on the road for almost 2 months. Is this your longest tour?
Yes, to date, that was our longest and busiest tour, 42 shows in 43 days. We did a US tour this past fall with Less Than Jake, but it only lasted about 3 weeks total. Aside from that, we had been doing mainly long weekends and short runs in and around the Eastern region.

What city has been the biggest surprise in terms of reception to your band? In terms of a ska scene?
Albuquerque NM at The Launchpad was probably the craziest crowd we met this last tour. The place was packed, the opening bands really got the crowd pumped, and when we hit the stage the room seemed to explode. We had a blast there and can’t wait to go back. In terms of a ska scene in general, we were really surprised by such a strong turnout in Lafayette, LA. What an awesome show!

Other than a number of legacy bands (Reel Big Fish, Toasters, Less Than Jake), you are one of the few new ska bands to actually tour. How is that in 2013?
It has been really great actually! It helps that we’ve been touring with those “legacy bands” you mention, establishing connections with fans of some the same bands who’ve influenced us over the years. It’s funny; some people seem genuinely surprised that there are still up-and-coming bands in the genre that are trying to make a legitimate run at making it a career. Many people seem to think they have “outgrown” their love of ska from when they were younger. They come out to see a big band from the “good old days” and are really surprised by our newer take on the ska genre. The response across the board has been awesome!

In reading certain press materials, there were a lot of statements made about progressing your sound. Sometimes bands make these statements and there isn’t much progression. Your material completely backs up any claims that you made. What inspired this latest evolution as a band?
We had to deal with some serious lineup changes a couple of years ago, with some people making the choice to leave the band and focus on family. Before we started writing “All These Evolutions,” our latest LP, the remaining core members used the opportunity to create a new lineup to build a group that could propel us forward. Much of the progression in sound comes from new players and new writers bringing their influences and sensibilities to the music.

How do you get the entire band on the same page in order to move into this direction? It is a very grown-up sound.
Thanks! It actually took very little effort to be on the same page, as we literally locked ourselves in a rehearsal room every day for months. We’re all very open and engaged with one another when we write, but our goal is not to force a sound or direction. Our goal is just to create music that is interesting or moving to us.

With such specific sounds, how do you retain the main idea of being a ska band but move everything forward? Who are you drawing influences from whether it’s musically or directionally?
The 6 of us come from different musical backgrounds and draw our influences from very different places, so it’s tough to name names. We don’t try and force ska into our music or force other genres into our ska, it all just comes naturally from who we are and where we come from. Much of what we’re doing is driven by our love of ska, punk and reggae, but we also have guys who grew up on 90’s rock, metal, hardcore, funk, jazz, alternative…All of that comes out in the way we approach ska music.

Your sounds have been described as ‘an architect of the 4th Wave.’ Do you think that ska needs to evolve in order to survive?
Like any musical genre, ska needs to evolve to some extent. As new people become interested in the music and new artists begin to make the music, everyone will put their individual spins on it. Music itself cannot be a static animal; it thrives on change and is fueled by new ideas. It’s important for some bands to be pushing the limits to capture and excite new and growing audiences. Just as important as the genre evolving, it’s important for new fans to find the pillars of the ska world and at least understand them, if not become a fan of them. Recognizing and understanding ska’s long and storied history provides the best foothold for launching a new effort that pushes boundaries. Perhaps that is what will come to define the “4th Wave”, bands, old and new, reaching beyond perceived boundaries and smashing things together!

You just released a record called ‘All These Evolutions.’ Is the title of the record directly related to what the band was doing next?
Pretty much, yeah! We spent a long time thinking of a title for this album and someone commented that this band had been through so many changes, it was like an evolving animal. It just happens that the line occurs in the chorus of “Just As Well.” PERFECT we all thought! Mrs. Skannotto really does evolve both with the influx of new ideas and influences from members new and old, as well as in a maturing process that has occurred over our 15 year history as a band.

What is next for the band after this tour?
After this last tour, which ended March 1st, we took a short 2 week vacation. We are all really excited now to have begun work on another new album! Our writing process involves all of us together in our rehearsal room, writing and working on ideas together, so we’re not sure how long that will take. While doing that, we hope to be out touring again on a limited basis this spring and maybe something bigger for June and July. Hopefully, the fall will bring more recording and more touring!

Do you have a next specific goal you’d like to achieve in 2013?
We’d really like to cement our status as a national touring band and achieve a level of success that can sustain the band as a career for all of us.

Any final words?
Just to get out and support your local music scene, not only ska, as much as possible. Its successful local shows that allow promoters and clubs to take chances on bringing in out of town acts (like us!) because there is a culture of successful live shows in an area. You don’t have to love the ska-punk band from around the corner, but supporting the scene in general will help everyone…every single person can make a difference!

Be sure to check out the band at www.mrsska.com