Actress Nicole Steinwedell starred in the 4th and final season of the excellent TV Series The Unit, which aired on CBS. She played an interesting character called Bridget Sullivan (“Red Cap”), that brought new elements to the show that we didn’t see before. With the final season of the Unit being released on DVD/Blu-Ray this week, along with the awesome Complete Series Gift Set, ReadJunk.com had a chance to send some questions to Nicole. Read her answers below:

How did you get your start with The Unit? Was it considered a guest spot at first or were you considered a recurring character from the beginning?
My character was originally written as a 3-6 episode arc. I was then contracted into the show- it was so exciting- and flattering!

Having parents in the Military, did that influence or intrigue you to do The Unit?
Absolutely. Not only did I feel like I had a sense of the kind of people that the show portrays, but I also felt I understood the complexities of a female in uniform. My mom and I had some great conversations about power and femininity- I call her my unofficial tech-adviser. My grandfather, a retired Army colonel, was also a huge fan of The Unit before I was even cast- so it was a great honor to be a part of a show he had respect for.

Did you have to go to a “Hollywood” boot camp for the role?
I did! I was taken to the shooting range and given thorough lessons in gun handling- because the very first episode I was in required me to be ambidextrous with my gun skills! Also, I spent time running in the sand with our tech advisers (a former Delta force member and an FBI agent), talking-while running- about the background that someone like Bridget would have in order to deserve her status in the Unit.

4. As the only female member of The Unit, was it hard to fit it with the boys?
The character’s experience somewhat mirrors my own. Bridget receives a fair amount of skepticism at first from the boys, because she’s new and she’s young- and a girl- how could she possibly know what she’s talking about?!
But just like her, I think I proved my worth over time- I hope so anyway! And they were glad to have someone to tease, and I’m glad I had seasoned pros to show me the ropes.

5. Are you anything like your Unit character “Red Cap” in real life?
Uh, yes. I’m tenacious, ambitious, and a fighter. I think Bridget is a bit more comfortable using her sexuality as a weapon…I’m working on it.

6. What roles normally interest you? Do you prefer drama, comedy, etc.?
It’s hard to follow a role like Bridget- she had so much going on, so many adventures in store… I hope more characters as complex as hers continue to come my way. No preference for drama or comedy- just great writing and inspired direction. The roles that interest me- not surprisingly- are those of women warriors, whether they’re leading a nation or trying to put food in their babies’ mouths. Well, I suppose that does sounds pretty dramatic ;) But I also have always loved off-beat comedy- Arrested Development, Curb Your Enthusiasm, etc.. So we’ll see what the future holds!

7. Like the rest of the Unit fan base, I was angry when the Unit was canceled. How did the cast & crew take the news?
In stride! So sad to see it end and there were tears on the final day of shooting, but I know everyone felt grateful for the time we had. We knew that the show was something special and relished working on it. We truly did have the BEST cast and crew in town!

8. What do you think were the main reason(s) why the Unit wasn’t renewed? The schedule, cost of production/actors, etc.?
I can only tell you what I think, not what I know because, of course, these decisions are complex and made by business minds far far away. So we are left wondering and I’ve decided to think this: It was money and timing. In the current economy both of Hollywood and the larger global economy, maintaining a show of this magnitude is tough. I could go on and on about my thoughts on this one but it’s a bit out of my purview.

9. Is there still a chance that there will be a Season 5 or some sort of movie? Do you know if any other networks were (are) interested in the series?
I don’t know! I’ve heard rumors but nothing confirmed. Wouldn’t that be wonderful! 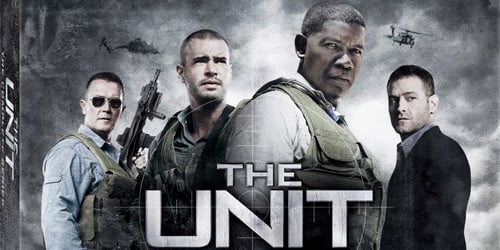 10. The Unit Gift Set DVD and the 4th Season DVD/Blu-Ray were just released. What can fans expect on those releases?
DVD commentary, deleted scenes, behind-the-scenes featurettes and more! It going to be the mother of all missions :)

11. Before becoming an actress, what type of jobs did you have?
I’ve been a private tutor, a bartender, a waitress, a librarian, a trainer, a student (that’s a job, it’s just expensive)… you name it, I’ve done it!

12. What was the last movie you saw and what did you think?
Last movie I saw: Paper heart. I’m still confused- was it real? Was it staged? Did they really fall in love? My favorite part was that she used coffee bean vanilla powder to make her blended.

13. Since ReadJunk.com is also a music website, what are some albums that you’ve been listening a lot lately?
Muse- The Resistance!! Freakin amazing…these guys have a lovely flair for the dramatic… There are moments, and I don’t even think this is sacrilegious, that they sound like Queen- ah!- then back to rock! “They cannot control us! We. Will. Be. Victorious!”

14. Any future projects in the works? Perhaps Shawn Ryan has a spot for you on an episode of Lie to Me?
I’d work for Shawn Ryan any day of the week and twice on Sunday. I’m not going to pressure him though; he was so generous to me this year- what a great part I got to play!  I am in the upcoming, A SINGLE MAN, Tom Ford’s directorial debut. And as always, I’m auditioning- hoping that next juicy part is right around the corner.

Thanks a lot Nicole, and thanks for taking the time to answer our questions!