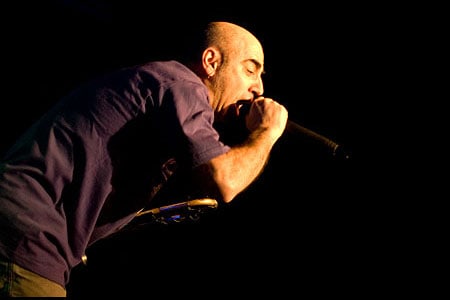 What’s your name and what do you do in the band?
I’m Vinny, I play trombone and sing a little bit

How did you come about being in Pilfers? How did the band come together?
The band formed in in 96′ after me and Coolie had collaborated on a demo of his songs. The ideas just kept growing and we knew we were on to something. We started playing out all over the country. The next thing we know we’re this underground national touring band.

Many know that you were once in Bim Skala Bim, a great ska band from Boston.  What made you want to leave?  *sorry to beat this issue into the ground*
It had been 10 years and I needed a change. It was the hardest decision I’ve ever made, I’m real close to those guys we went through a lot together and i’m grateful to have had that experience. They taught me about survival out in the real world of music..I also wanted to move to NY to do other types of music ie; jazz and underscoring for commercials. My other band which has been together since college (Les Miserables) is mostly in NY.

How did the other members of Pilfers come involved with the band?
we hooked up Anna and James from Skinnerbox and Nick from an ad in the Village Voice.

What is your goal as a band?  Do you think money is the most important goal of a band?
Our goal is to bring ska and reggae related music to a new level. Make it different in every aspect. It would be great if we could get rock critics to give this music(ska) the respect it deserves. I think these critics are bothered by the movement But really who the fuck cares. Ska is not going away. I’ve been playing this music for 12 years now. Money is not the only goal in a band but you gotta pay bills just like any business. The more money comes in the bigger the bills. We dropped four grand on the van alone this year. And so forth and so on. Anyone who has their own business wants it to grow and become bigger we’re no different. But we keep it all in perspective and will never compromise our music for the sake of money. We’ll never give up our first cd to the corporate gods.or demons.

As many know now, the band has signed to MOJO…  How are they different from doing the album on your own, like your first release?
mojo is a great label. they are interested in developing their artists slowly and not just cranking out flash in the pan bands.we recorded our new release at the legendary electric lady studio.our producer john avila(oingo boingo) is great.he’s hard working and very patient he gets the best out of us ,so its been the most comfortable recording i’ve ever done.our first cd was done on a shoe string buget and it was stressfull keeping it all together.

Will we see lots of promotion with the new album? such as radio, videos, summer tours?
i think so.we’ll be on tour forever and hopefully it will all work out.

Speaking of tours, you toured with many great, national bands.. Did this open the eyes to a lot of the people onto the band?
all the tours we’ve done have been great exposure and we owe a lot to reel big fish,pietasters,bad brains and the specials.neville staples fought to get us on the tour after coolie sent him the cd. RBF and pietasters iIve known since my bim days.all bands in the scene are very supportive of each other. and the people who had had an open mind to listen to us and get our cd.thank you all!!

What are your favorite venues to play? states? best shows?
there are too many at this point to name and if i leave one out i don’t want to get in trouble

Favorite bands to play with?
spring heeled jack, the smooths,just about all  of them…….

Does the Pilfers want to be labeled as a SKA band?no if not? what  would you call the style of the band?
music you can dance and sing to.elevation!!!!!!!!!!

What does the band do while on tour for fun? any sight seeing?
touring is pretty rough sometimes but we’ve seen dinosaur tracks,mount rushmore,the arch in st louis

Bim Skala Bim Touring This Summer in MA, ME and NY