Prison Break ended the other day on a somewhat happy note (sort of). The Season 4 DVD of Prison Break will be out June 2nd, but the creators of the show have another trick up their sleeves. We’ll get to see even more of Prison Break..for at least another 2 hours with “Final Break.” The 2 hour episode/movie will feature all the stuff that happens between the events of Season 4 to the end of the series where it ends 4 years in the future. I guess we’ll know how everything turns out. Honestly, if there is one more twist in there; I’m gonna puke.


The artwork for the release is looking like this: 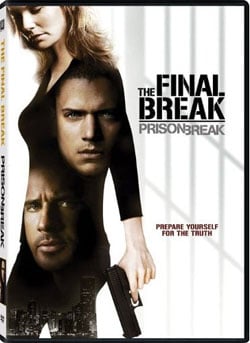 CENTURY CITY, Calif. – Just when it seemed the cult favorite series was locked up for good, the unstoppable action is back as PRISON BREAK: THE FINAL BREAK escapes one last time exclusively on Blu-ray Disc (BD) and DVD July 21 from Twentieth Century Fox Home Entertainment. In the biggest “Prison Break” event ever, the all new, never-before-seen heart-pounding feature-length story picks up some time after the series finale with Michael Scofield (Golden Globe® nominee* Wentworth Miller: The Human Stain, Underworld) and Sara Tancredi (Sarah Wayne Callies: “Tarzan”) fighting for a normal life together. However, happily ever might not be in the cards for Scofield, as he is once again faced with someone he loves in prison. With the authorities watching him closely, how is he supposed to break someone out when they know how he plans to do it? Prepare yourself for the truth as PRISON BREAK: THE FINAL BREAK reveals startling secrets that result in a shocking conclusion.

*2006: Best Performance by an Actor in a TV Series Drama, “Prison Break”

Synopsis:
The federal government can’t touch Michael Scofield, so they’re going after the woman he loves. When Sara is arrested for murder, only Michael can rescue her — and their unborn child — from an impenetrable women’s prison. With a price on Sara’s head and time running out, Michael must rely on his deadliest enemies to help attempt the most daring breakout ever. Combining white-knuckle intensity with jaw-dropping action and suspense, this is Prison Break like it’s never been seen before. Don’t miss a chance to make The Final Break!