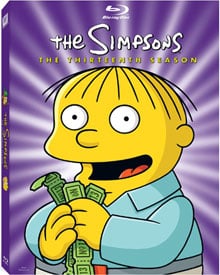 The 13th Season of Simpsons has been announced for DVD and Blu-Ray release by 20th Century Fox. It will come out August 24th. I think I saw most of these episodes and I believe there might be a few worthwhile episodes in here. But this really has to be the tail end of the series when it was good. Though that might have been a few seasons earlier on. Anywho, I’d still watch this and see how the episode has held up.

Twentieth Century Fox Home Entertainment presents the latest adventures of Ralph Wiggum and all of Springfield’s finest when “The Simpsons” The Complete Thirteenth Season arrives on Blu-ray and DVD August 24. In addition and for the first time ever, fans will be able to purchase the molded head DVD more than a month early at the Fox Booth #4313 at San Diego Comic-Con International between July 22 and July 25. As an added bonus, they will also receive a collectible limited edition lithograph as a gift-with-purchase.

The longest running comedy, animated series and prime-time entertainment in television history, “The Simpsons” has taken home the Emmy® for Outstanding Animated Program 10 times during its remarkable run. The hilarious thirteenth season features 22 episodes including two noteworthy standouts: the Simpsons’ trip to Brazil in “Blame It On Lisa” and Homer’s foray into medicinal marijuana in “Weekend at Burnsie’s.” Once again, a talented line-up of guest stars lend their voices including Ben Stiller, Reese Witherspoon, Richard Gere, Pierce Brosnan, Matthew Perry, R.E.M. and the legendary Paul Newman.

“The Simpsons” immediately struck a chord with viewers across the country as it poked fun of itself and everything in its wake. With its subversive humor and delightful wit, the series has made an indelible imprint on American pop culture, and the family members have become television icons.

“The Simpsons” The Complete Thirteenth Season is packed with special features including deleted scenes, audio commentaries on every episode, featurettes, storyboards, animatics, easter eggs and much more. The Blu-ray release also includes specially created menus with additional animation that does not appear on the DVD. The set comes in collectible packaging modeled after Springfield’s “special” child, Ralph Wiggum. The Blu-ray and DVD will be available for the suggested retail price of $59.99 U.S./$89.99 Canada and $49.98 U.S./$69.98 Canada respectively. Prebook is July 28.

* Special Featurettes:
– A Token from Matt Groening
– Ralphisms
– The People Ball
– The 13th Crewman
– Blame It On The Monkeys
– The Games
– The Sweet Life of Ralph

Pre-order the DVD here or the Blu-Ray here.