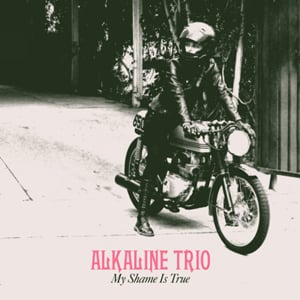 “My Shame Is True” is the eighth studio album from the Chicago area punk vets. It’s also one of their best albums since 2003s “Good Mourning”.

Over the past ten years Alkaline Trio have flipped and floundered back and forth between playing punk rock songs and Cure-influenced rock songs. A few years ago with the release of “This Addiction” the band said that they had planned on returning to their punk rock roots and while that may have sounded like the case, it took a few more years for it to actually sound that way.

Right from the beginning of “My Shame Is True” the melodramatic sorrowful punk sound that drew me into Alkaline Trio in the first place was prevalent immediately. “She Lied to the FBI” is a classic Alkaline Trio song that is full of melody, ripping guitar riffs and solid drumming. The pace doesn’t slow down from there either. You don’t sonically stumble upon a slow song until the last two tracks on the album. Before that though, is one of my favorite songs on “My Shame Is True” titled “Midnight Blue”. It’s a furious punk song with some great change ups and a great repeating guitar riff. It reminds me a lot of their Asian Man stuff. Speaking of Asian Man era, former Slapstick band mate Brendan Kelly even makes an appearance with some guest vocals on “I Wanna Be A Warhol”.

“My Shame Is True” is far and away my favorite Trio album in a very long time. Although I do enjoy a few of their recent albums I had been anxiously awaiting a true return to form for the band. You most definitely get a classic sounding album with this one and one that lead singer Matt Skiba says was more personal than it was intended to be. When there is meaning behind the songs, they always sound better.