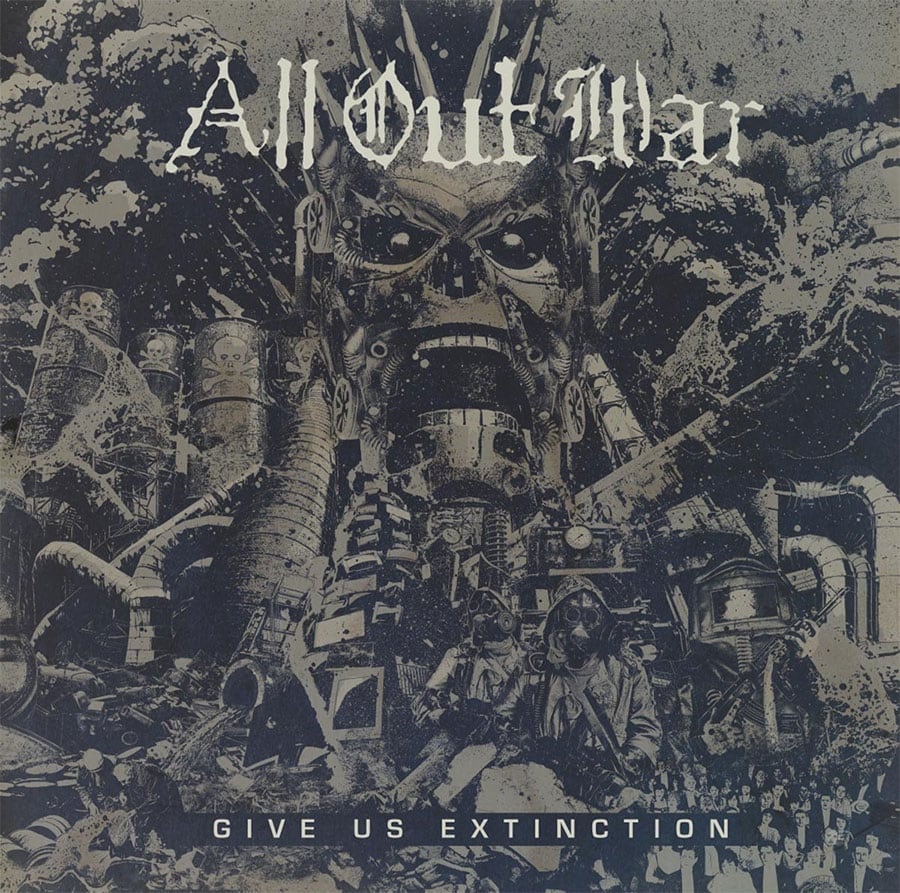 Following up on 2015’s return Dying Gods EP, Newburgh NY’s All Out War with their 6th full length album called Give Us Extinction. All Out War was always the local legend when I was growing up, I’d always hear these stories of this band featuring so and so’s cousin that would rehearse right on the outskirts of the New Windsor/Newburgh line.


After putting out some 7 inches locally, they released their first full length Truth In The Age Of Lies, a ground breaking effort that would eventually get them signed to Victory Records to release their classic album For Those Who Were Crucified. A ton of lineup shifts and what seemed to be a rotating trade with Hatebreed for drummers each week eventually put out 2003’s Condemned to Suffer before disbanding, and getting back together to release 2 other records in 2007 and 2010 for Victory. After several reunion shows for various east coast festivals the band put out a return to form EP in Dying Gods for Organized Crime Records and this follow up is very much in the vein of that style.

The EP resulted in a return to the roots, something that had been lost on the later Victory albums, which coincidentally don’t see too much representation in setlists nowadays. The approach was a very natural raw sound, which is great considering most metal bands cut and paste riffs and drag and drop drums. Steve Evetts and Alan Douches are back at the helm for this keeping the recording/mixing/mastering local at West West Side studios in New Windsor NY. The material itself comes off as more of a logical follow up to For Those Who Were Crucified almost taking lyrical cues from influences like Carnivore with songs like “Carcass Rot”, “Give Us Extinction” and of course the knock out punch of “Burn These Enemies.”

“Worship The Cancer” continues on with the relentless unforgiving pace, while “From The Mouths Of Serpents” and “In Praise Of Leeches” sound like something that could fit in great with the early stuff. “Choking on Indifference’ kicks off with a more hardcore style while “Carcass Rot” gives you a brief moment to breathe before “Circling Vultures” thrashes in with it’s fast pace. The beatings continue with the tom heavy “Ingesting Vile” while “Bodies for the Machine” has a cool mid section riff. The album finishes out with a Nausea cover “Cybergod” before coming back one more time with a flurry of windmill punches in the closer “Repulsive Premonitions”.

Bottom Line: This is the best album the band has put out in a long time, and a great place to pick up on them if for some reason you’ve lost track of them. This one’s sure to get some people out of pit retirement.
Notable Tracks: Burn These Enemies, Choking on Indifference, Circling Vultures
Overall Rating:

album review, All Out War, Give Us Extinction, hardcore, metal, Organized Crime Records