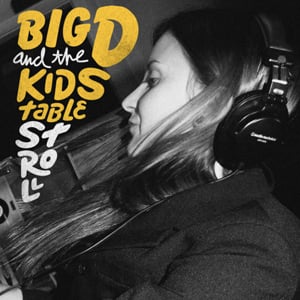 With the help of the fans via a Kickstarter campaign, Big D and the Kids Table were able to round up some dough to release not one but two brand new albums simultaneously. The first album, “Stomp” harkens back to the “Good Luck” era and the sound of the late 90’s ska punk glory days. The second album titled “Stroll” picks up where “Fluent In Stroll” left off with a different sound from the Boston boys that that simply call just that…stroll. Since these are dual albums, I’m going to review both individually. This is what I think of “Stroll”.

“Stroll” is what I would consider a direct sequel of the 2009 release “Fluent In Stroll”. What exactly is stroll music you ask? I would suppose that it can be considered a mix of soul, ska, dub, reggae and…campfire sing-a-longs? I guess the eclectic mix of sounds is what I like and find most interesting about “Stroll”. You can’t quite explain it and that leaves the band with a lot of wiggle room to be creative with these songs. They don’t have to fit certain expectations.

The album starts off with “Knife” a song that, in an alternate reality could possibly be a James Bond theme song. It has an ambient super spy dub sound to it. The second song “Young Suckers” features Big D backup singers The Doped Up Dollies in a song that features a hard rock/metal guitar riff throughout. “Stoll” gives you a taste of Dixieland (Lynn Lynn the City of Sin”), doo wop (“Main Squeeze”), bluegrass (“Drink Me Down”) all the while somehow managing to keep a ska/reggae backbone. There are even some straight up ska/reggae gems with songs like “Put It In A Song” which features Coolie Ranx, “Tell Me Why” and “Our First Day”.

To me personally, “Stroll” is the definitive Big D and the Kids Table sound. While I really, really liked the ska punk romp that is “Stomp”, the songs found on “Stroll” seem to capture my imagination and they just seem to have more heart and soul than the faster ska punk songs and I’ve become a big fan of the sounds of the Doped Up Dollies. They remind me a lot of early Trojan-era female vocal groups. It adds a whole other dimension to the songs. Maybe Big D should just have them on every song and start touring as more of an orchestra than a regular band. I wouldn’t mind.

Bottom Line: “Stroll” picks up where “Fluent In Stroll” left off. The sound is seeped more in traditional sounds ranging from reggae and ska to American and bluegrass. I prefer the laidback songs on “Stroll” slightly more than the hypersonic ska punk found on “Stomp”.
Notable Tracks: Put It In A Song, Better Off Insane, Drink Me Down, Just An Idea, Moment Of Weakness
Overall Rating: