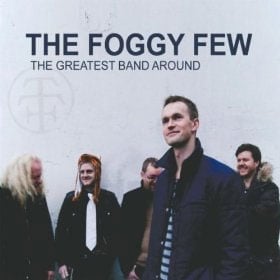 Bergen, Norway’s The Foggy Few are celebrating 10 years together as a band and are releasing their second album The Greatest Band Around. Their sound is a mixture of rock, folk, Celtic, and alt-country. Fun for the whole family!

The band features Atle-Hjørn Øien, who you might know from The Greenland Whalefishers. Speaking of which, Arvid, lead singer of GWF, co-wrote a couple of tunes on here as well. The album starts off with “The Devil Is Alive,” that has a nifty guitar riff that sounds like something out of a Western. This vocals sound somewhat similar to Nick Cave’s a little. At least I think so. In any event, it’s my favorite song off the new album.

“Hoist Me” is another stand-out and “Once I Knew A Maiden Fair” reminds me something Clannad or 70’s Celtic/folk bands would have done. The Greatest Band Around doesn’t offer up anything new but that’s okay because it’s not really the point to play something new. If you’re a fan of ’70s European folk/Celtic music, give the Foggy Few a chance!

Bottom Line: A solid batch of folk tunes!
Notable Tracks: The Devil Is Alive, Hoist Me, Once I Knew A Maiden Fair, Heading For Town
Overall Rating: