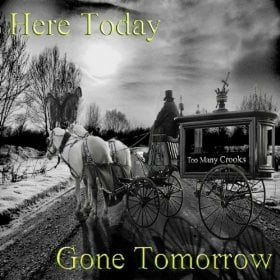 The bouncy ska band from Brighton, England return with 15 poppy ska numbers. Hey, any band that starts off with a song about peanut butter is ok in my book. Well except the Olsen Twins, they suck.

From time to time, I’ll check out Too Many Crooks and their many albums. Their newest album offers more of the same, which isn’t a bad thing at all. I liked the first two tracks “Peanut Butter” and “Barricades,” but it wasn’t until the third track “Jack The Lad” that got me into the album. That track just screams Too Many Crooks. Fast, bouncy, pop ska that would be awesome to skank to. The band does a concept song “Titanic” that is about 6 and half minutes and mostly instrumental. That song stands out from others just being a long instrumental track. While I dug “Titanic” I still prefer songs “One More Day,” and “Mugs Game.”

I don’t think every song on here is great but for the most part, I was happy with this release.