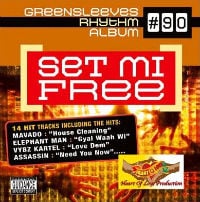 Set Mi Free, the latest in the Dancehall community, featuring today’s hottest artists like Mavado, Mr. Vegas, and Vybz Kartel. Produced by one of the biggest Dancehall producers now, Stephen “Di Genius” McGregor provides a powerful Riddim, and it’s not one of those beats that are annoying and stuck in your head for days.

If you have always wondered why you might have heard a beat or Riddim that sounds like it was featured on another artist’s track, well you probably did. Riddims are huge in the Reggae/Dancehall music industry, and with this “Set Mi Free” Riddim provides fans with what is hot right now. Mavado’s current single “House Cleaning” is a stand out track, as well as Vybz Kartel “Love Dem.” 15 tracks featuring plenty of Dancehall’s all star’s, like Flippa Mafia, and Wayne Marshalll, this is one Riddim compilation fans will want to own.