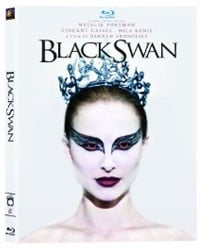 Black Swan is now out on DVD and Blu-Ray, and you can see why the Academy rewarded Natalie Portman for Best Actress. Black Swan is a mixture of Center Stage meets Fight Club….if that makes any sense at all.

The film is about Nina Sayers (Natalie Portman), an unstable young dancer who dances at a prestigious ballet company in New York City. The company is doing a production of Swan Lake, and Nina is up for the lead role. Her director (Vincent Cassel) likes her White Swan but doesn’t think she has the passion to be the Black Swan as well. Besides having whacked out visions and hallucinations of late, Nina also gets paranoid about her understudy Lily (Mila Kunis) trying to steal her job. Nina starts to lose grip on reality, and tries to deal with being an up & coming Ballet star and not freak out.

After seeing Black Swan finally, I’m not sure what I think about the movie. It was a bit dark; a bit trippy. Natalie Portman’s performance is Oscar worthy, so that’s one aspect to like. Vincent Cassel was great as Leroy, and Mila Kunis was decent as well. From a guy’s point of view, the scene with Natalie Portman and Mila Kunis was very nice as well. Sure, it’s a movie about ballet but there’s more to it than that. A girl on girl scene, mind-fuck sequences, and great performances from the actors. I’m not really crazy about the direction though; just felt too indie in some spots for me. Artsy just for the sake of being artsy but maybe that’s just Darren’s style. I felt like some things were set up too easily or easy to figure out what was going. When I was watching this, I was saying to myself: “okay either this person isn’t real, this didn’t happen or she’s just a whackjob.” So I got most of those things right.

If you decide to go with the Blu-Ray, not only will you have a sharp picture to watch but you’ll have a decent amount of extras as well. There’s a metamorphosis featurette, which is about 48 minutes long and goes into a lot of depth of making the movie. I wish more movies went this in depth with the film-making process. Besides that, there’s quick things like theatrical trailers, small featurettes on ballet, the production design. Plus there’s profile features on Natalie Portman and director Darren Aronofsky, and other small features. There’s more than enough bonus material to wet your appetite after the movie.

Black Swan might appeal to some, and others might be turned off by the dark, twisty trippiness of it. I didn’t really hate the movie, but I didn’t really love it either. I like the performances of the actors, and some other things, but not sure this is a movie I’d want to watch multiple times.

Features:
Metamorphosis: A behind-the-scenes documentary with Darren Aronofsky
Behind The Curtain – An inside look at the ballet’s influence on the film’s costume design and production design
Ten Years In The Making – Natalie Portman and Darren Aronofsky discuss their creative journey, from “preparing for the role” to “dancing with the camera”
Cast Profiles – Roles Of A Lifetime – Presented by Fox Movie Channel, stars reflect on their challenging and rewarding characters
BD Live: Go behind the scenes with brand-new exclusive footage
Live Lookup powered by IMDB
Digital Copy