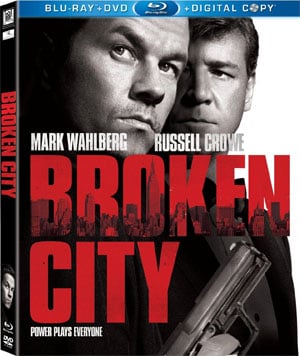 Broken City is an old school corruption, dark crime thriller that has a good cast. If you got less than two hours to spare, this one is a decent flick to put on a rainy day.

The movie is about a New York detective Billy Taggart (Mark Wahlberg), who becomes a private investigator after being forced to leave the police force after a murder case. Several years later, Mayor Nicholas Hostetler (Russell Crowe) hires Billy to investigate his wife, who he thinks is cheating on him. He finds out that the mayor’s wife (Catherine Zeta-Jones) is cheating on her husband with a campaign manager (Kyle Chandler) of his rival (Barry Pepper), who’s running against him in the election. Billy gets in too deep with the info he finds out and his life might be on the line for it.

Broken City is the first movie that Allen Hughes has done solo and I think he did a good job without his twin brother Albert. The story is intriguing and old school in a way when it comes to crime thrillers/noir. Even though I didn’t know what was going on some of the time, I was still interested in finding out how the movie was going to end. I thought one of the main plots should have been scrapped: the whole Bolton Village thing or the investigation with the Mayor’s wife. I think the Mayor’s wife thing was kind of generic in a way but felt there could have been another way to find out that that Mayor was dirty.

I thought the acting was decent and the two leads played off each other well. The one thing I will say about Russell Crowe in the movie is it looks like he stayed out in the sun for too long. Watch the debate scene with him and Barry Pepper, looks like they used 10 spray tan bottles on his face alone. It was distracting to me. Maybe he fell asleep outside while suntanning? Speaking of Barry Pepper, glad to see him in movies again because it seemed like he went away for awhile when Battlefield Earth came out. Jeffrey Wright is always great in his role and kind of wished he was in the movie more.

The Blu-ray combo has a few featurettes to watch like deleted scenes, alternate ending, and in-depth behind the scenes look at the making of. I loved the making of stuff since I’m always interested in how these things get made. The script was from Brian Tucker, whose script was on the “Black List.” A place where scripts are usually passed and in limbo so to speak. Some people may not like the script but you know what, I’m just glad this isn’t a franchise, remake, or sequel to something we have already seen. Hollywood needs more original scripts!

Broken City could have been better in some areas but it’s a decent noir flick worth seeing at some point. Its the type of film you don’t have to rush out to see and catch it on TV when it airs.

Putting It All Together Documentary – A Behind The Scenes Look, Including A “Black List” Script, Anatomy Of A Thriller, A Cast Profile and More!
Deleted Scenes
Alternate Ending
Digital Copy Included
Audio/Video