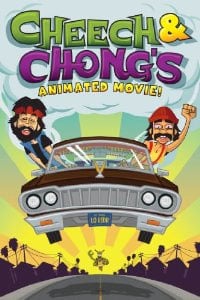 Before there was Harold and Kumar, there was Cheech and Chong. Cheech Marin and Tommy Chong are reunited and back together for their first movie since the 1984 movie The Corsican Brothers…but this time they are animated.


Cheech and Chong’s animated movie is just a series of random sketches that might be similar and familiar to you if you’re a fan of theirs. Some of the sketches they do (in animated form) might I add are things like “let’s make a dope deal,” “Dave’s not here,” “Earache My Eye” and more. The way that the sketches work and flow is showing Cheech and Chong driving, walking or just watching TV.

I’ve a fan of Cheech & Chong’s movies like Up In Smoke, Next Movie and Nice Dreams but was never really into their comedy sketches and albums as much as the movies. I decided to check this out to see how it was since I didn’t get to see the duo on stage for their recent reunion. This is okay, but I didn’t really laugh as much as I cringed at the gross animation. It kind of reminded me of Ren and Stimpy a little with the animation. Showing little crab creatures in a girl’s hairy vagina and things like that. I’m not a prude or anything, but it was still kind of gross haha. For what this is though, the animation still does the job and is decent enough.

While it’s great that these guys did another Cheech and Chong movie, I just wish it was a non-animated movie and something along the lines as Up in Smoke or Nice Dreams. Some of the sketches weren’t funny to me or maybe I’m just not a stoner. I just think it would be have been better if they could star in a movie and have it about them being old and still stoned. Fans of the earlier stuff might like this better than I did.

The Blu-Ray offers up a plethora of commentary tracks, some 4:20 listening mode and a quick behind the scenes clip of them recording their vocals. All in all this, Cheech & Chong’s Animated movie is for the hardcore Cheech & Chong fans.