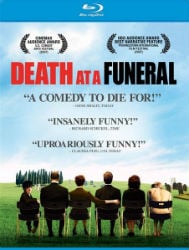 Death at a Funeral, the 2007 film directed by Frank Oz is one of the funniest films to come out in the last 5 years. No, not the unwanted remake starring Martin Lawrence, but the original British comedy is the film that is quality. Starring Matthew Macfadyen as a grieving son having to hold a proper funeral in a beautiful countryside cottage, must say his goodbyes with his family and it turns out to be anything but proper. Peter Dinklage co-stars and as usual always steals the spotlight. If you want to piss your pants laughing, than you might want to check out Death at a Funeral.

Having to say goodbye to a love one is never easy, but the topic of a comedy is even tougher. Frank Oz and the script by Dean Craig do a great job of making a tough subject hysterical. Stereotypically a bit uptight, the family involved is a British family out in the countryside, and all friends and family gather to pay their respects. Daniel(Macfadyen) and Robert (Graves) are brothers who must say goodbye to their father. Daniel is the one who always looked up to his father, yet could never seem to win the approval of Dad. Robert on the other hand was the hotshot successful son who lived in New York, flies first class, and is a socialite. Now its up to Daniel to organize this funeral and just about the worst things can go wrong, like unexpected visitors, and medication errors. Not to spoil anymore, it turns into a wild, and crazy ride.

This film didn’t really hit it off here in the US, which makes you wonder what needs to happen in order for audiences to go out to the movies? Maybe the subject matter, but man this is one funny flick. The cast is great and features generally a mostly British cast, except perhaps Alan Tudyk, and Peter Dinklage, both were excellent and very funny. They must have been doing something right, if this film spawned a unnecessary remake two and half years later.

Frank Oz and the crew did a great job of covering a delicate subject and making it just so outrageous as this family still grieves, with all this zany drama occurring before and during the funeral. Matthew Macfadyen was pretty unknown here at the time, and did a great job as the “everyman” role. He’s gone on to land bigger roles in Robin Hood and soon to be, The Three Musketeers. The casting was great, locations and the story was perfect. The blu ray didn’t feature many extra features but there was commentary from cast and crew as well as a funny gag reel. The film looked good in blu ray, with occasional film grain which is good sometimes as well. At the time, seeing this in the theaters, I haven’t laughed out loud like that in ages so it earns my praise whenever I have to recommend a film to somebody. Go watch it!