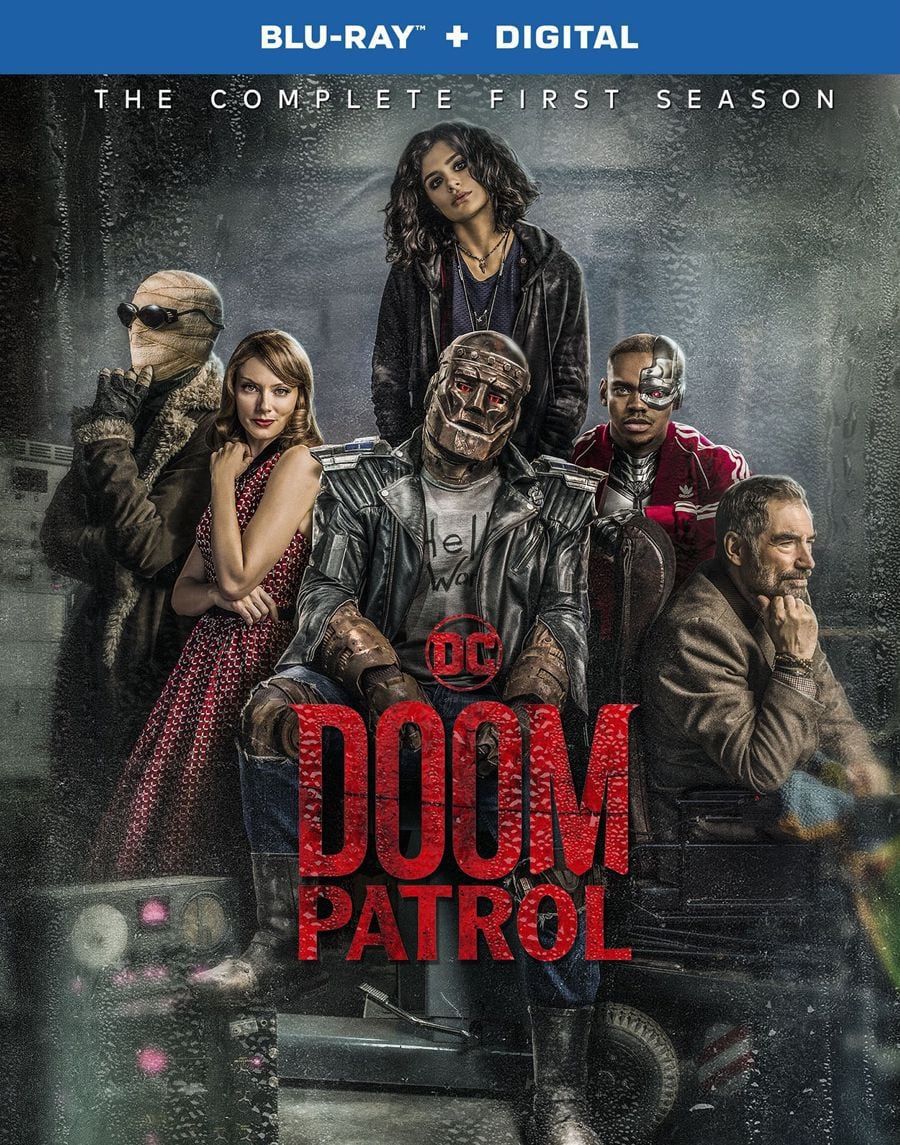 Hidden away from the world, a group of freaks and misfits band together to save the world but only after they can save each other.

“Doom Patrol: The Complete First Season” is made up of 15 episodes, each aptly titled with some kind of “patrol” in the name. Throughout the course of these 15 episodes such as “Donkey Patrol”, Cyborg Patrol” and “Doom Patrol Patrol” for example, you’ll meet Cliff Steele AKA Robotman, Rita Farr AKA Elasti-Girl, Crazy Jane AKA Crazy Jane, Larry Trainor AKA Negative Man and, if you’re familiar with the modern Justice League team or anything Teen Titans from the 90’s you’ll already know Victor Stone AKA Cyborg. These men and women make up what comes to be known as the Doom Patrol. Under the guidance of the Chief AKA Dr. Niles Caulder, they’ve come together to face the weird, odd and unpredictable head on…or they’re just chicken out and run away as they have on many occasions.

The first season of “Doom Patrol” follows up with their introduction in the “Titans” show on DC Universe Streaming. Unlike the CW line of DC superhero shows, DC Streaming Universe is unrated and isn’t afraid to push the boundaries of that simple fact. Whether it’s over-the-top violence, gratuitous sex scenes or some fairly dark subject matter, “Doom Patrol” makes it work perfectly into the narrative or each episode.

Unlike “Titans” which is dark and gloomy in a 90s Tim Burton kind of way, “Doom Patrol” takes its cues from the comic that it is based off of which means lots of weird, crazy and just downright insane subject matter. If Robotman isn’t murder Nazis from the land of Georiga to the tune of the Dead Kennedys “Nazi Punks Fuck Off”, the team is facing off against giant cockroaches, a genderqueer street named Danny, the Bureau of Normalcy or the main antagonist of the show Mr. Nobody, played insanely perfect by Alan Tudyk.

Early on, the show had a fast pace to it as you were introduced to each member of the Doom Patrol and they were abruptly thrust into situations that were way out of their league. This would usually result in Cliff Steele saying “fuck” a lot and then the group failing to save the day to their best efforts. As the season progressed, the pace slowed down to focus more on the tragic backgrounds of the members of the Doom Patrol and their deeply messed up inner workings. As I mentioned earlier, this is where the show began to touch upon the darker and more mature subject matter. We learn that Crazy Jane’s fragile mind was split into dozens of other personalities due to a perverted and abusive father. We discover how cruel Rita had been in her early Hollywood days and how she feels that she deserves all of the bad things that have happened to her even though she is a good person. We learn that Larry Trainor hid a secret life and love from his family and felt that his family was better off without him after the accident that joined him and the alien lifeform inside him.

One of the things that I liked the most about “Doom Patrol” was the introduction of Cyborg on the show first instead of throwing him into the mix of “Titans” right away. While Cyborg never had connections with the Doom Patrol in the comics, this version of Cyborg is a much younger version that has to work his way through some traumatic events much like the rest of the team does. He is dealing with the guilt of accidently killing his mother as well as the fact that he more machine than man. He’s not the fun-loving, wisecracking goofball that most fans know and love…yet. Instead we get to see him work through the darkness all the while still holding that optimism and youthful energy that will soon shine through the darkness. It’s a unique path for the character to take to get to the Cyborg we know and love, but it makes him a much more relatable character and one that knows what it’s like to walk the long dark path.

The casting for “Doom Patrol” much like for “Titans” is spot on. From the great Timothy Dalton as Dr. Niles Caulder, to Brendan Fraser as the voice of Robotman and as Cliff Steele…washed up NASCAR driver, to Diane Guerrero as the many personalities of Crazy Jane, Joivan Wade as the aforementioned Cyborg and Alan Tudyk as Mr. Nobody…everything just works perfectly. Whether they are having a personal moment of reflection among each other or screaming at each other and at each other’s throats, there is plenty of chemistry amongst the cast. As a long-time fan of Alan Tudyk, it was an absolute thrill to see him shine as Mr. Nobody and just embrace the weirdness and craziness of it all.

While the beginning of the show was fast-paced and the middle was the meat and potatoes of the season, I would have to say that I was somewhat disappointed by the way that the season wrapped up. After a major plot twist and reveal of something sinister in regards to the Chief, the lead up to and final battle against Mr. Nobody was off-putting, disorienting and somewhat completely out of nowhere on top of being very anticlimactic. The last two episodes felt rushed or as if they were directed by someone who didn’t watch the rest of the show beforehand. There were some fun and weird moments in those episodes but I was left with a feeling of confusion as to where they were actually going with the ending. Perhaps there was something obvious that I couldn’t quite grasp but overall, it just didn’t do anything for me.

Most of the other DC shows have a load of features available upon release; “Doom Patrol” only includes a couple of small features. There’s a gag reel, some deleted scenes and a PSA regarding the fictitious location of Georiga. Not much to write home about but there are some decent deleted scenes and the gag reels are always funny especially with the group of comedians that make up the “Doom Patrol” cast.

“Doom Patrol” continued to build upon the new universe created with “Titans” with a group of the most unlikely of characters. Doom Patrol was never a household name outside of the comic book circles even when legendary talent like Grant Morrison and John Byrne were working on the title, but that’s what makes the show fresh and likeable. These characters (outside of Cyborg) don’t have to live up to any kind of standard and legacy to a mainstream audience. There are plenty of nods to the comic book lore and history but this show is going to be the penultimate telling of this group of misfits and freaks and that’s what makes it work so well…you can pretty much go anywhere with the story and do as you please with characters like Danny the Street, Flex Mentallo, Negative Man and Mr. Nobody with no restraint. If you’re looking for the odd, goofy and weird…”Doom Patrol” has your name written all over it.

Bottom Line: “Doom Patrol” allows us a glimpse at the darker and much more strange side of the DC Universe while also providing us with some of the most tragic and likable characters in the live-action comic book realm. Their story isn’t happy and full of laughter and joy but you’ll most likely enjoy the over-the-top action, quirky characters and plotlines and you’ll absolutely love the cast and what they bring to the table as these D-list comic book characters. If you don’t then I warn you, you’ll have to answer to the Beard Hunter!