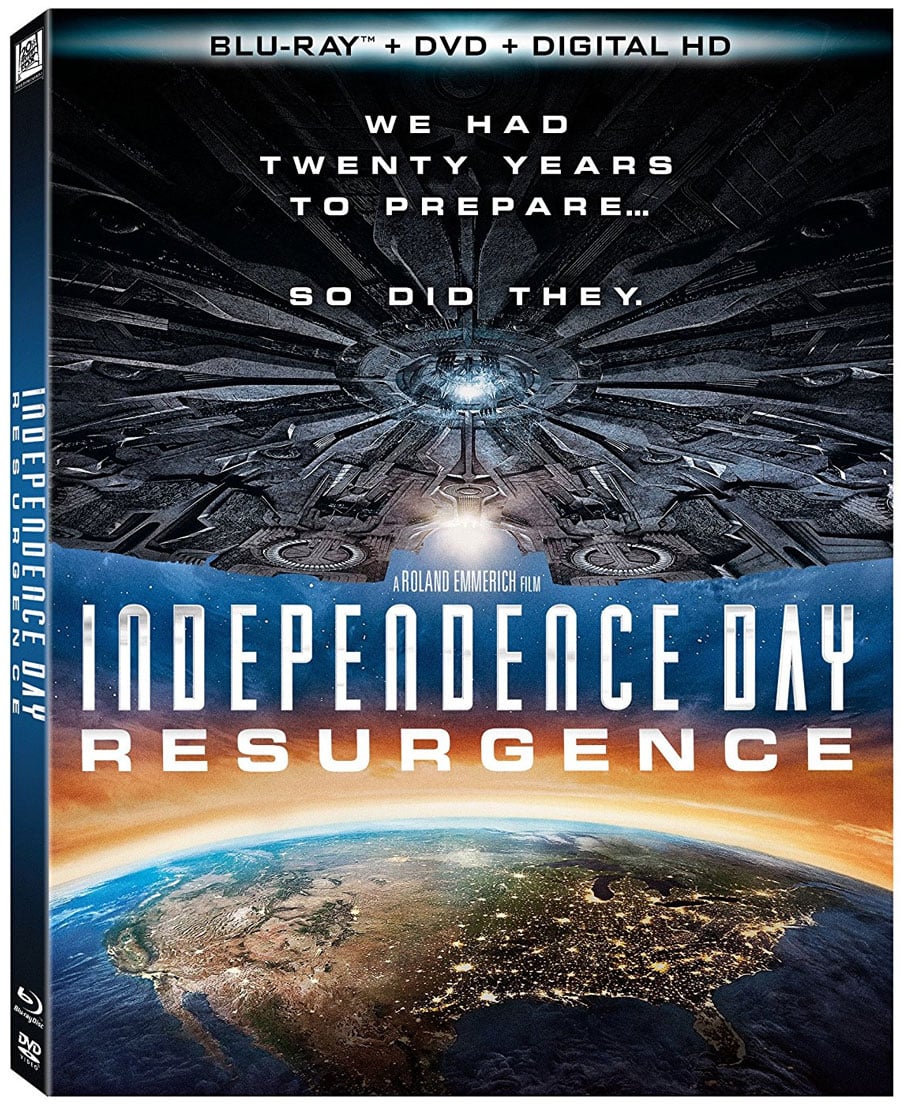 The latest movie to suffer sequelitis is Independence Day: Resurgence. While the movie is entertaining, it also feels rushed and you don’t care about the characters all that much.

Independence Day: Resurgence takes place 20 years later after the events of 1996. Earth seems to have evolved quite a lot since being attacked. In the real world, we haven’t gotten attacked by aliens and we can’t even fix the damn roads. Yet in this world, they developed alien technology, have moon bases and other crazy technology that probably won’t happen in our lifetime. But anyway, Earth Space Defense (ESD) director David Levinson (Jeff Goldblum) discovers that a fallen alien spaceship from the war sent out a distress signal back to its planet. Even though Earth is somewhat prepared, they aren’t prepared for what’s coming for them. Some of the people that set out to stop the aliens from destroying Earth include U.S. pilot Jake Morrison (Liam Hemsworth), former U.S. president Whitmore, stepson of the deceased war hero Steven Hiller, Captain Dylan Hiller (Jessie Usher), and Whitmore’s daughter, Patricia (Maika Monroe).

I didn’t have high expectations for the sequel to ID4 and that probably was a good thing. I enjoyed the movie but there are obviously some things missing from the movie or just didn’t work. The biggest elephant in the room is the star power of Will Smith…but a lot of the other original cast do return. My problem isn’t with the old cast, it’s the new cast because I really didn’t care about any of them living or dying. None of them stood out besides Maika Monroe, who played Bill Pullman’s daughter. Liam Hemsworth character wasn’t really special and his acting was quite flat, same goes with Jessie Usher. Usher didn’t contain the swagger as Will Smith. His character should have been in the forefront but he’s pretty much a secondary character.

The old cast was better, Jeff Goldblum is Jeff Goldblum and he could do no wrong. I guess some people think him doing this movie was wrong but the sequel would have had an even bigger hole if he wasn’t in this. Bill Pullman did his part and is looking mighty old these days but I liked his arc. The surprise was seeing Brent Spiner back, considering we all thought his character died in ID4. Apparently he was just put in a coma for 20 years, conveniently he wakes up in the beginning of the movie. He actually was a scene stealer for me because he seemed like one of the few people to just embrace the campiness and have fun with it. After all, he was on Star Trek. Another person having fun with his role again was Judd Hirsch. Although he felt out of place and thrown into the mix for comic relief again. Vivica A. Fox is in the movie again for a little bit and she traded in the stripper pole for an old lady haircut and mom’s jeans. Apparently this was Robert Loggia’s last role but honestly, I think I must have blinked because I didn’t see him in it. The movie was dedicated to him which was nice.

As far as the overall movie is concerned, I thought a lot of it was rushed or not fully developed. For me, seeing things get destroyed or get destroyed again wasn’t as impactful as the first movie. It felt more impactful in ID4 because everything was normal then. Now everything was already destroyed or slowly being rebuilt. This was part disaster movie but it was also an action/war movie. I liked the last half hour or so because the movie was finally fun to watch. The CGI looked amazing but the premise of them fighting a Queen Alien felt like something out of Aliens the movie. When certain characters, some more important than others, would die; I would just shrug my shoulders because I just didn’t give a crap. Plus, it seemed like they re-hashed a lot of the same stuff from the first movie. Did the climax of the movie really have to be in the desert again at Area 51. Granted that’s where their base was, I’m sure you could have picked somewhere else for the sequel. I suppose if there’s a third movie, which the ending seemed like there would be, it looked like it would take place just in space. I wouldn’t be opposed to that.

The Blu-Ray contains some deleted scenes, audio commentary, a quick featurette about the War of 1996, a gag reel, and an hour long making-of documentary. The gag reel was amusing as most usually are and the deleted scenes were okay. The big sell in the extras is the documentary because you get a nice, in-depth look at everything. You get cast interviews, scenes from the set and things like that. Definitely check that out if you enjoyed the movie.

ID4: 2 is what you expect from most long-awaited sequels these days. Updated look, some of the cast is back, mediocre plot & new characters and it’s nowhere as good as the original movie. With that said, I still liked the movie and would watch again but just know going into it, it’s not as good as ID4.