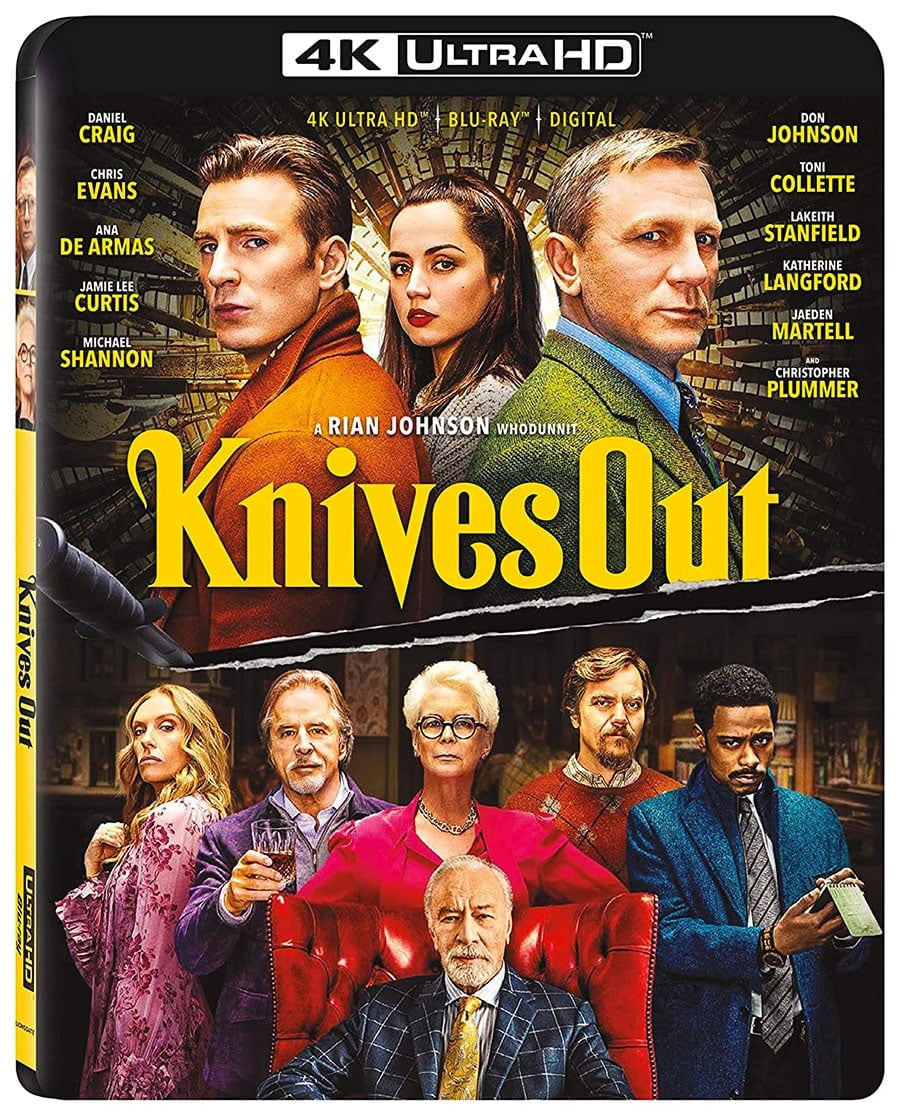 A movie I thought deserved more attention at award season was Knives Out. A highly entertaining “who-done-it” murder mystery even though you can figured out pretty quickly who was behind things.

Detective Benoit Blanc (Daniel Craig) is called to the famous crime novelist Harlan Thrombey’s (Christopher Plummer) mansion as there has been a mysterious murder that has happened. Everyone that’s a part of the Trombey family is considered a suspect including Harlan’s spoiled playboy grandson Hugh (Chris Evans), son-in-law Richard (Don Johnson), Harlan’s nurse (Ana De Armas), Harlan’s youngest son Walt (Michael Shannon), Harlan’s eldest daughter Linda (Jamie Lee Curtis) and others. Blanc is determined to get to the bottom of things and try to figure out what’s a lie and what’s the truth.

Finally a movie that isn’t based on a franchise or from a book – an original screenplay by The Last Jedi’s director Rian Johnson. He took all the criticism for Star Wars and never directed or wrote a movie again! Oh right, he went on to write and direct a movie that was nominated for some awards after that. Rightfully so, because Knives Out was highly entertaining murder mystery. Granted you know who dies pretty quickly, and who did it. Of course there’s some twist and turns in there, like with most type of murder mystery films. It was just a blast to watch from start to finish, at least I thought so.

The cast is all-star, what can you say. You have Daniel Craig doing a Southern accent, Ana de Armas being caught up in all the drama, Chris Evans playing a smug douche, and of course Christopher Plummer being a delight to watch in the time he was given on screen. Can’t forget Jamie Lee Curtis, Michael Shannon, Don Johnson and Toni Collette as well. With an all-star cast that is this vast, it’s a shame they didn’t see as much as screen time as they all deserved. People had issues with Craig’s accent but I didn’t think it was too much of a distraction. Honestly, the first movie that I saw him in was Road to Perdition and he spoke with an American accent so…

If you have the 4k or Blu-Ray, there’s a bunch of special features commentary, deleted scenes, a feature-length featurettes called Making a Murder, a decent Q&A with the cast and Johnson, and some other things. The Making a Murder multi-part documentary was excellent and very long. Definitely something to watch after you see the film, to see how Johnson developed the story and filmed it. I love when there’s this much content included on Blu-Ray and 4k discs. The deleted scenes were okay, and come with commentary if you want to hear what Johnson thought. They were just small snippets, mostly featuring Detective Blanc and some of the other characters that didn’t get featured as much.

Rian Johnson developed an interesting character with Blanc, but just the overall story as well. While you can sort of figure out who did something, it’s how you got there that was the most important part. I can’t wait to see the sequel: 2 Knives 2 Out. I highly recommend seeing Knives Out!