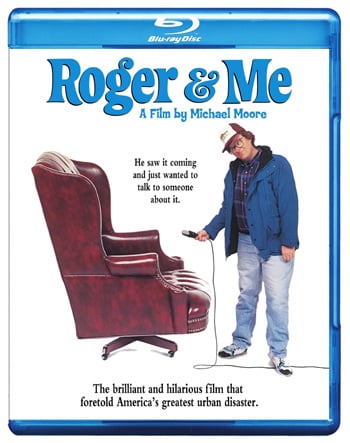 Roger & Me made Michael Moore a pioneer in independent filmmaking. The movie is celebrating it’s 25th anniversary and is out on Blu-Ray for the first time. The documentary is just as important now as it was back then.

Moore begins the documentary talking about growing up in Flint, Michigan and how GM affected him personally and what it meant to his town. After a short stint with Mother Jones magazine, Moore returned back to Flint and that’s when the town went to shit. The GM factories were closed down and it affected pretty much the entire town. For most of the movie, Moore tries to get an interview with GM’s chairman Roger Smith and persuade him to visit Flint. He focuses on several people and how they are coping with Roger & Me is done in a humorous way, despite how depressing things truly are. Moore is a genius when it comes to attacking corporations and corporate America.

I’ve never seen Roger & Me but I’ve seen a lot of other stuff from Michael Moore. I’m a fan of his and love the mixture of comedy, real-life drama, and gotcha journalism in his movies. Surprisingly, Roger & Me holds up very well for being released in 1989. In fact, it’s probably just as relevant today than it was back then. More and more of this kind of stuff is happening with factories closing down and jobs being outsourced outside of the US. I guess corporations sucked just as bad back then than they do now.

Moore puts his personal spin on things and does things in a humorous way that makes this still enjoyable to watch after all these years. I particularly love the fun music that goes along with the movie. I think if Moore’s approach was just plain serious documentary, I don’t think it would have worked as well.

The Blu-Ray looks okay for a 25 year old movie. It certainly looks better than a DVD or VHS. There’s some noticeable grain throughout but not too bad. It is what it is. There’s audio commentary with Moore and that’s pretty much the only special feature on the Blu-Ray. Since I never saw the movie, I didn’t check out the commentary.

Roger & Me is still worth watching after 25 years and it’s still an important movie. After seeing this, it makes me want to watch Michael Moore’s other movies but really, I just wish he’d make a new movie already!