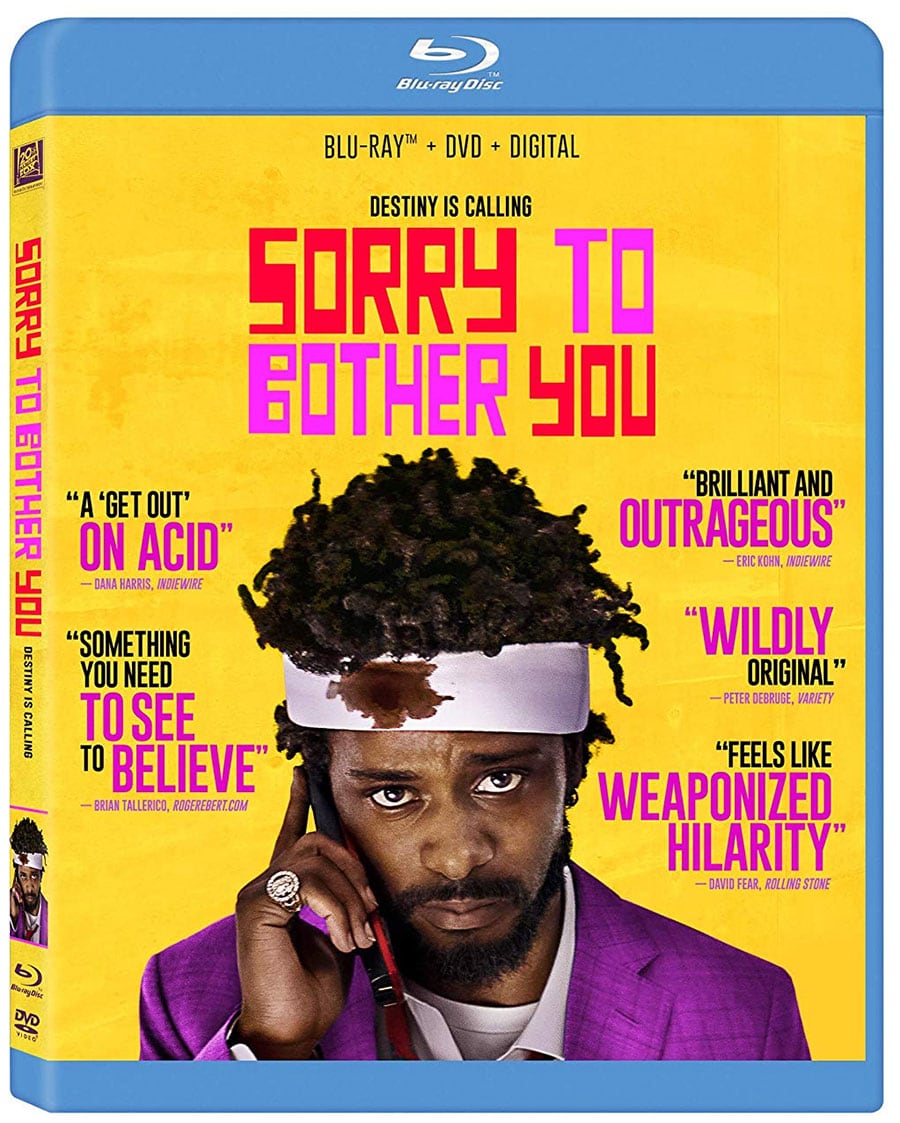 Starring: Lakeith Stanfield, Tessa Thompson, Jermaine Fowler, Omari Hardwick, Terry Crews, Patton Oswalt, David Cross, Danny Glover, Steven Yeun, Armie Hammer
Written By: Boots Riley
Directed By: Boots Riley
Studio: 20th Century Fox
Buy On Amazon.com
I saw the trailer for this movie and I was like, “man I need to see that movie – it looks bizarre!” Sorry To Bother You is Boots Riley’s directorial and screenplay debut and he has come up with something unique, different and a movie that will get people talking.

The movie is about Cassius “Cash” Green (Lakeith Stanfield) who sleeps in his Uncle’s garage and is dating Detroit (Tessa Thompson). It’s set in an alternate reality in a way. The only job he can get is at some telemarketing company. At first, he has trouble selling anything until an old coworker (Danny Glover) tells him he needs to do his “white voice” to get people to listen to him, which is just David Cross’s voice. By doing that creepy white voice as his friends say, Cassius gets promoted to Power Caller and becomes successful while others are protesting for better wages. Even though he’s getting lots of money, he still feels uneasy about the work he’s doing and finds out the company he works for is doing some crazy stuff.

The movie is part absurdist comedy, dark satire, sci-fi or fantasy and it’s just a unique blend of things. It’s about capitalism, race, office settings, and well-hung equisapiens. That last part will make sense when you see the movie. It’s really hard to describe this movie and give people a sense of what it’s about. It’s almost like if you merged Monty Python, Do The Right Thing, The Lobster and Get Out together. The Lobster comes to mind, since both just get crazier as the movie goes on. The second half of Sorry To Bother You will be make or break time with some people. Some will just go with it and enjoy it for what it is and others will bail.

What makes Sorry To Bother You so interesting and different is the story, the screenplay, the way it was shot by Boots. I haven’t seen something like this in awhile. It just felt fresh. Having this movie be around telemarketing and corporations makes the movie better; there’s a lot of social commentary in this. The movie has a few laugh out louds, especially the rap song Cassius is forced to sing for everybody. The cast was pretty great as well and half the people I didn’t even know where in this until I was watching the extras. Well, besides David Cross and Patton Oswalt, I didn’t know some of the other voices we heard like from Rosario Dawson, Forest Whitaker, and Lily James. Lakeith Stanfield definitely did a great job with the role and it’s almost like he’s acting just in his eyes.

The Blu-Ray extras include commentary, a featurette with Boots explaining the premise, his ideas, his background on music & getting into film, and things like that. We learn in there that he’s been friends with Danny Glover for years since his Dad was friends with him back in the 60s/70s. There’s some standard EPK promotional trailers of the cast with 2 quick little features. Not a whole lot of featurettes though.

Sorry To Bother You is a unique movie that people will either be on board with or won’t be. I enjoyed the movie and thought it was funny, different and looking forward to seeing what Boots Riley will do next.