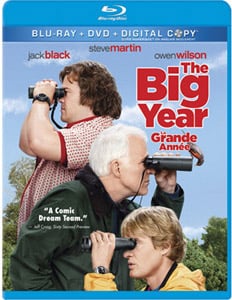 Talk about a movie with a lot of potential, an excellent cast, and a whimsical premise that just falls deader than jay bird. I really tried to like The Big Year but it was just boring and not funny at all.

The movie is about 3 birders, bird enthusiasts who compete in The Big Year. It’s a competition to see who can see the most species of birds in one year all over the world. Brad Harris (Jack Black) is a programmer who can tell what bird is what just by listening to it; Stu Preissler (Steve Martin) is a retired CEO from NYC trying to beat the world’s best bird watcher, Kenny Bostick (Owen Wilson). Bostick is competing in the Big Year and trying to beat his own record. Brad and Stu team up and try to take down the best bird watcher together.

This movie had such a great supporting cast: Joel McHale, Jim Parsons, Anthony Anderson, Tim Blake Nelson, Anjelica Huston, Kevin Pollak, Corbin Bernsen, and yes, even Al Roker. Plus the three headliners. Yet with all these stars, the Big Year didn’t deliver one laugh from me. Not even a chuckle or a ha ha.

The movie wasn’t necessarily bad, I just don’t think the filmmakers had any idea what kind of movie it should be. Is it a comedy? whimsical drama? It’s a bit quirky since it’s about bird watchers but everything just falls flat. This idea had potential to be very funny and quirky like a Best In Show movie or something in the gross humor type movies but nope. The Big Year isn’t any of those. It’s a just flat comedy and boring plot & characters. Another question might be is why so many actors agreed to do this if they read the script. Did they think it was funny or did they just want an easy paycheck?

It’s cool that they actually filmed the movie in the places the characters went to, which is neat to see. But that’s about it. A lot of the birds are CGI, which is kind of distracting in a way for me. I like birds too, but seeing CGI birds is a bit lame. But what’s even more distracting is all these good actors in this shitty, boring movie. Hell, I didn’t even mind Jack Black’s performance because he wasn’t an annoying, over-the-top douche like he usually is. That still doesn’t change the fact that the story is weak and the script is just unfunny. The subplots of the birders families back home just didn’t justified them being out there looking for all these stupid birds. Honestly, it just makes them out to be big, out of touch losers. Some of the things they pass up just to spot birds is a bit crazy. Again, could have went really crazy in the movie and make it funny, but no, that opportunity failed.

The Blu-Ray and DVD combo featured an extended cut of the movie, as well as a theatrical. I watched the extended, which really wasn’t that extended cut that barely made it over an hour and 35 minutes. There’s a few featurettes like deleted scenes, a gag reel, and a decent behind the scenes look at the making of the movie. The behind the scenes featurette was about 20 minutes and just shows interviews, and the cast acting in various places that they shot. Between that and the gag reel, those are the funniest thing on this disc.

The Big Year had potential based on the cast and story idea, but it’s just a boring mess of a movie that’s supposed to be a comedy.

Bottom Line: Not even sure this is worth renting
Running Time: 100 mins
Rating: PG
Extras Rating:
Overall Rating: