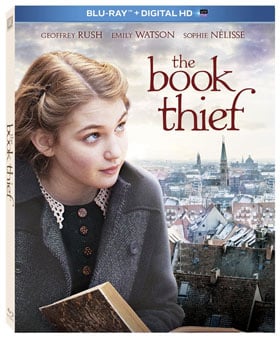 The Book Thief is based on the book by Markus Zusak, which I haven’t read but I heard the book is better than the movie. Isn’t that always the case? The movie features a good cast, an excellent John Williams score and a different kind of WWII story.

The Book Thief is about Liesel Meminger (Sophie Nélisse), a young girl whose Mom is a Communist and is brought to her new German foster parents Hans and Rosa Hubermann (Geoffrey Rush and Emily Watson). They have agreed to raise her for fear that her Mother will be captured by the Nazis. Liesel starts out illiterate but is encouraged to read and write by her adoptive Father. Eventually she becomes fascinated with books, writing and after witnessing a book burning, secretly steals a few to read. Hence the title of the book and movie. The Book Thief is much more than a young girl stealing books, as it’s about being young during WWII in Nazi Germany and seeing the world crumble around you.

I didn’t think really think much of The Book Thief when I saw the trailers. Since I watch a lot of WWII-related things and the fact that John Williams does the score for this, I decided to watch this drama. After seeing the movie, I liked it and thought the acting was good but the narration by the Angel of Death felt weird to me. Maybe it works better in the book but just felt hoaky in the movie. I was interesting to see the side from people living in Nazi Germany, but felt they didn’t show the true nature of things during that time. Granted this is a historical fiction film, but maybe would have benefit from showing more brutality from the Nazis standpoint? For the most part, the Book Thief is tame in comparison with other WWII films.

With that said, I still enjoyed it and really loved Geoffrey Rush’s character and of course Liesel. I’m sure we’ll be seeing much more of her over the years. The snowball fight was my favorite scene because it was lighthearted and fun, despite the times they were living in. I kind of wished we saw more of Hans going to the Army instead of just one scene. Maybe he had to do some bad things and they didn’t want to tarnish his character?

The special features on the Blu-Ray include a featurette on the making of, and a few deleted scenes. The making of is about a half hour long and covers a lot of ground in that time. There’s interviews with the author, the cast, composer John Williams and other things. There’s about 6 minutes of deleted scenes but I honestly can’t remember any of them so it’s probably a good thing they weren’t in the movie.