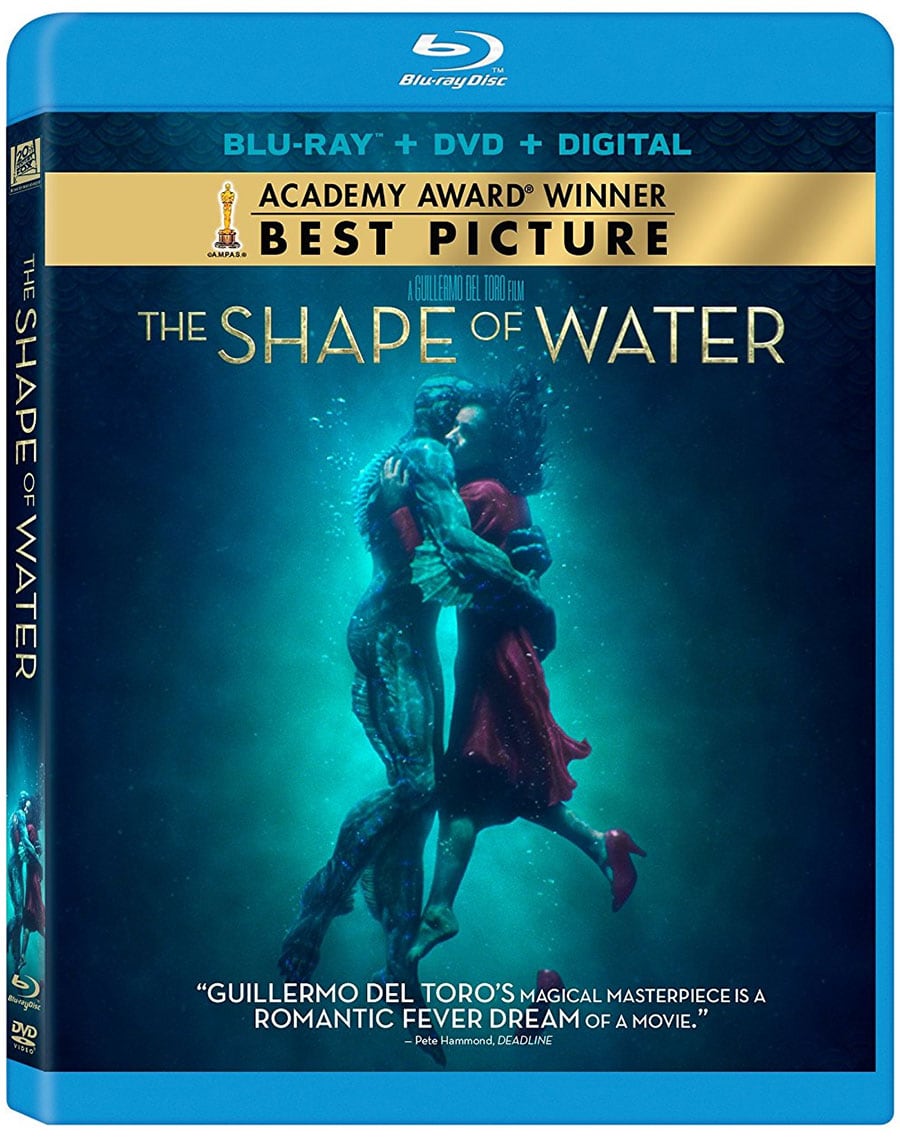 The Academy Award winner for Best Picture is now available on Digital HD, DVD and Blu-Ray. The movie is beautifully shot, the acting is done really well but I don’t agree that it was the Best Picture winner. It’s pretty much a darker, reimagining of Splash when you think about it.

During the Cold War era, a secret US Government facility obtains an amphibian type creature from South America. Elisa (Sally Hawkins) is a mute, cleaning woman at the lab, as well as her friend Zelda (Octavia Spencer). Elisa’s neighbor Giles (Richard Jenkins), is her closeted illustrator neighbor and a close friend. The creature was caught by Colonel Richard Strickland (Michael Shannon), who oversees the project at the lab and wants to vivisect it. Scientist “Robert Hoffstetler” (Michael Stuhlbarg) wants the creature unharmed so they can examine it further. Elisa begins bonding with the creature since both can’t talk and she offers him hard boiled eggs. Things take a turn for the worse when Elisa finds out that creature will be harmed, so she breaks it out with a help of Giles and Robert.

All the talk that this was going to be an Oscar winner, I had to check out the movie before the Academy Awards. While a lot of people loved The Shape Of Water, I thought it was good but nothing that special. It was shot beautifully, the music by Desplat was great, the acting was good but I didn’t think it deserved the Best Picture award. * * Going to discuss some spoilers here, so beware! * * This movie is essentially Splash, except it doesn’t star Tom Hanks and doesn’t feature a mermaid. A lot of the same things happen in the movie; even the ending is practically the same give or take. Both are rescued from a lab, people are after that character, the person that helps break free the creature, falls in love with it, both movies have the people jumping into the water to be with that creature in the end. It’s really, really similar and essentially the same story in a nutshell. I guess the only thing missing from Splash was fish fucking, at least then it would have been Daryl Hannah instead of a weird looking fish man. I’m sure people will say the same about The Force Awakens and A New Hope but I disagree about that. Things were changed up enough for me to think of them as separate movies. Sure, some things are borrowed or reused but not the entire plot.

As much as I like to poke fun at The Shape of Water, it’s still a movie I’ll probably watch again. Guillermo is a talented director; I’m hoping he does a Star Wars movie at some point. The film is just beautiful, and I like the era that it’s set in. There’s a bit of grounded fantasy with this, considering there’s a walking fish man around. As much as it’s a bit creepy to see someone in a loving relationship with a fish man, the shot that I like is the face of Sally Hawkins’ character as she’s holding him after making love with him in the bathroom. It’s just pure love and happiness on her face. If that whole lovemaking scene didn’t work in the movie, no one would be talking about this movie right now. That bathroom scene would have derailed the entire thing.

The Blu-Ray has about 45-60 minutes worth of extras. There’s a bunch of featurettes on the making of the movie, some anatomy of a scene featurettes, a Q&A with Del Toro, and a conversation with James Jean. I liked watching the various featurettes on the making of the movie. Guillermo is a movie geek and you can just tell the way he approaches some movies. It makes his movies better for it. You get some great cast interviews, see how some of the special effects came to be and watch Desplat conduct some of the orchestra for the music. There was a lot with Doug Jones, who portrayed the creature and seems like he’s the go-to guy for these roles, just like Andy Serkis is for motion captured roles.

The Shape of Water will be loved by many and some will just shrug their shoulders and say, “eh I don’t get it.” It will be forever known as that fish-fucking movie and with good reason. Sure, it’s a beautifully shot movie and Del Toro deserves his Oscar wins but I wish it was for another movie. It’s a good movie but I just can’t help but think of this a reboot as Splash instead of Beauty and the Beast.