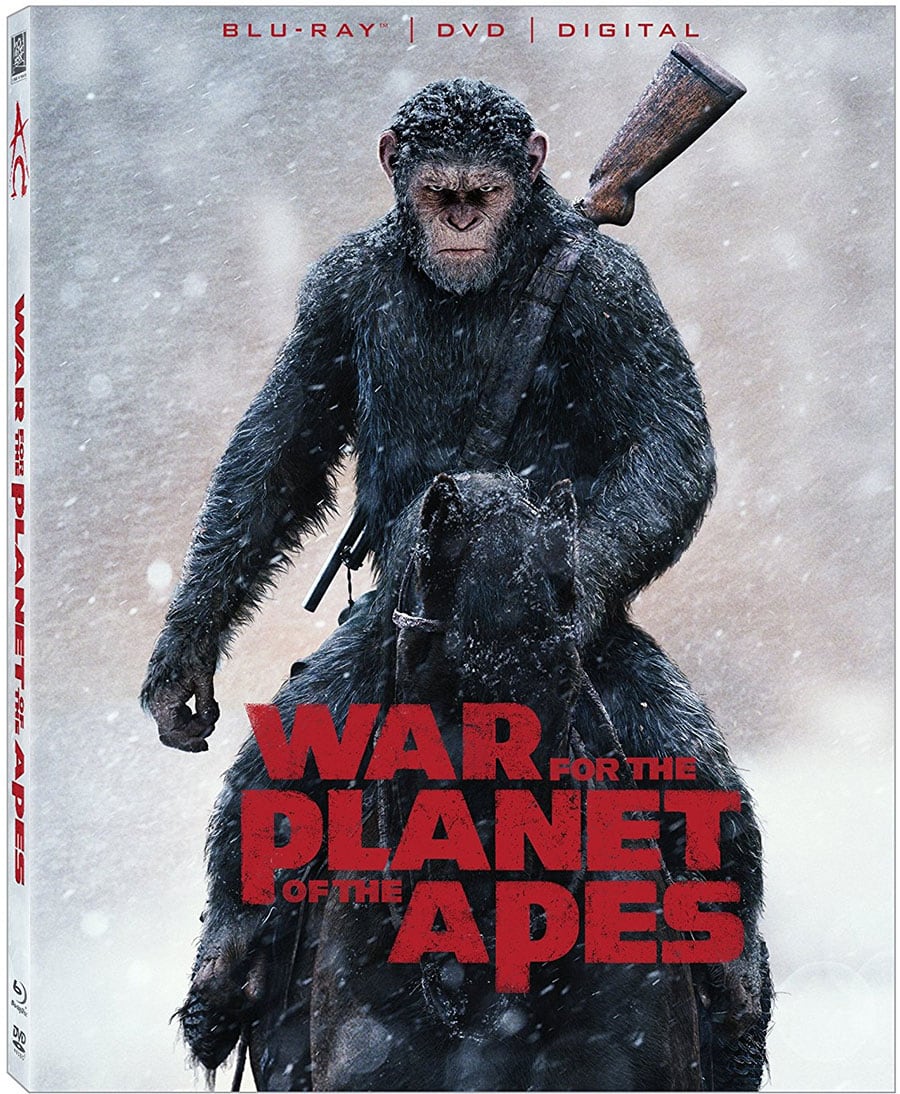 I haven’t seen the rebooted Planet of the Apes movies until last week. I should have watched them sooner because this was an excellent trilogy! War For The Planet Of The Apes is the last of the trilogy and probably the best of the three (although that’s up for debate).

War takes place a little bit after Dawn of the Planet of the Apes. The soldiers that Caesar (Andy Serkis) was warned about have showed up and want to wipe out the apes to save humanity and Earth. All the apes want is to be left alone but they are forced into conflict with the Colonel (Woody Harrelson) and his soldiers. After suffering many losses, Caesar wants to avenge his kind but worries he will become like Koba.

I wasn’t the biggest Planet of the Apes fan, at least in terms of the older movies or that Tim Burton one. I ended up seeing the Burton directed film and at least being entertained a little. My Dad showed us the first Planet of the Apes when we were in high school or college and I really couldn’t take it that seriously. While the iconic twist at the end was memorable, the makeup and campy feel to it was too hard to get over. When Rise came out, I thought the SFX didn’t look the best in the trailers but heard the movie was decent enough. I still didn’t go out and see it. I finally gave them all a chance this week and loved all three. While Rise is a good build up story and the SFX wasn’t there in a lot of the shots. Dawn and War were simply outstanding and they raised the bar quite high for motion capture.

I’m not sure if War is the best in the trilogy or Dawn is but I loved both movies equally. Andy Serkis deserves an Oscar for this. Just how he acts through his eyes is amazing. There really need to be a motion capture acting award because the times are changing and people need to be recognized for their efforts. Not just the people that animated the characters. I was just simply blown away how lifelike and real these characters look. I had to keep saying to myself, this is animated characters. Motion capture has come a long way. I thought Maurice and Rocket were particularly animated well too. I thought several times that Maurice was real and they just animated over the face but nope. Quite impressive!

These movies aren’t just special effects type movies either, there is a story worth following and characters you care about. I’ll admit it was hard to figure out who was who at times but I definitely got sad with War. It’s always the poor Gorillas that get hurt in these. I was hoping Maurice made it out okay since I liked that character a lot. What I love about this one and the overall trilogy is unlike with the original movie, you are really rooting for the apes. Most of the humans in these are assholes so I guess it’s understandable. Still, I like how they had everything centered around Caesar and from the apes point of view. I really wish this wasn’t just a trilogy because I want this to continue; obviously with other characters.

The special features include loads of deleted scenes, featurette on the making of the movie, WETA featurette, music featurette and bunch of other things. There’s over 20 minutes of deleted scenes, which is surprising since the movie is already two hours and half. This must have been imagined as a three hour epic in the early stages. These were great as well because it just features all the actors portraying the motion captured characters. Those suits are so unflattering too haha. I liked watching the featurette on the music since I’m a big fan of Michael Giacchino. I believe they (Michael and director Matt Reeves) were talking with one of the percussionists who worked on the original movie with Jerry Goldsmith and worked on this one as well. Apes: The Meaning of it All is a featurette that talks about all the ape movies, spanning decades. There is a lot of extras to watch so the blu-ray is definitely worth getting. There’s some extras on Movies Anywhere/UV but not all of it.

War For The Planet Of The Apes is one of my favorite movies of the year and just a marvel to watch, special-effects wise. The story is strong as well and I love that this trilogy is ape-centric instead of the human-centric. This isn’t the type of movie I’d watch once and then forget about. I’ll be going back and watching it over and over. I hope they do some new movies featuring Caesar’s son because they finally figured out how these apes should look like. Thankfully it’s not actors in bad makeup with barely moving mouths when they talk. Bring on more Ape movies!

Features:
Deleted Scenes
Waging War for the Planet of the Apes
All About Caesar
WETA: Pushing Boundaries
Music for Apes
Apes: The Meaning of It All
The Apes Saga: An Homage
Audio Commentary by Matt Reeves
Concept Art Gallery
Characters
Drawings
Paintings
Theatrical Trailers