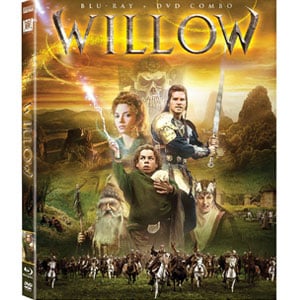 Willow is one of my favorite movies from the ‘80s. It’s got action, humor, and a little bit of romance. Willow is celebrating it’s 25th anniversary and it’s finally available on Blu-Ray! Man, do I feel old!

The fantasy adventure movie follows a little farmer named Willow Ufgood (Warwick Davis). Willow and his children discover a baby whose prophesied to bring down the evil Queen Bavmorda (Jean Marsh). Willow goes on a journey and is appointed with keeping the baby alive. He gets help from Madmartigan (Val Kilmer), sorceress Fin Raziel (Patricia Hayes) and others to take down the Queen and her army before she destroys the baby.

It’s been a couple of years since seeing Willow but the movie still holds up after 25 years. The action is still great, the jokes are still funny and the effects still hold up better than cartoony CGI. In today’s movie world, half this stuff would have been CGI and would looked too cartoonish. This movie revolutionized what movies do today with morphing and other special effects, but it still holds up very well and doesn’t look bad. The closeup of the brownies is sometimes a bit fake but whatever, it’s a fantasy. I still prefer matte paintings, puppets to most CGI these days.

People will say this is a Hobbit rip-off and they kind of have a point but I don’t really care. I love both movies! They are slightly different. What I love about this movie is Val Kilmer’s Madmartigan character. I’d want to see a sequel just for his character. The interactions between him and Willow are great, and then you have Kilmer and Whalley together and it’s even better. You got lines like “I don’t love her, she kicked me in the face” and “get your hair out of my face or I’ll chop it off.” Those lines are awesome and still crack me up!

The Blu-Ray quality of the movie is a bit grainy, at least with my LED TV. Still, it still looks great on the Blu-Ray and obviously prefer that to DVD. The special features has new introductions & interviews with Ron Howard, Warwick Davis and Dennis Muren but a lot of the stuff is from previous DVD extras. I always forget there was this whole deleted storyline with Sorsha’s Father, who was king of Tir Asleen (a.k.a. the dude in the ice). I honestly thought that stuff should have been left in the movie because it gives a bit more depth to Sorsha.

Willow is a fun fantasy/adventure movie that teenagers and older will enjoy. Some scenes are a bit scary for little ones, I know I was always freaked out by the trolls when I was younger. But, the movie still holds up very well after all these years and I’m glad it’s finally available on Blu-Ray.