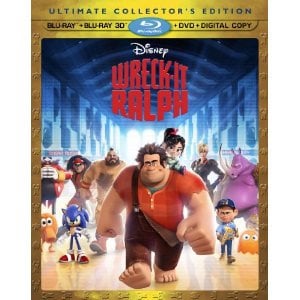 Wreck-It-Ralph is a fun animated movie that brings me back to playing games at the arcade. While Sarah Silverman’s voice/character is annoying, there’s a lot to love about this movie!


The animated movie is about arcade video games coming to life after the arcade closes for the night. All your favorite games have lives outside of their video game lives. They have family and friends, have parties, go to villain anonymous meetings. Ralph (John C. Reilly) is a bad guy who nobody likes and he doesn’t really have a home besides a big mountain of 8-bit bricks. Ralph is sick and tired of being the bad guy in the game and wants to be good. So he ventures out of his own game and into another to re-discover himself. He meets a computer glitch little girl Vanellope (Sarah Silverman), who wants to be able to race in the game Sugar Rush but she’s not allowed. So Ralph decides to help her out. While that is happening, Fix-It-Felix, Jr. (Jack McBrayer) joins forces with Sergeant Calhoun (Jane Lynch) from Hero’s Duty to get Ralph back to his game before they pull the plug on their games.

I love watching Wreck-It-Ralph and brought me back to a time I used to play video games as a young little lad. I kind of don’t play games anymore because I don’t have the patience for it but I love the old Nintendo games and even the arcade consoles. The movie had all the little references to video games: the 8-bit look to some things, the noises, the way they moved and the different styles of video games over the years. The Donkey Kong style games, the car racing games and the first person shooter games were all well represented here. If you’re a lover of video games, it’s very easy to love this movie.

I thought Wreck-It-Ralph was similar to Toy Story in a way because the video games characters come to life when humans aren’t really interacting with them. This isn’t a Pixar movie but it kind of is since John Lasseter executive produced the film. John C Reilly as Ralph was cool, and Jack McBrayer as Fix-It-Felix, Jr. was perfect I thought. The only complaint I had was with Sarah Silverman. Her voice is irritating just in a normal pitch, but she’s talking like a little girl so it’s even more annoying. There always seems to be one annoying character in a Disney animated movie for me. Ellen in Finding Nemo and Eddie Murphy in Mulan come to mind.

On the Blu-Ray special features, you have “Paperman” animated short, behind the scenes stuff, deleted scenes and video game commercials. The first thing I always watch in the Disney/Pixar movies is the animated shorts. The short was done in a black & white / gray 2D animated feel and was a good short. Nothing was said in the short and it’s just about an office worker trying to get the attention of a young lady he met from across the street. I hope the animated short trend continues with most Disney movies. Rather watch that then 20 minutes of commercials before a movie anyway. The behind the scenes stuff is cool but I loved the fake video game commercials. The commercials were based on the games in the movie and they made them all vintage-y style to match the years the games came out. Very clever and funny.

Wreck-It-Ralph is a cute, clever nod to video games and Disney has it’s first potential animated franchise that doesn’t necessarily have Pixar in front of its title. The movie has gotten recognition by its peers and by fans as well. It’s definitely worth seeing if you enjoy video games and animated movies!