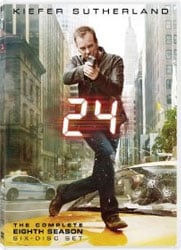 24: Season 8 is out now on Blu-Ray and DVD and it’s the final season of this action-packed, thrilling TV series. Unfortunately, This series has gone downhill in it’s later years but it’s still highly entertaining! Season 8 may not be the best season but fans will still want to own it on Blu-Ray & DVD.

Season 8 takes place in New York City. Jack Bauer (Kiefer Sutherland) is called back into action for the last time when President Taylor’s (Cherry Jones) press conference with a fictional Middle Eastern country Islamic Republic of Kamistan (IRK) is disrupted with assassination attempts and threats. Terrorists from that country are upset that President Hassan (Anil Kapoor) is cooperating with President Taylor. They plan on going after Hassan and New York City as well with biological weapons and dirty bombs. CTU is back in business and one of the NY offices is being run by Hastings (Mykelti Williamson), along with Chloe (Mary Lynn Rajskub) and some newcomers. Like always, things happen unexpectedly and their are many twists, like who’s really behind the assassination attempts and weapon threats. One thing is for certain, Jack Bauer will get to the bottom of it!

I’ve been a devoted fan of 24 for most of the seasons. It was something about this season that I just didn’t like originally and finally bailed on the show around 10 episodes. I just didn’t take care anymore. Besides, I figured I’d just watch the rest on video (like I just did). But many of these things that happened in this season, have happened already in previous seasons. Sure, it was nice to have the setting of the show finally not take place in Los Angeles. DC was the previous season and NYC was this season. It would have been nice to get some non-fake NYC shots, but the show had to be cheap and shoot the show somewhere else.

Katee Sackhoff’s character Dana & storyline was perhaps one of the stupidest on the season/series. Who gives a crap about her ex-boyfriend who just got out of prison? That whole storyline was one of the biggest reasons why I bailed on the show. And then to find out that she was a mole in CTU? Another CTU mole? How many moles are in CTU, it’s just raises questions about the screening process of the agency, if it actually existed. WikiLeaks would have been all over that (haha).

24 always recycled bits from previous seasons, but this season seemed like there was more than the usual stuff. Russians and Arab terrorists, President Logan crap, head of CTU is replaced, there’s a CTU mole, Jack does something crazy, Jack goes rogue, someone close to Jack dies, Jack says “dammit!”, Chloe looks confused and awkward, the President does something rash, President’s staff betrays her, irrelevant plot lines that add nothing to the overall story are used….the list can go on and on. The amount of moles and hidden spies on this show just gets so tiresome after awhile. But with all that said, I actually liked this season after giving it a second chance. Well, let me re-phrase that; I like the second half of the season. I’m not happy with one of the character’s death but I guess they needed to motivate Jack from going berserk and uncovering the truth. The episodes I didn’t end up seeing were definitely far better than the ones I originally saw in the beginning. It somewhat redeemed the season. Almost.

The 24: Season Eight DVD extras were decent enough to watch after you’re done with the episodes. For starters, some select episodes are extended episodes. For the majority of the episodes, there’s quick featurettes called scenemakers that shows you how things were done for the specific episode. Besides that, there’s deleted scenes and a few other featurettes. While I like the extras, I just wish they were all in one disc instead of spread out onto all the discs.

24 is done and gone on TV but there’s always that chance it will be made into a feature-length movie. Scripts and plans for that are being worked up now so fans shouldn’t give up hope that this is the last we’ve seen of Jack Bauer. Season 8 is highly flawed yet still an entertaining season. The second half is by far the better half but might be a chore to sit through all the 24 cliches to get to it.

Bottom Line: Not the best season but not the worst either.
Running Time: 1056 mins
Rating: NR
Extras Rating:
Overall Rating: