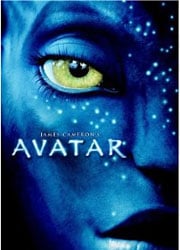 The biggest movie ever has arrived on DVD and Blu-Ray. Since I’m too much of a cheapskate and don’t own a Blu-Ray player, I have to settle with just the DVD. I’m sure this movie looks beautiful on Blu-Ray but it’s not bad on DVD either. If you’re in a hurry to see Avatar, this is the DVD to get. I’m not sure this DVD edition is the right one to get though because you know Fox will be pumping out plenty of special editions DVDs in the near future. This is simply the appetizer until the real DVD & Blu-Ray come out later this year.

Everyone and their mother has seen this movie so it’s kind of pointless to talk about the story of Avatar. But to fill up space, might as well at least talk about the basic plot of the movie. Avatar takes place in 2154 on Pandora, a moon that’s very Earth-like with plenty of enchanting plant & alien life. Humans are mining Pandora since it has very rich minerals there. Inhabiting Pandora is the Na’vi, giant blue creatures that are one with mother nature. In order to mine there, the RDA corporation has a science team to research the Na’vi, the atmosphere and everything to do with Pandora. The science team grow hybrid Na’vi bodies called avatars, and the scientists are mentally linked to them so they can walk around in those bodies. Sounds weird but trust me, it’s not as confusing when you’re watching the movie.

A paraplegic former Marine Jake (Sam Worthington) replaces his scientist twin brother who got murdered. At first, the rest of the team are skeptical about Jake but he comes around. While Jake is in his avatar body for the first time, he encounters a bunch of wild creatures that want to kill him. But he’s rescued by a female Na’vi warrior, Neytiri (Zoe Saldana) and she brings him to the spiritual leader of the clan. She instructs Neytiri to teach Jake the ways of the Na’vi. They begin to form a relationship, and Jake is torn between the Na’vi world and real life. Eventually, Jake “goes native” and is oppose to what the RDA corporation is doing on Pandora. In the real world, the RDA corporation and their meathead special ops army are growing tired of waiting and begin to press further into the Na’vi territory. Jake and the scientists team try to find a way to prevent genocide and not have the corporation take over the world they have grown to love.

When I saw Avatar in theatres, I was blown away at the special effects. Seeing it in 3D was simply amazing and this is probably the best 3D movie to come out yet! A lot of other movies have a long way to go to catch up to Avatar. This was a movie made for 3D and just wasn’t added on last minute to jump on the 3D train. Even without 3D, this movie is just excellent. Storywise, it’s pretty much like Dances with Wolves except replace American Indians with the Na’vi. The real story of the American Indians is similar to the Na’vi. White man (RDA Corporation) colonizing and disrupting the inhabits of the land, the Na’vi are one with nature, ride on horse like animals, use primitive weapons, etc… The list goes on and on.

But back to the special effects. I thought the best performance of the movie was from Zoe Saldana. Whenever Neytiri was on the screen, my interest just peaked up because she was so good. Just the facial expressions alone made her Na’vi character really believable. Her performance equals that of Andy Serkis as Gollum in Lord of the Rings. That’s my opinion anyway. Sam Worthington did a good job and proves he can lead a movie. I’m sure we’ll be seeing him even more after this and Clash of the Titans. I thought Stephen Lang played the bad guy quite well. Unaffected by what was happening during battles, he cared more about getting home for food. Every bad guy has their quirks I guess. Sigourney Weaver is always good in her roles, so it was cool to see her in another sci-fi flick. I thought they could have cast someone differently than Giovanni Ribisi though. He’s a little twerp in the movie but I thought they could have gotten someone a little more dick-ish.

James Cameron wrote the movie, as well as directed it. He oversaw the special effects as well. His presence is all over this movie, without actually being on screen. I love James Cameron movies because each one is so big and epic. The mythology, the landscape and the characters he created are going to be remembered for a long time. This is this generation’s Star Wars, especially if there are more sequels in the works. Pandora is so pretty to look at, and just looks like a lot of fun to live in. And the result of that is you have many depressed nerds wanting to kill themselves because they aren’t on Pandora. That right there shows you have a franchise on your hands; when you have a bunch of geeks obsessing over it.

A special edition Avatar Blu-Ray and DVD edition are coming out in November (and I’m sure beyond) so this edition doesn’t have any extras on it. It’s just a ploy to get fans to spend even more money. But one good thing out of this is you don’t have to wait until November to see Avatar in your own home. Just sucks there wasn’t any initial effort for the first DVD.