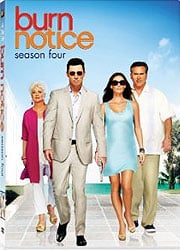 Burn Notice is one of my favorite shows to watch in the Summer. It’s got that summer-y feel since it takes places in Miami and has hot chicks in bikinis. Can’t go wrong with that. I think this season was quite enjoyable and keeps you guessing what’s going to happen next.

Season 4 of Burn Notice is about the list of people that have burned Michael Westen (Jeffrey Donovan) and the spy Jesse (Coby Bell), Michael unknowingly burned. Michael begins to do shady work for a new handler called Vaughn (Robert Wisdom) and Vaughn tells him in order to get back into the good graces of the organization, he has to do his bidding. The result of that is accidentally burning domestic spy. Jesse doesn’t know Michael burned him but comes for help, and in a way joins the team of Michael, Sam, and Fiona. Even Michael’s mom takes Jesse under her wing and tries ot make him to the right thing. Eventually Jesse learns the truth and is torn between killing Michael or continuing to work with him. Towards the end of the season, Michael discovers a list of people that have burned him but that information is deadly. Essentially, Michael has to go up against Vaughn and some former enemies, along with trying to uncover who burned him.

I really liked this season of Burn Notice. The addition of a new cast member was needed, and added a new dynamic to the overall story. Plus, it gives someone else a chance to come into the spotlight. I think we’ll begin to see more of Coby Bell from now on. He adds good chemistry with the cast, and can do the same stuff as Michael Western because he’s a spy as well. The same formula of helping normal people, find out who burned Michael was starting to get old but glad they went with this approach. At least now they can have Jesse help out normal people with their problems, and let Michael deal with the organization and the people who burned him. Plus, the addition of Jesse kind of makes things uncomfortable for Michael and Fi since there seems be setting up some sort of love triangle on the show. Besides the addition of Coby Bell, the rest of the cast still do an awesome job on the show. I mean, the show wouldn’t be what it is without them. Just everyone has good chemistry on the show, and are very likable.

The DVD has it’s fair share of extras on each disc. While it’s great to have a lot of extras, it would be nice to have them all in one spot. The first disc has some featurettes about Sam, the stunts and a funny gag reel. Gotta love gag reels! Other discs have deleted scenes, and the last disc has a Roast between White Collar and Burn Notice, audio commentary on the last episode and a random White Collar pilot episode. I guess they want Burn Notice fans to watch White Collar huh?

Burn Notice Season 4 is probably one of the best seasons because it has everything we loved from the previous seasons. Plus it has some new dynamics like the addition of Jesse, and Michael getting so closed to finding out who burned him. Pick this DVD up if you like to watch the show!