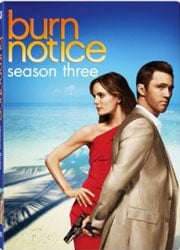 Burn Notice is in its fourth season right now, but the third season was just released on DVD! Before seeing the newest season, you should see the third season just to see what went on with our favorite burned spy Michael Weston!

For those who haven’t been watching Burn Notice (for shame!), it takes place in beautiful Miami and is about burned spy Michael Westen (Jeffrey Donovan). Burn means he’s stuck in some location without any money, credit, jobs or any of that. So usually Michael takes up jobs helping incident people out, getting help from his fiesty on and off again girlfriend Fiona (Gabrielle Anwar), his ex-Navy seal buddy Sam (Bruce Campbell), and sometimes even help from his chain smoking mother (Sharon Glass). Season 2 ended with Michael jumping out of management’s helicopter, the people who burned him. So that’s exactly where we begin the third season.

Michael swims into the ocean and immediately has to deal with the police going after him. He ends up getting caught but is released, and he’s also still burned and in even more danger than he was. That’s because “management” isn’t protecting Michael anymore so a lot of bad guys from Michael’s past come back to haunt him. Michael tries to get back into the good graces of the management, while protecting his family and friends. Michael goes back to doing what he does best, helping others out and trying to figure out how to get un-burned. Michael is approached by Strickler, a slimball that wants to hire Michael as a glorified mercenary pretty much. Michael plays along until he figures out what his real objective is. In the middle of the season, things switch gears a bit. Michael gets recruited by Strickler’s associate Gilroy, who wants Michael to do some shady things as well. By doing business with Gilroy, things turn sour between Michael and Sam/Fiona. Thankfully Michael comes to his senses at the end of the season to realize he got caught up into some dumb stuff. At the end of the season, the trio have to face a pyscho spy named Simon who’s after Michael and also management as well. He’s a spy as well, but likes to put people in harm’s way.

The third season of Burn Notice was just as good as the other seasons. It was a bit different than usual, but I liked where the series has gone since the beginning. Things were changed up a bit when Michael was working for some bad guys and then going up against Simon and the people that burned him. But what makes the show a guilty pleasure escapism show is that it takes places in Miami, and each week Michael Weston is doing these one off jobs for various people. There’s a bigger storyline mixed in there as well but this is a great show to just start watching from anywhere. I mean, you’ll probably need some background on the show though.

I thought the second half of the season was the strongest, and felt the first half was a little bit off from its usual self. I’m not saying it’s bad, just liked the storylines better in the second half (or the winter season). Burn Notice continues to get interesting character actors and special guest to appear on the show. Fans of Cagney and Lacey will be happy to see that Tyne Daly guest stars alongside her old co-star Sharon Glass in one episode. Also appearing in this season include: Moon Bloodgood, Jude Ciccolella, Chris Vance, and sometimes Burn Notice director/actor Tim Matheson. But guest stars aside, what makes this show so fun to watch is because of the 4 main stars, especially Jeffrey Donovan, Bruce Campbell, and Gabrielle Anwar (no offense to Glass). Breaking up that threesome in the show would be crappy I think so I hope it never comes to that.

The bonus features on the DVD include a a stunt featurette and footage from the Burn Notice 2009 Comic Con panel. The stunt footage was interesting to see how much planning and thought went into one of the exciting car crashes in the show. They even showed some footage of when things didn’t go as planned. The Comic Con stuff was cool to see, since I didn’t go. Bruce Campbell was playing off the crowd nicely, as a lot of people just watched until Jay Karnes brought up the fact that everyone was there to see Bruce.

If you enjoyed the other season of Burn Notice, I don’t think you’ll have any problems with this season then. Be sure to get the third season DVD to check out the special features, plus it’s just nice to own the show without any commercials!