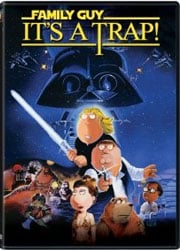 It’s A Trap is a spoof on Star Wars Episode 6: Return of the Jedi. The power goes off yet again and Peter Griffin finishes the Star Wars trilogy and puts all the Seth MacFarlane characters into the trilogy. This time some characters from American Dad and The Cleveland Show make appearances as well. The beginning scroll of the movie has Seth MacFarlane/Family Guy creators complaining about Fox wanting them to do another spoof in the trilogy and how this one isn’t as funny. Than after that just imagine Return of the Jedi with Family Guy characters and lots of Ewok jokes and you have It’s A Trap.

I was really looking forward to see this one, considering I loved the previous SW spoofs from Seth MacFarlane and company. I have a feeling they ran out of steam for this one but I might have said that for all the SW spoofs. The first time I watched the movies, I usually laughed but then feel underwhelmed afterwards. I soon find myself watching them over and over and finding new things to laugh about. I think the same will happen for It’s A Trap because I thought it was the weakest out of the bunch on my initial viewing. There are still funny things in this, but like I have been saying for the last few years; there’s so much potential to deviate from the main storyline and make the spoof more original like Spaceballs. Having the story and animation copy the exact scenes from the movie is cool but shouldn’t be like that for the entire movie. Peter is the one telling the story; you’d think he’d make some insane shit up as he went along to maybe make Star Wars a better & funnier story? That could be a nitpick though? I can’t really talk about ways of fixing the spoofs if I still love them and watch the hell out of ‘em.

The DVD and the Blu-Ray, for the most part, have similar extras. There’s some random voicemail message from Darth Stewie to his son Luke, Star Wars Trivial Pursuit with the filmmakers of Family Guy, drawing featurette with animator and director Peter Shin, some quick sock puppet outtakes and one or two other things. Watching the animatic stuff was cool to see, and I definitely enjoyed Peter Shin drawing some of the Family Guy/Star Wars characters. Watching things like that always makes me want to be an animator. But then I realize it would be a pain in the ass to do that for living haha. The Trivia Pursuit thing wasn’t that special, just watching Family Guy people play the game (which I also own by the way).

The final Star Wars spoof seems like the jokes were more spread out than the others. They, the filmmakers, even admitted to lower your expectations on this one, which isn’t really a good selling point. But with that said, I still laughed like crazy during scenes from It’s A Trap and like this trilogy as a whole. It’s something I can put on and laugh every time I watch it. I hope they continue to make other spoofs, just not Star Wars. Maybe do Back to the Future or Indiana Jones next? Or have they done enough references to those movies already?