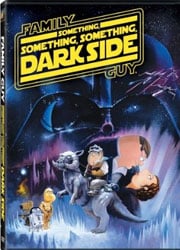 Just like Blue Harvest, the Griffins are sitting in the house watching TV and all of a sudden, the power goes out. The family encourages Peter to tell them another Star Wars story while the power is out. After getting sidetracked with trying to tell the story of Black Snake Moan, he continues on with the story of Empire Strikes Back. There’s really no sense telling you the plot of the movie since everyone knows (or should know) the plot of Empire Strikes Back. Peter is Han Solo, Chris is Luke Skywalker, Lois is Leia, Stewie is Darth Vader and Brian is Chewbecca. I don’t want to spoil which character Meg is this time. Let’s just say it’s pretty funny. Playing Lando is Mort, which is kind of weird but it works. The movie referencing, surfer dude Carl ends up playing Yoda. Just picture all those Family Guy characters in Empire Strikes Back and that’s what you got.

People will begin to compare the two Star Wars spoofs, debating which one is funnier. I think they are both equally funny. There are lots of funny moments that will make you laugh out loud, and sometimes there are moments where you’ll just smile. Some of the jokes fall flat as well, which is to be expected when watching Family Guy. I think the biggest problem with Family Guy’s spoof on Star Wars isn’t the material they doing, it’s just following the movies too closely. They pretty much animate right over the original material, and follow the storylines very closely. I think it would have been a little bit better if they changed up the storylines a little, and be a little bit more creative. At times I felt like I was just watching a bunch of friends make jokes while watching Star Wars. It had that feel to it. I also think they missed some key spots for spoofing, like how Leia and Luke kiss in the hospital room. I don’t even think that was even referenced? But with that said, I still laughed my ass off at this DVD.

The scrolling intro text was hilarious to read; the funny cameos of Joe Swanson, Meg, Cookie Monster, James Wood, and James Caan were hilarious. It was good to see Cleveland back as R2D2, sporting winter clothes in Hoth. There’s a funny scene with him later on in Bespin. I found myself cracking up the most when the Family Guy characters would drop F-bombs or do something you weren’t expecting. Just wait to hear how Han Solo responds to Princess Leia when she says she loves him at Bespin. I loved the scene where Darth Stewie is gathering his bounty hunters and you see Dog the Bounty Hunter there. The great thing about Family Guy episodes and the Star Wars spoofs is that the more times you watch them; you pick up new things that are funny. I’m sure every time I watch this; I’ll like it even more than the last time. There are still things I pick up when watching old episodes. The ending of SSSDS is great, and involves another classic that Family Guy likes to reference a lot.

The movie last about 54 minutes long, but there are some extras to check out the DVD and Blu-Ray releases. There is audio commentary, there’s a pop up video that I’ll probably watch the next time. There’s a featurette on the poster art, plus a sneak peek at the next Family Guy Star Wars spoof called “Family Guy -Episode VI: We Have a Bad Feeling About This.” You see the cast just doing a table read from scenes in Return of the Jedi. That will probably be released sometime next year.

Is Something, Something, Something Dark Side funny? Yes I think so, but others may disagree with me. I think Family Guy is the type of comedy that gets better with each viewing, and think this DVD will grow on people when they watch it again. I think these are great spoofs but can be a lot better and more original with the spoofs. Just animating over the original material is okay, but break-away from the storylines a little and change it up. I’d rent the DVD or Blu-Ray first, and then if you like it…buy it! With all the negatives I had to say about this release, I’m still looking forward to the next Star Wars spoofed Family Guy movie!