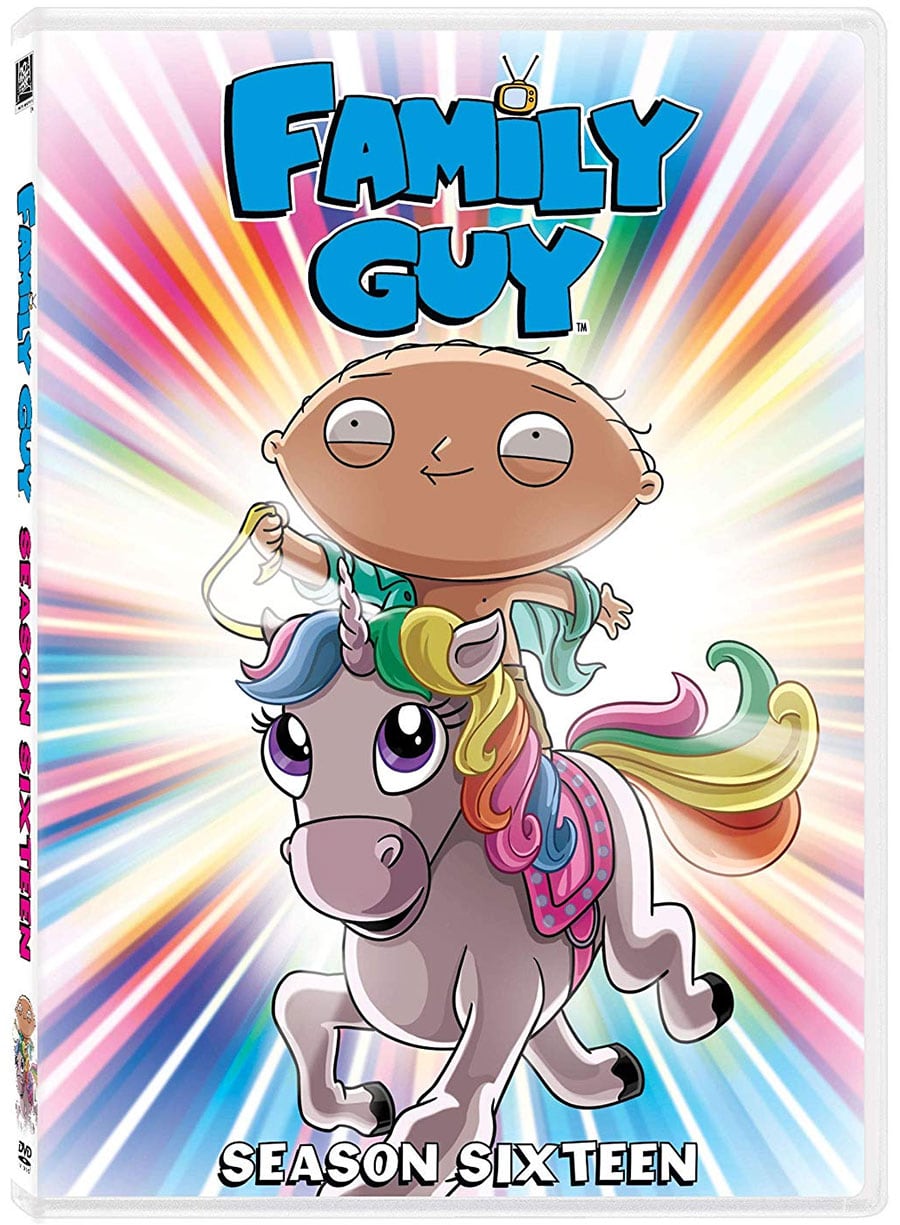 Family Guy is back with a new DVD from Season 16, with lots of high concepts episode and then one just downright irritating episode. For the most part, Family Guy is still funny but depends on your levels of fandom with the show.

This season on Family Guy has a few notable episodes in it. The season starts with Family Guy trying to be an Emmy-winning show by trying to be like Modern Family, The Big Bang Theory, and Transparent. There’s a follow the money episode where Carter gives Chris a dollar for his birthday, and then we follow that buck throughout the episode. There’s an episode called Three Directors where they show 3 different ways of Peter getting fired from the brewery, done in the stylings of Quentin Tarantino, Wes Anderson, and Michael Bay. Then there’s an episode that imagines The Griffins as a family that has been on for decades, showcasing each decade.

There’s also basic episodes like Brian sends out a stupid tweet and causes an uproar, and the Griffins have to banish him from the house. Brian and Stewie think the school Principal killed his wife and try to spy on him from across the street. Brian enters a dog pageant just he can get the chance to have sex with the female dog he met, Peter becomes a millennial, goes under a coma and interviews God and Joe, Cleveland and Peter are forced to join the Coast Guard. The worst episode of the season was with Ian Mckellen as he plays Stewie’s shrink. It’s just a not-funny, annoying episode and not sure the thinking behind it really.

The rest of the season was pretty funny, but I guess it depends if you’re a hardcore fan like myself. I find Family Guy gets funnier with each watch, meaning the more times I watch it, i’ll find new things to laugh about. The show is so rewatchable so even if I didn’t laugh the first time, the second time watching it I might. This season was really funny the second time watching it. The Three Directors episode was great, I liked the Patrick Swayze Christmas episode, the episode where Family Guy covers each decade was pretty funny too. I actually liked this season better than Season 15.

The DVD contains deleted scenes and animatic for the three directors episode. The DVD looked decent enough and sometimes I would notice that this wasn’t in HD. Perhaps the upscale on the DVD was helping a little but wish they would just release these on Blu-Ray and Digital HD already. It’s beyond irritating watching something in HD when it airs, and then watching something of a downgrade when it’s released to own. It’s a bit dickish if you ask me, and cheap. And it’s 2018, include a freakin’ Digital HD with your releases!!!

Family Guy Season 16 has a lot of funny episodes in it but I’m sure you’ll get people that don’t like the show as much as they used to. I still laugh a lot watching the episodes and enjoy re-watching the show like crazy. It’s a good show to put on when you can’t find anything on TV and you know you’re going to laugh. It’s not a good show to put on when you have the flu, which I did. There’s just too much puking and gross things happening that you makes you want to throw up even more.