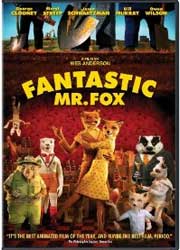 Fantastic Mr. Fox is the latest movie from quirky director Wes Anderson. I’m not really a fan of his movies but I was curious to check out Fantastic Mr. Fox anyway because I love stop motion animation. Plus, this was nominated for best animation at the Academy Awards and has a stellar cast. While I didn’t outright enjoy this, I certainly appreciated it.

The movie is based on the best-selling book from Roald Dahl (Charlie and the Chocolate Factory). It’s about Mr. Fox (George Clooney), his wife Felicity (Meryl Streep) and their life living near a farm. After being stuck in a fox trap, Felicity reveals that she’s pregnant. 2 years later go by and their emo son Ash are living in a hole. They want something better, so Fox moves into a place that is at the base of a big tree, while not listening to the advice from his lawyer Badger (Bill Murray). But it’s right near the 3 big farms in the area so it eventually causes a problem for everyone. It’s a problem because Fox goes back to old ways and continues to steal from the farms with his friend opossum Kylie (Wally Wolodarsky). Sometimes his son or nephew tags along. The three farmers plan a trap for Mr. Fox but only manage to shoot off his tail. They vow to get revenge and try to kill all the animals in the area. While almost accepting defeat, the animals fight back with a clever plan.

After watching this movie, I’m not sure what to make of it just yet. Couldn’t tell if the movie was meant for just kids, or parents or both? I never read the book when I was a little so I don’t really know the story all that much. I thought the movie was really slow in the beginning, and not that exciting. I thought the second half was far better and reminded me of the movie Chicken Run. Or did Chicken Run base their story on this book? The main reason why I wanted to check out Fantastic Mr. Fox was for the animation and it didn’t disappoint! In fact, I think that’s the main reason to see this. The story is okay, and has some cutesy things that both kids and parents will like.

The acting was all right, I think it would have been better if I didn’t recognize some of actors/actresses voices like Clooney, Murray and Streep. I liked them in the roles, but I think the downside to having a well known cast is that there voices are so recognizable that it’s distracting. I also felt just people were just reading their lines and not putting any emotion into it. And another thing, I really can’t stand when movies have voice-overs in certain spots where you know it was recorded in a room or over the phone. Stop that! It’s distracting! But I think kids won’t have a probably with that, just nitpicking movie reviewers like myself.

I felt Wes Anderson’s direction was interesting, and I liked some of the things he did with this movie. I’m not sure I would watch this again anytime soon though. If I was a kid, I don’t know if I would have liked this movie just based on his direction and style. It might bore kids to death! But this is coming from a guy who hated Rushmore and Anderson’s other movies.

The extras on the DVD include a quick featurette called “From Script to Screen,” another one about the puppet stop motion animation, and super quick featurette about whack-a-bat. It was nice to see the first two featurettes, but wish they were a bit longer. I would have liked to have seen the actors voicing their parts and more behind the scenes stuff. I liked seeing how they did some of the puppet animation.

Overall, I didn’t outright hate Fantastic Mr. Fox. I didn’t love it either; I’m somewhere in the middle. I liked the second half a lot better because it was more interesting to me. After thinking about it more, I felt this movie would have worked better with lesser known actors voicing the roles. I’m not sure kids will like this one as much as Pixar movies. I still don’t know what to think of this. I really liked the animation and wish there were more stop-motion animation movies.

Features:
From Script To Screen
Still Life
A Beginner’s Guide To Whack-Bat