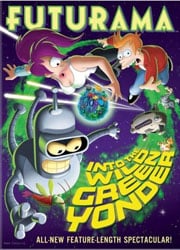 Futurama: Into the Wild Green Yonder could very well be the last Futurama movie/episodes we’ll see. But for some reason, I think it will return in some shape or form. Futurama isn’t currently in production but that doesn’t mean Fox & Groening won’t be making any more Futurama. We shall see though. This 4th DVD installment of Futurama has a few laughs but I think it’s the weakest DVD out of the 4 DVDs.

The movie starts out with The Planet Express crew visiting Amy’s parents. They are knocking down the old Mars Vegas and putting up a new one. While that is happening, Fry gets into an accident from the deconstruction and a group of eco-feminists are protesting Leo Wong’s Mars Vegas project. He’s ruining the universe or something like that? Leela joins the militant eco-feminist group and starts to go after Wong’s new project; the biggest miniature golf course in the solar system! Amy doesn’t like that much either and joins Leela’s group.

Meanwhile, Fry thinks he can hear people’s thoughts now and someone named Hutch tells him he can read minds as well. He advises him to wear a tinfoil hat to block his thoughts from being heard. Other mind readers start coming out of the woodwork and a secret organization recruits Fry to rid the world of latest threat. The other subplot is Bender having a robo-affair with a robot crime boss’ wife. As you can tell, the story is all over the place. Or maybe I just can’t describe it in one paragraph?

I thought the latest Futurama offered up some laughs but I was generally getting bored with this really quickly. It’s sad to say but I wanted to like this. I laughed at parts but I think what kills this is the hour and a half length. There’s too much filler and not enough interesting parts. I felt the other DVDs were stronger, but the general consensus is that everyone is glad there’s new Futurama out there, it’s just not as good as the TV series. This one might get funnier with multiple viewings but the first time around, I didn’t like it as much. I did like the ending because it felt like closure. If this really is the last Futurama movie or episodes we’ll see, it sums up the show nicely. Let’s just say it’s something fans have been waiting for since Season 1.

The DVD extras include an audio commentary, a mockumentary about how the show is made so good, a quick featurette on Penn Jillette voicing his real life self on the show, how to draw Futurama featurette and lots of other random Futurama things. The extras may not be that long but there are certainly a lot of things to check out. I always like seeing the actors voicing their characters and I also love watching animators do their magic. You get to see a little bit of that in the How to Draw Futurama featurette. I didn’t listen to the commentary but usually Matt Groening commentaries are never boring. This time there seems to be a lot of people present during the commentary, which can result in a chaotic sounding commentary. Fans of Futurama will enjoy these extras though.

Futurama: Into the Wild Green Yonder is okay, but not great. It adds a little bit of closure but still leaves things open at the same time. Out of the 4 DVDs that have been released, this one was my least favorite. I just felt bored with it after awhile but maybe other fans of the show will have a different opinion?