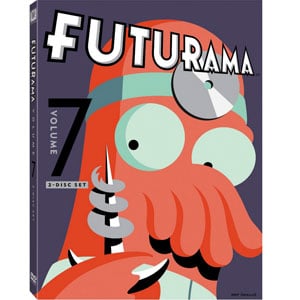 Futurama has returned from the dead and on Comedy Central now, the latest volume is from Season 7. There has been a Season 5 that was technically straight to DVD movies and Season 6 which was the first full season since Fox. Season 7 offers up some laughs, but sometimes the episodes are just meh.

Volume 7 starts with the episode where Bender impregnates the Planet Express soda machine. Fry loves the soda machine, even though he’s turning green from drinking all the Slurm. The next episode pokes fun at the Mayan 2012 prophecy with it’s own end of the world scenario with a Martian prophecy 3012. Some other episodes include: Zapp starts to date Leela’s mother, Hermes replaces his body with robotic parts, The Professor’s parents are still alive, and the crew stages a casino heist.

I’ve watch Futurama since it started but gradually my interest has trailed off. I haven’t been watching the new episodes and don’t think they are as good as the earlier episodes. I always thought the show’s prime was seasons 1 through 3. Everything after that just gets weirder, more obscure and not as funny. Or maybe I’m just not that interested in the show as much as I used to be?

The new season has it’s funny moments here and there, but I just get bored with it after awhile. Do I really care about all these robots they have on the show. Do we really need an entire episode of Calculon? The show isn’t as good as it used to be is pretty much what I’m saying. Others will disagree and I’m sure many people still enjoy Futurama, it’s just not the type of show I will schedule around to watch.

The DVDs special features include audio commentary on all 13 episodes, a bunch of deleted scenes, a jam session with the TV series composer, karaoke sing along and some other things. There’s a decent amount of stuff on here to watch after the episodes, which has always been the case with Futurama and The Simpsons. I liked watching deleted scenes and the jam session with Christopher Tyng; I’m always a fan of the composer featurettes. Like the Simpsons sets, the way the DVDs are held together will increase scratching so beware of that when buying. Not sure if the Blu-Ray is any different.

Futurama Volume 7 is worth getting if you still enjoy the show and don’t want to watch it on Comedy Central with commercials.

Bottom Line: Some funny episodes but not as good as it used to be
Running Time: 296 mins
Rating: NR
Extras Rating:
Overall Rating: